Historical Bastards Revisited – Sargon of Akkad: Just Like Moses, Only Bloodier, and Not Egyptian (reigned 2334-2279 B.C.)


by DoolinDalton
by Brian Thornton
A decade ago I wrote a book of thumbnail sketches of "Great Men" (Well, mostly men. There were a few "wicked queens thrown in there, too.) of ancient history – The Book of Ancient Bastards. It's the only one of my twelve books to go out of print, but it still manages to occupy a place near and dear to my heart.


So I've decided to resurrect the content of these character sketches in coordination with the launch of my new author's website. I'll be resurrecting my original blog, The Weekly Bastard, over there once it's up and running later this Summer.
So for this week's Sleuthsayers contribution, I've decided to give my readers (BOTH of you!*rimshot*) a foretaste of what's to come with the soon-to-be-resurrected Weekly Bastard. And with that, let's talk about Sargon of Akkad!
*     *     *
But because of the evil which [Sargon] had committed, the great lord Marduk [personal god of the city of Babylon] was angry, and he destroyed his people by famine. From the rising of the sun unto the setting of the sun they opposed him and gave him no rest.
– The Chronicle of Early Kings
Imagine what it takes to forge a collection of petty, warring city-states into a unified, multiethnic empire. In a word: “bastardry”! Not necessarily out-and-out evil, but definitely bastardry.
Empire-builders down through the ages have been veritable poster children for the notion of “bastardry”: Alexander, Caesar, Charlemagne, Napoleon, Hitler, the list is long. But who set the first example that so many conquerors have followed?
Ladies and gentlemen, meet Sargon of Akkad, the first bastard (but hardly the last) to build an empire through conquest.
Haven't We Heard This Story Somewhere Else Before?
Whether you’re a devoted daily reader of the Bible or merely have seen the Cecil B. DeMille movie, you’ve likely heard this story: woman has baby, for debatable reasons woman decides to get rid of said baby, and rather than killing it outright, sets it adrift in a basket on a great river, hoping it will be found and taken in by some kindly soul. Moses, right? Well, yes, but the story of the foundling-who-goes-on-to-be-great is first told in the legendary birth story of Sargon of Akkad. In his case, he is the son not of an Israelite slave, but of a temple priestess, and raised, not by the royal family of Egypt, but by a humble gardener. Still, the whole “baby in a basket in the river” thing is virtually the same (Sargon was set adrift on the Euphrates, though, not on the Nile).

The Original "Tough Guy."
Everything we know about Sargon screams “tough guy”: his rise from humble origins to serve as cupbearer to the king of the city of Kish (a job not as effete as it might sound; it was an influential post in the ancient Near East. The king's cupbearer was responsible for ensuring that no one poisoned his wine.); how that king grew to fear him and his popularity, so sent him to the court of a neighboring king in Uruk, asking that king to kill him, only to have Sargon overthrow the king of Uruk, turn around and go home to conquer Kish, and by extension, the rest of Sumer,  Mesopotamia, and the Fertile Crescent all the way to the Mediterranean Sea. You don’t get these sorts of things done without having a bit of the bastard in you. 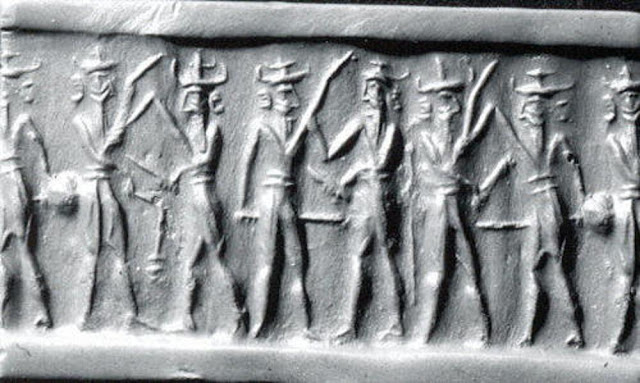 What's In A Name? Everything!
In what today we would call a brilliant piece of "branding," the man who became known as “Sargon” to us changed his birth name from whatever it was originally (we have no idea) to Sharru-kin (Akkadian for “rightful king”), a brilliant PR move, especially in light of the fact that Sargon was a usurper twice over (in other words, not the rightful king).
You Can't Be An "Empire Builder" Without...
Once he’d built up his empire, the “rightful king” ordered the construction of a capital city from which to rule it: Agade. (“Akkad” was a geographic region in central Mesopotamia so-named for the people who invaded and settled there. “Agade” was the capital city that Sargon built.)  So not just a conqueror, but also a builder. 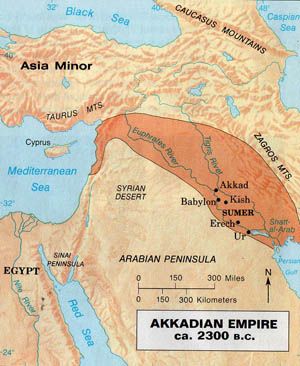 And More Than That, A Survivor.
The king’s own words show that he was most proud of that aspect of his personality. Sargon wrote in his autobiography: “In my old age of 55, all the lands revolted against me, and they besieged me in Agade ‘but the old lion still had teeth and claws’, I went forth to battle and defeated them: I knocked them over and destroyed their vast army. ‘Now, any king who wants to call himself my equal, wherever I went, let him go’!” 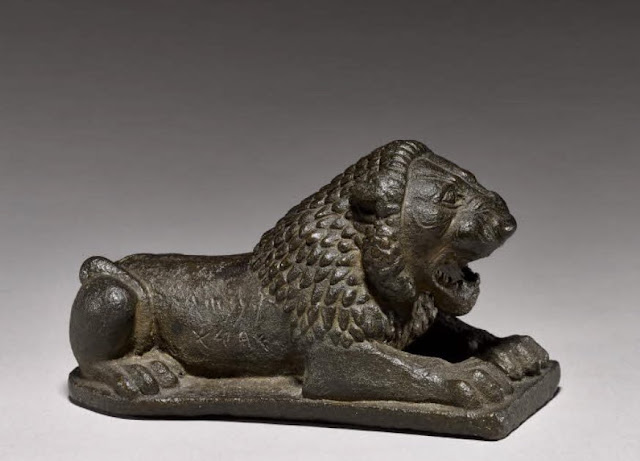 Staying Power.
Sargon didn't just conquer an empire, build a capitol and all manner of infrastructure, all while ruling to a ripe old age. He also founded a dynasty. His kingdom lasted from its establishment in 2334, through Sargon's long reign and those of two of his sons, Rimush and Manishtusu, and only ended after the reign of Sargon's grandson, a pretty tough customer in his own right, named Naram-Sin, who ruled until his own death in 2224 B.C. The empire itself collapsed around thirty years after Naram-Sin's death, but hey, who among us has established something which will last for over a hundred and thirty years?