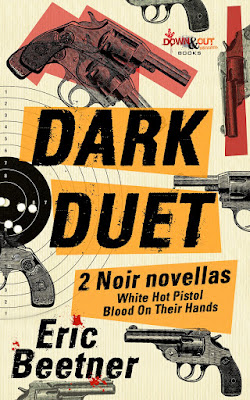 Eric Beetner's Dark Duet (released last month by All Due Respect) is a two-novelette excursion to Bishop, a small midwestern town where the strong prey on the weak and violence erupts without warning.  It's John Mellencamp's Small Town re-imagined by GG Allin. It's Mayberry with Sam Peckinpah at the helm.

The first novelette, the previously published White Hot Pistol, veers from dark to pitch black. It's a superbly written tale of small town dystopia and family chaos, where the violence careens from gunplay to sexual mayhem.

Prodigal son Nash has come back to Bishop, "a speck on a map, a town full of dead ends," to rescue his teenaged stepsister Jacy from a horribly abusive home. Their stepfather Brian Thorpe is a sociopathic sexual predator who happens to be the town Sheriff.  On their way out of town, Nash and Jacy have a deadly encounter with a meth head that, like nuclear fallout, spreads menacingly fast. Soon the town's psycho drug lord wants them dead.  Brian will stop at nothing to keep his dirty secrets hidden, but his step children prove remarkably resilient. The body count is high, and the action sequences are dynamite. Everything builds to a bullet-riddled showdown where the outcome is always in doubt.

We're back in Bishop for the suspenseful Blood on Their Hands. Three high school friends, Garret, Trip and Kyle, break into the local Smart Mart to steal beer and junk food. When the owners, brothers Rafael and Troy, show up unexpectedly, juvenile hijinks turn into a deadly game of cat and mouse. Garret's dad Hank Sutherland is the new Sheriff (he was a well-meaning deputy in White Hot Pistol), but he's too preoccupied with spying on his cheating wife to be much help. Garret decides to turn the tables on his attackers, but things spin out of control for the Sutherland family.

Bishop is Beetner country. When Eric's not prowling its dangerous streets he (along with Steve Lauden) is promoting other writers via the Writer Types podcast, as well as the LA chapter of Noir at the Bar. Eric also designs book covers. Did I mention he edits TV shows too?  I felt guilty for drawing Eric away from his many endeavors to answer a few questions, but he happily obliged. 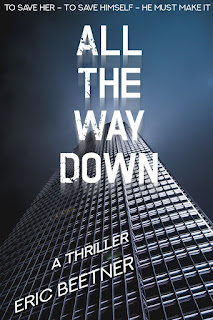 Lawrence Maddox: Your last novel All the Way Down is a tale of big city crime, while Bishop in Dark Duet is "a speck on a map." How does setting dictate what kind of story you write?

Eric Beetner: I tend to write more about fictional places than real ones. I don't like to be bogged down by getting all the specifics right or deal with the readers who will tell you when you got it wrong, even if it was in service of the story. So I make up places or set stories in totally unnamed places, like in All the Way Down.

Now rural or urban I don't differentiate much between. It does dictate the characters in the story and the characters set the tone. Different people live in a small midwestern town versus a big city. You don't need to look any further than our increasingly divided country to see the stark difference. So I think setting will set the tone for who populates the book you're willing to write and everything else flows from there.

LM: I love Bill Crider's quote about you, saying that if you were writing in the '50s you "could've had a nice career writing for Gold Medal or Dell First Editiion." I remember spotting you buying paperbacks at Glendale's Vintage Paperback Collector's Show a few years back. Are you influenced by the prolific paperback crime and adventure novelists of the '50s through the '80s? 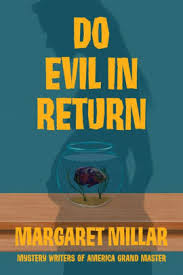 EB: That quote from Bill is my favorite, and man, I miss him. But yes, I try to read a fair amount of classic or vintage books each year. I don't love everything, just as I don't love everything contemporary I read, but I've found some of my absolute favorite books in vintage reads. Some of those writers were so inventive. Look at a writer like Lionel White and you see such a diversity in his plot lines and every one of them works. I've never read a book of his I haven't really loved. Same with Charles Williams. If your a fan of crime fiction I think Hell Hath No Fury (later renamed Hot Spot after the movie) is a must-read. Then he wrote a bunch about his passion for boats and came out with stone classics Dead Calm, Aground, and Scorpion Reef.

Too many people only know the run-of-the-mill detective novels from the past and series like Perry Mason or The Saint, which aren't that inventive and not that different from contemporary mysteries. But if you think writers in the '40s and the '50s didn't do edgy hardboiled you clearly haven't read something like Fool's Gold by Delores Hutchins, or Do Evil in Return by Margaret Millar.

LM: Chris Rhatigan recently wrote a piece about your ability to create great action sequences. I find your action very cinematic. Do movies influence the way you think about writing? 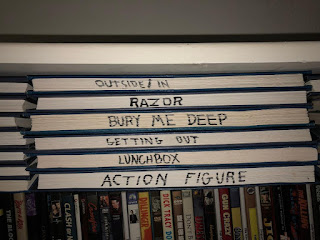 I was so flattered when Chris chose one of my scenes for that piece. Movies are the basis for my writing DNA. I never set out to write novels. I wrote screenplays for years and went to film school, work in the biz, all that stuff that feeds how my brain is hardwired to a cinematic story sense. It's why I tend to write shorter novels, why I tend to read shorter novels too.

We've all seen stories told in two hours or under that are fully realized and resonant stories that stuck with people for years and in many ways change their lives. Movies have shown that a story can be efficient and tight and still have a deep impact. I try to bring that to my novels. And if you're writing action your job as a novelist is to get the reader to see it in their heads. That's a movie! All you're doing is writing it with enough detail and clear, easy to follow action that the reader can play director.

And get out of here with that tired old "the book was better" crap. They're different. And frankly if you love a book I don't know why you'd go see the movie anyway. You already know the story and you know it all can't be in there. So let's let that old trope die out, can we?

Since you and I are both editors we know how important clarity and good geography are. Knowing who is where and who is talking and not interrupting the flow by writing a line or leaving out a detail that trips up the reader even for a second or the spell is broken. It's why what we do is such a valuable skill for writing. We're all about maintaining pace and knowing when to speed up or slow down, when to inject some humor to diffuse tension. We know how to work the difference between shock and suspense.

All those skills I use in my day job I find incredibly useful when I'm writing, and especially in action scenes. And with editing, I think one really valuable lesson is that sometimes the best way to fix a problem with a scene is to eliminate something. A little judicious trimming can work wonders.

LM: As a fellow TV editor I can attest to the long hours and the mental drain that can be a part of the gig. How have you made it compatible with writing?

EB: People often ask me how I can be so prolific with a full-time job and two kids and the podcast, and, and...

It's true that our job uses so much of the same parts of the brain that it's not like we're on the assembly line all day and waiting to get home and use our right brain when we write.  We're draining those batteries all day long. It does impact the way I write. When I sit down I have about an hour to 90 minutes in me. I usually start around 11 at night. So there's also physical fatigue in there as well.

But you make yourself do it. It's like an athlete at that point. You gotta get in the gym, no excuses. But I've found that even when I have time off and can write during the day and get to pretend what it would be like if I were a full-time writer, I can go about 60-90 minutes and then I'm drained. I can get up, walk away for a few hours and come back and do it again and then again at night and get a ton written in a day, but I marvel at those people who say they sit for 5-6 hours at a stretch. I couldn't do that. Part of me also doubts if they're really writing that whole time.

LM: What's next for Eric Beetner?

EB: I have another novel, Two in The Head, out next January and it's a wild one. Very different. Very Hollywood ready, if anyone is out there taking pitches. I also have a novella in the Grifter's Song series that will be out next year and a novella in the Guns & Tacos also out in 2020. A few short stories in anthologies. Beyond that I might lay low for awhile. I'm on the hunt for a new agent (call me!) and looking to see what I can do to switch thing sup since I've been poised for a breakout for years now and it hasn't happened yet.

It's hard to talk about the set backs in a writing career without seeming like you're complaining, but it has been a rough few years of one step forward, two steps back. There have been incredible artistically satisfying moments for me and I've been proud of all the work I've done, but facts are facts and I just don't sell very many books. So I'm working on what that next step is because if I hear one more time I'm "on the verge" or that this "next one is the breakout" or if I end up on another list of "best writers you've never heard of" I'll drive off a cliff.

All that said, I have about a dozen ideas fleshed out and outlined that I want to write. I've written three TV pilots I'd love to get into some hands. I'll continue to do the podcast, Writer Types. I'm sure my version of slowing down will seem odd to others.

Care to catch the last Greyhound to Bishop? Book your one way ticket at www.EricBeetner.com.

I'm Lawrence Maddox and my latest novella is Fast Bang Booze. My Name is Earl creator Greg Garcia liked Fast Bang Booze's "incredible attention to detail and humor." Our resident Sleuthsayer Paul Marks called Fast Bang Booze "a noir fever dream that shoots out of the station like a bullet."  Publishers Weekly said "Fans of offbeat noir will have fun." I'm currently working on the sequel. Available from Shogun Honey.

I thought Once Upon a Time in Hollywood was great, maybe Tarantino's best.  Care to discuss? Find me on Twitter, LawrenceMaddox@madxbooks; Facebook.com/lmaddox; or drop me a line at lawrencemddx@yahoo.com.
Posted by Lawrence Maddox at 00:00