Smoke Gets In Your Line-Up 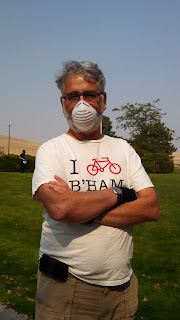 Earlier this week I needed to do some business at a government office and I knew there would be a wait, so I got there fifteen minutes before they opened.  Naturally other people had the same idea, so there was already a line.

Directly ahead of me was a man of about thirty, with several neck tattoos.  In front of him was a gray-haired man in his sixties, wearing a rather dapper soft hat.  Both of them were smoking.

Now, I have asked people not to smoke on more than one occasion, but it never even occurred to me that day.  I could smell whiffs of the burning tobacco but it was a pleasant and breezy morning and the smoke was no problem for me at all.

What really had my attention was the conversation between the two men.  They were discussing their alma maters, by which I mean the prisons they had attended. Tattoo had recently been a guest of the taxpayers of our fair state, while the older gent had involuntarily spent some time in Texas.

While they conversed the line extended behind me and--

He was a preppy-looking guy, in his thirties, perhaps five people behind me in the queue.

He was glaring at the two ex-cons.  "Would you mind stepping out of line if you're going to smoke?  Some of us are non-smokers."

Tattoo immediately stepped away from the crowd.  Because the line bent at the edge of the parking lot this actually put him closer to the man who had complained, but at least he had tried.

The dapper gent stood his ground, literally and figuratively.  "I'm not in the building," he said, mildly.  "Smokers have rights too."

"No one's saying you shouldn't smoke," said Preppy.  "But the law says you're supposed to be twenty-five feet away from the building.  We'll hold your place."

"I'm twenty-five feet from you."  Which wasn't true.

Then the doors opened and everyone's attention turned to the slow shuffle to the security desk where our bags were inspected before we were allowed to await our turn at a service window.

I couldn't help wondering: If Preppy had heard the subject of their conversation, would he still have confronted the men about their cigarettes?
Posted by Robert Lopresti at 00:00