I attended high school so long ago that my class used Roman Numerals. My ninth-grade English teacher was the sister of Pulitzer-Prize-winning poet Theodore Roethke, and she was one of the best--and toughest--teachers I ever had. Because of her, I finished what was then called Junior High School with a better understanding of grammar than any healthy person should have to admit. I earned a "B" from her and was put into the honors English classes in high school because nobody else had earned a "B" from her since the Korean Conflict.

The honors classes all took a diagnostic grammar and usage test the first day, we all scored 177 of a possible 177, and the teacher called that our grammar for the year. We read lots of books, of course, and we did lots of writing, which was graded on our grammar, spelling, punctuation and general usage.

My senior class demanded a research paper of 1000 words, and we had to put footnotes at the bottom of the page and include a bibliography. The teacher promised us she would check our form carefully. I don't remember now whether we had six weeks to complete the assignment, or maybe even eight.

Six weeks, maybe eight, to complete a 1000-word essay. It works out to about 170 words a week, roughly 25 words a day. And we were graded on "correctness," with not a word about style or creativity. I don't remember anything changing in English classes until the 1980s.

In the mid 80s, I found several books that changed my teaching landscape. Peter Elbow's Writing Without Teachers brought the free-writing idea to daylight. Rico's Writing the Natural Way gave students stylistic models to emulate. Klauser's Writing on Both Sides of the Brain amplified both Elbow and Rico. Adams's The Care and Feeding of Ideas and Csikszentmihalyi's Flow: The Psychology of Optimal Experience set up the ground rules for how this stuff all worked.

Nobody else in my school seemed to notice these books, but they actually taught writing the way writers write: Say something, THEN worry about saying it more effectively or even "correctly."
Clarity and voice came first. For decades, we'd been trying to teach kids to say it right the first time, when we know that doesn't really happen.

Most of the English teachers I know are poor writers because they know grammar and punctuation so well that it gets in their way. When I retired from teaching, it took me about three years to accept that sometimes a sentence fragment works better than being correct.

One of the popular in-jokes was a facsimile lesson plan about teaching children how to walk. It buried the topic in medical jargon and psycho-babble and evaluation buzzwords until it became incoherent and impenetrable. The point was that if we taught kids basic life skills the way we taught them lessons in school, the human race would have died out long ago. (I'm carefully avoiding any mention of sex education here, maybe the only class that should be a performance-based subject...)

Back when I was in high school, golfers Jack Nicklaus and Arnold Palmer both said that when they were learning the game, they were encouraged to hit the ball hard and concentrate on distance. They learned control and finesse later, and their records prove that it was the best way to learn.

That's how it should be with writing. Until you produce enough words to say something, don't worry about spelling or grammar.

Today, I expect to write 1000 words in an hour or so. My personal record for one day, back on an electric typewriter in 1981, is 42 pages, or about 10,000 words. I only had three weeks between the end of a summer grad school class and the beginning of my teaching year, so I just got stuff down on paper to fix later. The book was terrible and I later scrapped it, but that was ten times as many words as I'd done years before in eight weeks.

My second high, done to finish the first draft of a novel before I entered the hospital for surgery, was 7000 words.

If you're a writer, this probably doesn't shock you. I know many writers who set a 2000-word-a-day goal. If we'd asked that of kids in my generation, they would have all joined the Foreign Legion. That's because we were attacking the project from the wrong side. It's like pumping in the water before you dig the swimming pool.

Maybe this is why so many people say they don't write because they can't find a good idea. They may have perfectly good ideas, but they're afraid to begin because they fear doing it "wrong." It's the age old false equivalency over priorities: is it a candy mint or a breath mint?

If you think of your story, even in general terms with very little worked out yet, and start typing, the ideas will come. You may have to do lots of revision, but that's easy when you have material to work with. You can't fix what isn't there. The only document I get right the first time is a check because all I have to do is fill in the blanks. I take three drafts for the average grocery list.

Writing CAN be taught, but we have to teach the right stuff in the right order. It's no good obsessing abut correctness until you have something to "correct." We teach all the skills and have all the standards, but they're in the wrong sequence.

Don't raise the bar, bend it.

Teach kids the fun parts faster. I still remember teachers reading us stories in elementary school or the excitement of sharing our adventures in show-and-tell. Maybe if we kept the story first and worried about the finesse later, kids would grow into adults with more and better stories to share in the first place.

THEN you worry about style. There are dozens of books on grammar and usage--I've mentioned several of them before--but there are only two books I can mention about style, and Strunk and White is only really good for expository essays and academic subjects. 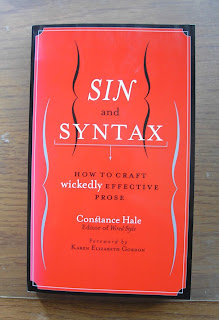 The other would be a required text in any class I taught. If you haven't read this, find a copy. I'm not going to discuss it because that could be another blog all by itself.

When I see kids reading on their screens or tablets instead of books, and watch them text with their thumbs, I have a few seconds of concern. But then I see how quickly they can type and the worry goes away. If they can produce communication that quickly, they can produce many short works quickly to make a longer one, and they can connect with each other. The phone abbreviations and emojis solve many of the concerns we obsessed over, too, like spelling, punctuation, and grammar.
Posted by Steve Liskow at 00:01

Steve, your article triggered a deluge of disconnect thoughts, some so tangentially related I'm almost ashamed to bring them up. Don't throw up your hands in disgust and think I wasn't listening! But I was and I agree.

➊ Japan has seen a spate of 'cell phone novels', mostly teen romances written on cell phones for a cell phone market. Punctuation is minimal as are plots, but at least they were reading.

➋ For grocery shopping and numerous other uses, check out a free app from Google called Keep. Not only can you organize stick-em-like notes (with or without indented bullet points), but your honey can add or subtract from your list remotely and on the fly. Did I mention Keep is free and for Android, iPhone, iPad, and your nearest computer?

➌ I cannot imagine this happening today, but my small-town school in Indiana taught sensible sex education starting about the 5th grade. Classes were paired as topics grew more explicit: 5th+6th, 7th+8th, 9th+10th, and 11th+12th. Male teachers taught girls and female teachers taught boys. (Gasp! The horror! Grab the smelling salts! The modern hysteria of a (choke) *man* teaching sex to girls!) The school's idea was to make kids comfortable talking about sex with the opposite sex. Imagine my surprise and consternation when I arrived in supposedly enlightened, liberal NYC where I found sex education was not only unheard of, but things like selling condoms was an arrestable criminal offense.

➍ Your sentence diagram that led off your article triggered another detour. As a kid, I found diagramming rottenly problematical, sorta making sense at times but frustrating as hell. Along my route to becoming a computer bits-and-bytes expert, I took a lot of interest in the wide diversity of computer languages. I mentioned not long ago both computers and natural languages can be formed and manipulated according to De Morgan’s laws.

In understanding Perl, Python, C, Algol, Cobol, Snobol, or Fortran, computers effectively diagram statements. The differences is they map to binary trees. I realized the technique could be applied to English. Suddenly diagramming made a lot more sense. (Sorry I can't illustrate it here.)

Excited, I pointed this out to the nearest linguist, my cousin, PhD, a nationally recognized expert. She dismissed with a sniff (more of a snort, really) my argument to switch diagramming to binary trees. I paraphrase: "Real diagramming has been done the 'right' way for 300 years, so no need to change now."

Come to think of it, Steve, I really was paying attention to your article.

As I've always known – I do not know all the secrets of grammar nor all the secret handshakes of composition. No matter how much I learned about dipthongs and similes there was always something I didn't know. i before e, except after c – all right, all right. Farther means distances between objects. Further refers to figurative distances. Subject. Predicate. It's. Its. Syllogisms. A lot of fun. A lot of work. Easier to memorize the order of Napoleonic battles from Toulon to Waterloo.

Great post—agree almost completely here—but have to admit I do very much love diagramming sentences.....

I don't recall ever diagramming a sentence.

Leigh, I love that Indiana was so progressive on sex education so long ago. Obviously, pre-Pence!

I never really did much sentence diagramming. Miss (not Ms. back then) Roethke didn't do much with it, so we didn't worry about it later. I've always found it vaguely amusing, but not enlightening. It was more useful than Transformational grammer, though. Does anyone else here even remember that? It was a linguistic aberration that seems to have been popular for a few days in the late sixties. I had to learn it in a class in my secondary ed major, and everyone in the class thought it was a complete and utter waste of time. As it turned out, we were right.