You Can't Make This Stuff Up

Let's start off with the case of Stephen Jennings of Oklahoma, who (along with passenger Rachel Rivera) was arrested after a traffic stop by Oklahoma police and was found to be driving a stolen car, on a suspended license, with a unlicensed handgun, a live rattlesnake, a canister of powdered radioactive yellow uranium, and an open bottle of Kentucky Deluxe whiskey.  Oh, the questions we could ask!  Was he on his way to make the world's first nuclear rattler?  Was the rattlesnake getting his fair share of the whiskey?  Will some brilliant lawyer claim that the whole adventure was the rattlesnake's idea?  That the rattlesnake provided the uranium?  As The Week implied, have the Coen brothers been out-Coened?  (Oklahoma's News)

Meanwhile, there's the guy who took out a full page ad in USA Today on 7/25/19, with the solution to the Great Climate Change Hoax, which involves the law of force, the moon and a $20 billion check.  They must have some money - a full page ad doesn't come cheap - but what they heck, you have to spend money to make money.  Don't believe me?  Read 'em and weep: 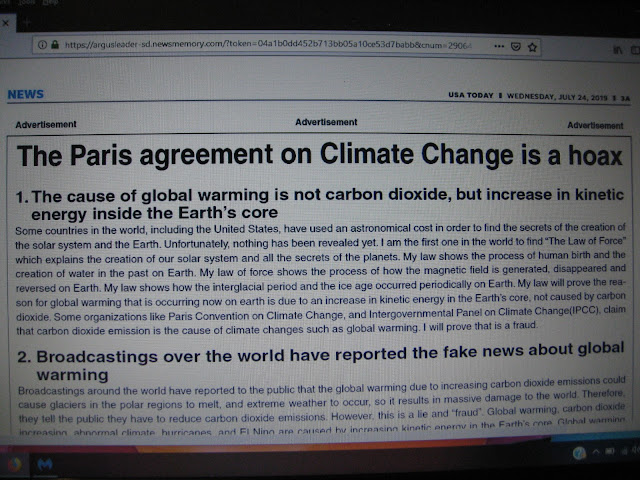 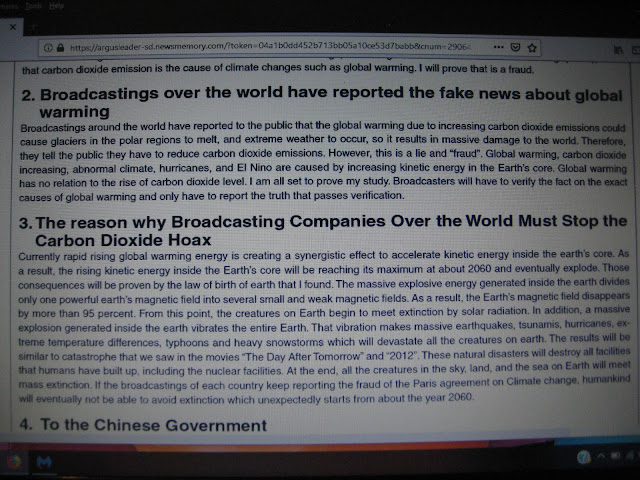 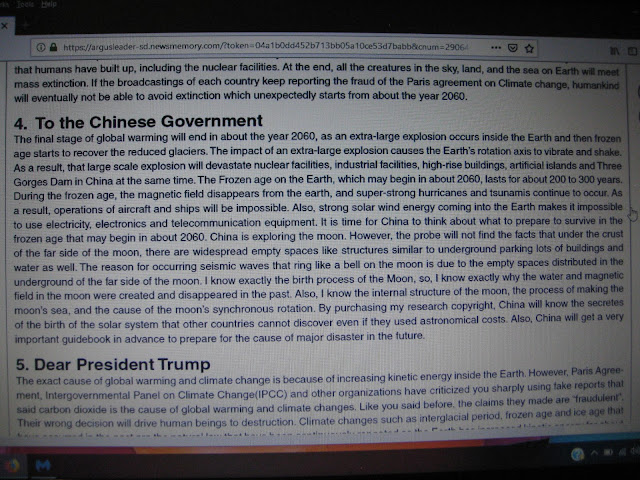 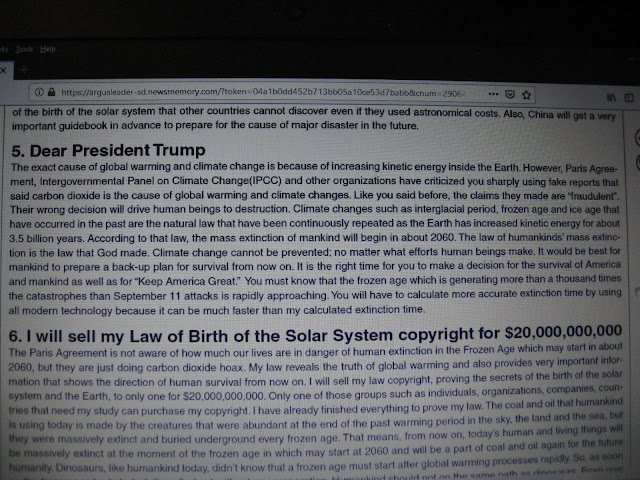 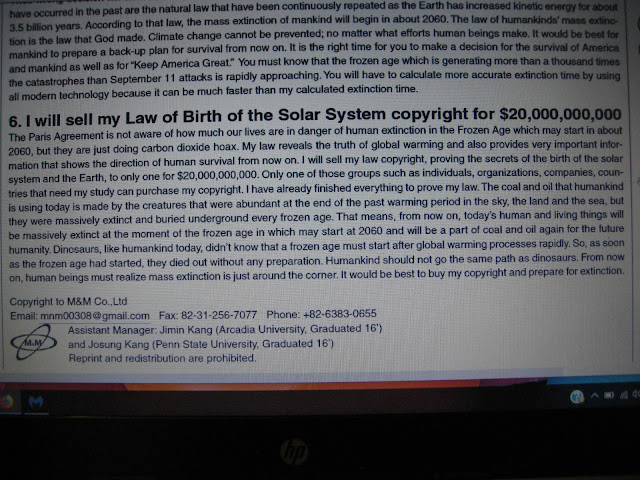 If anyone one out there is brave enough to actually tackle the e-mail, phone number, M&M Co., Ltd. (my bet is that they're NOT the candy makers), let me know what's there.

Now I've seen crazy full-page ads before, mostly because in small towns, a full-page ad in the local newspaper can come pretty cheap.  (NOTE:  Free speech is not always free, but it can always be made more inexpensive.)  This allows a wide range of alternative realities to be presented to us, the reading public, and up here in South Dakota, I've read some pretty strange stuff.  My favorites are the Sovereign Citizen sales pitches calling for everyone to sign up for their Government ID card which allows you to ignore the laws of the false United States with impunity.  BTW, these are actually fairly pricey, especially since no one shows up to help out at the [inevitable] trial after they're used.  But I've never seen an ad that asks for $20 Billion flat out with an apparent expectation that someone will cough it up.

On a lesser note, a guy in Longmont, CO, decided to fix his missing tail light with a red sports drink.  (Source)

Apparently we just aren't killing enough wildlife, fast enough, in the United States.  But God knows we tried up here in South Dakota, thanks to Governor Noem's own personal initiative, the Predator Bounty Program, which allowed state residents to go out and kill all those animals which might be eating pheasant eggs or otherwise disrupting the great Pheasant Hunting Season which God knows is a huge money-maker up here.  And get paid for it at $10.00 a tail!

Did I mention that our South Dakota pheasants are Chinese ring-necked pheasants, which are not native to South Dakota?

Anyway, to preserve these Chinese immigrants from natural predators, the Governor decreed that certain nest predators (i.e., they eat eggs) must be destroyed: raccoons, striped skunks, badgers, opossums, and red fox, all of which are native to South Dakota. The bounty season was from April 1-August 12, 2019.

Did I mention that opossums eat 5,000 ticks a day, and are a major soldier in the battle against spreading Lyme disease?

Anyway, to prove that someone had killed them, and not just picked up road kill, they had to bring in the tails, and including bone, etc.  (The directions were grisly.)  And the animals had to be "harvested" with a trap.  (Speaking of traps, they were built by the inmates at the South Dakota State Penitentiary, labor costs 25 cents an hour, which is why the State could give away the traps for free.)

The really grisly part, to many of us, is how the capturing of an animal in a trap, killing it in cold blood, and then sawing off its tail, was been presented as good old fashioned family fun. While I am not going to post the pictures of Governor Noem's children -  one with a terrified live raccoon in a trap, and then one with the same, now-dead raccoon on top of it - you can find them posted proudly on her official Governor Kristi Noem Facebook site, April 6, 2019 with the following blurb:

Apparently Governor Noem hasn't heard about the studies that have shown that kids who torture and kill small animals are prone to... unpleasant behavior... later on in life.

Thankfully, the Program closed on Monday, August 12th, "after receiving 50,000 nest predator tails from nearly 3,000 participants.  The bulk of submissions came from raccoon tails at 37,720 followed by the submission of 5,529 skunk tails."  (KotaTV)  This means the State of South Dakota paid out $500,000.  That's a lot of money for something that most environmentalists, scientists, and even members of the Game, Fish & Parks don't think is going to do anything but increase the wild rodent population.  And wild rodents eat eggs, too.

Here is our Picture of the week, your Moment of Zen: 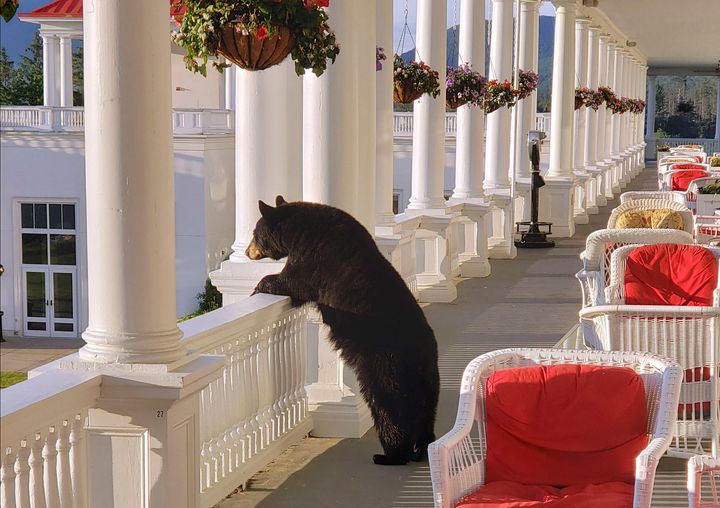 Bear watching sunrise from hotel in New Hampshire.  Who knew they had that kind of vacation money?  (White Mountains)

Meanwhile, I'm recovering steadily from my hernia surgery, and I will spare everyone the grotty details of what hurt where, when, how, etc.  I will only say that, because I had a laprascopic/robotic procedure done, I look as if someone took a very large three-tined fork and stuck it in my stomach to see if I was done.  I had a great surgeon.  A great home care nurse in my husband, Allan.  And I cleared my calendar of everything for 2 weeks.  Life is pretty sweet sometimes.  Especially when you have Medicare!  Huzzah!