Robert Johnson and the Hell Hound


by Steve Liskow
Last Friday, August 16, was the 42nd anniversary of Elvis Presley's death. It was also the 81st anniversary of the death of an even more important music figure. On the same date in 1938, Robert Johnson, often called the King of the Delta Blues, died after drinking a bottle of poisoned whiskey. The story could become a great true-crime book if I had the bent for the massive research necessary, but I don't. Johnson's saga has already fueled works in various genres anyway.

Born May 8, 1911, Johnson was the guitar hero around the Mississippi Delta, standing on a pinnacle with Charley Patton, Son House, and nobody else. He only recorded 29 songs over the course of two sessions, one in a San Antonio hotel room in November 1936 (22 tracks in two days) and a Dallas hotel room over a weekend the following June (20 more tracks). The recording logs say 17 more tracks were recorded, but nobody knows what happened to them. We have 42 surviving tracks, one or two takes of 29 iconic blues songs.

Columbia released a vinyl LP of 15 songs in 1961, and among the musicians who heard Johnson for the first time were Eric Clapton,
Keith Richards, Jimmy Page,
Brian Jones, and Mike Bloomfield.
That spark fanned the flame of the American blues revival and the British Invasion. An LP of the remaining songs appeared in 1970 and stoked the earlier frenzy. There have been three remastered CD sets of Johnson's work. The last two went platinum, the latter in less than a week.

What did Johnson give us? Well, Eric Clapton played "Ramblin' on my Mind" with John Mayall's Bluesbreakers after he left the Yardbirds. He still considers "Cross Road Blues" his trademark song since he recorded it live with Cream in 1968. That trio also covered "From Four Until Late." Elmore James had a 1951 hit with his slide version of "I Believe I'll Dust My Broom." Delaney and Bonnie and Johnnie Winter each recorded "Come on in My Kitchen." Led Zeppelin played "Traveling Riverside Blues" in their live sets. I first heard "Walkin' Blues" on a Paul Butterfield album (Mike Bloomfield played guitar), and the Grateful Dead often played it live. The Rolling Stones did a killer version of "Love in Vain," mostly when Mick Taylor was their slide maestro. The Charlatans covered "32-20" on an early LP, and I can't begin to count the artists who have performed "Sweet Home Chicago."

That's a pretty good showing for a man who died three months after turning 27.

We have only two existing photographs of Robert Johnson, and they both show him holding a guitar in his amazingly long fingers, which may account for his virtuosity. 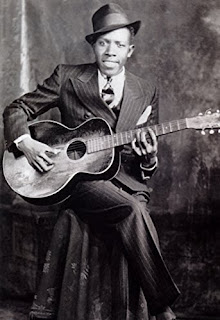 Along with that skill, sometimes attributed to his selling his soul to the Devil at a crossroads, Johnson earned a reputation as a lover of both whiskey and women, not always single. He carried on publicly with ladies who wore another man's ring, and it caught up with him in July of 1937.

He and Dave "Honeyboy" Edwards were performing at the Three Forks Store & Jook House when someone sent up a bottle of scotch for Robert. Edwards noticed that the seal was broken and knocked it out of his friend's hand with the warning "Don't never take a drink when the seal's broke."

Johnson didn't listen. Another bottle appeared shortly and he drank heavily while playing. By late in the evening, he was very ill and showed symptoms of what was probably arsenic poisoning. He was making time with the wife of the man who owned the roadhouse, and since rats were around, so was poison. Johnson suffered for several days and contracted pneumonia, passing away on August 16.

This was in Greenwood, Mississippi. the local white sheriff didn't give two hoots about some dead colored singer, and while there were many witnesses and people who knew the situation, nobody ever followed up. Johnson's death certificate doesn't even give a cause of death.

Months later, John Hammond wanted Johnson to play at his Spirituals to Swing concert (Dedicated to Bessie Smith, who had also died recently) at Carnegie Hall. He sent Don Law, who supervised Johnson's recording sessions, to find him. Law eventually learned of Johnson's death, but found another musician to take Johnson's slot in the show and revive his own flagging career: Big Bill Broonzy.

Johnson's playing was the stuff of legend, and his life and songs have inspired novels, plays and films. Elijah Wald explores Johnson and the Delta blues in Escaping the Delta, which points out that blues wasn't even recognized as a separate genre until the 1930s.

David Sheffield's "Love in Vain" is a short story told from the point of view of the coroner examining the body of a dead blues singer. I first found it in an anthology called, fittingly, Delta Blues.

Sherman Alexie's early novel Reservation Blues is a whimsical tale of a man who picks up a black hitchhiker in Idaho and finds a guitar in his back seat after dropping the guy off. Johnson was the hitchhiker who faked his death to cheat the devil out of his soul. He leaves the guitar behind so he can't be tracked, but the magic instrument enables a group of Indians to form a rock band. I assigned the book as a summer reading text one year and encouraged the students to track down Johnson's recordings. It turned out there were two guitarists in the class. Those young men will never be the same.

Thunder Knocking on the Door, a play by Keith Glover, premiered at Yale Rep in the 1990s with Johnson's music front and center. The script is good and the acting was fine, but the loudest applause went to the blues band that made the songs come to life.

Then there's the forgettable film Crossroads. The premise is that an old black harp player knew Johnson and learned a thirtieth song from him that he never recorded. The script and acting don't do it justice. The best part of the film, no surprise, is the soundtrack, created and performed by Ry Cooder and a host of surviving blues legends including Blind Sonny Terry on harp. Cooder and Albert King performed the title song live on TV at (I think) the Grammies that year.

My own novel Dark Gonna Catch Me Here takes its title from a line in "Cross Road Blues." The whole line is "Sun goin' down, dark goin' catch me here/ I ain't got no woman to love and feel my care." When I heard the line for the first time, my reaction was, "What a great image!" Then I thought it could be a title. My cover designer loved it too, and started working before I even wrote the book. He said, "You better go darker than usual, because I am."

I did. By now, the book has probably sold dozens of copies. 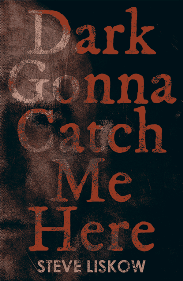 Johnson has been dead three times longer than he lived, and he's still fertile ground for musicians. The songs are haunting and evocative and push guitarists to try the impossible. And his archetypal existence and lifestyle continue to inspire legends and stories. Someday, maybe someone will write the work that does him justice.