His last book, American Pain: How a Young Felon and His Ring of Doctors Unleashed America’s Deadliest Drug Epidemic, was named a New York Post “Favorite Book of 2015” and was a 2016 Edgar Award nominee. American Pain documented how two young felons built the largest pill mill in the United States and also traced the roots of the opioid epidemic. John has spoken widely about the opioid epidemic to audiences that include addiction counselors, medical professionals, lawyers, and law enforcement.

John also wrote The Last Lawyer: The Fight to Save Death Row Inmates (2009) and Deadhouse: Life in a Coroner’s Office (2005). The Last Lawyer won the Scribes Book Award from the American Society of Legal Writers. More information about John’s books can be found at www.JohnTempleBooks.com.

John Temple is a tenured full professor at West Virginia University’s Reed College of Media, where he teaches journalism. He studied creative nonfiction writing at the University of Pittsburgh, where he earned an M.F.A. John worked in the newspaper business for six years. He was the health/education reporter for the Pittsburgh Tribune-Review, a general assignment reporter for the News & Record in Greensboro, N.C., and a government and politics reporter for the Tampa Tribune in Tampa, FL. I've had the pleasure of knowing him for more than twenty years, since attending law school with his wife. I'm so pleased to let you all meet and learn from such a great journalist and storyteller.


In 2006, I read a book that changed the trajectory of my writing life. I was beginning work on my second nonfiction book, about a North Carolina lawyer who defended death row inmates, when a screenwriter friend recommended I read Syd Field’s 1979 book, Screenplay, which is a sort of holy text for Hollywood screenwriters.


I wasn’t a screenwriter, but I soon realized why the book had such an impact. Somehow, even after many years of working as a newspaper reporter, devouring numerous writing books, and earning an MFA in creative nonfiction, I had never come across such solid, practical advice about how stories are built. Among other ideas, Field advocated a fairly strict three-act structure as the screenplay ideal, but for me the single most helpful concept in his book involved “beats.”


Most screenwriters agree that their chief mission is to find the story’s moments of change, which they call beats. In a screenplay, where efficiency is key, those transformative moments determine whether a scene or sequence earns its pages. In every scene, something must occur that alters either the character’s mindset or the stakes or the dramatic action. In my last three books, all nonfiction crime stories, I’ve tried to consciously seek out the moments of change that my various characters have experienced, and let those beats dictate how I structured the books. I’m looking for the events that contain catalytic moments that alter the protagonist or the surroundings and further the story. Those are the moments I seek to present as full-fledged scenes, rich with vivid detail. The rest is summary.


Sometimes, a beat can be dramatic and external. As Raymond Chandler wrote: “When in doubt, have a man come through a door with a gun in his hand.” (What Chandler actually meant by that quote is somewhat more complicated.) However, the most intriguing and pivotal beats often involve internal change, which is often a decision or realization. In my 2015 book, American Pain, which chronicled the rise and fall of the nation’s largest painkiller pill mill, the owner realized how much money he stood to make if he could avoid the Drug Enforcement Administration’s scrutiny. That meant he needed to clamp down on his doctors and staff. This was a key moment of change for this primary character. So instead of breezing through that section of the book in an expository way, I meticulously looked for moments and details that would illuminate that beat. There were many other moments of obvious drama in the book – train crashes, overdoses, a kidnapping, drug busts – but that change in the character’s outlook felt more important to the overall story. 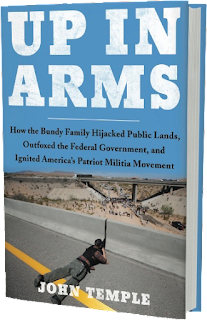 Another type of internal change is a shift in the character’s emotional state. If a character enters and exits a scene in emotional stasis, then the scene may be lacking in movement. My new book, Up in Arms, chronicles the Cliven Bundy family’s multiple standoffs with the federal government. I deliberately sought to find scenes that showed Ammon Bundy’s increasing mistrust and suspicion of the feds, which eventually led to his engineering of an armed takeover of a wildlife refuge in Oregon.


External change is any change in the character’s environment, usually resulting in what Aristotle termed “peripeteia” or “reversal,” a sort of flip-flopping of the pressures being exerted against the protagonist. At the beginning of a scene, the character may be under one kind of stress, but by the end of the scene, a new pressure, often a polar opposite, has arisen. A third type of change is the shift in the relationship between two characters. Like any change, a relational change can be subtle or obvious. As veteran screenwriter Aaron Sorkin said in a 2000 interview: “Any time you get two people in a room who disagree about anything, there is a scene to be written. That’s what I look for.”


So every scene or sequence must contain a beat of change. How should these beats be arranged? Screenwriters are continually puzzling over this question. In The Writer’s Journey: Mythic Structure for Storytellers & Screenwriters, Christopher Vogler repackaged the work of mythologist Joseph Campbell for modern Hollywood, outlining 12 major beats that are part of what he called the Hero’s Journey, including a Call to Adventure, Crossing the Threshold, and the Return with the Elixir. The specifics of these beats are endlessly variable, adaptable to any genre or character.


Robert McKee’s book, Story, suggests that narratives feature a warring Idea and Counter-Idea, illustrated by beats in which one or the other gains the upper hand. Scenes and sequences should be arranged so the Idea prevails in one beat, only to be defeated by the Counter-Idea in the next, and so on in an undulating wave of positive and negative beats. McKee writes: “At climax one of these two voices wins and becomes the story’s Controlling Idea.”


All narrative writers know change must occur to keep a story moving. But novelists and creative nonfiction authors may benefit by using the concept of story beats to more deliberately analyze the value and possibilities of their scenes and the structure of their books. It’s a concept that’s just as useful on the page as it is on the screen.
Posted by mystery guest at 00:00