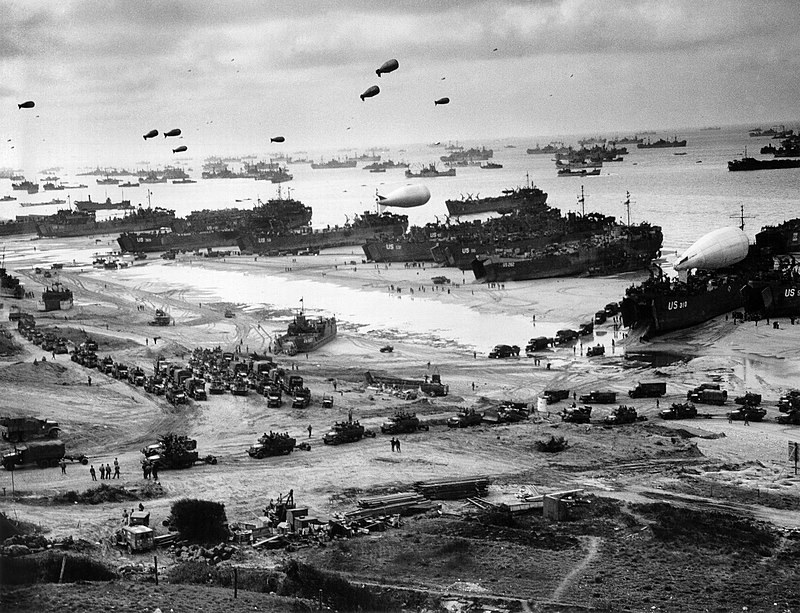 D-Day still remains in the actual physical landscape of Normandy.  And in the memories of the soldiers, the Normandy citizens,  and of course the books and movies that have been made about it.  "The Longest Day", book by Cornelius Ryan, was made into a 3 hour movie (written by Ryan with "additional material" by Romain Gary and James Jones, among others) with a cast including (apparently) every male star they had on the  Hollywood lot.  And some that weren't.


Trivia:  According to the 2001 documentary, "Cleopatra:  The Film That Changed  Hollywood", Richard Burton and Roddy McDowall were sitting around, not having been used for weeks, and bored senseless in Rome (I find the latter hard to believe - Burton always had drinking), but anyway, they phoned Zanuck, the director, begging to for something to do.  So they flew themselves to location and did a day's worth of cameo work for free.  (Wikipedia)

D-Day is also recreated in both "Saving Private Ryan" and "Band of Brothers."

But the most touching movie about D-Day takes place long after the event.  1994's "A Foreign Field" is written by British screenwriter Roy Clarke (who also wrote two of my favorite comedies, the miniseries "Flickers" and the longest running comedy series ever, "Last of the Summer Wine").  It stars Leo McKern as Cyril and Alec Guinness as Amos, two elderly British veterans, John Randolph as Waldo, an old American vet, and Geraldine Chaplain and Edward Hermann as Waldo's daughter and son-in-law.  These five gather for the 1994 D-Day anniversary, where they also look up Jeanne Moreau's Angel, the good-time girl who apparently took care of all the soldiers in 1944.  Let me assure you, even at 65, Moreau makes you believe she was worth remembering - and perhaps still worth fighting over.  Here's the original trailer:

With Lauren Bacall as the mysterious alcoholic who tags along.  BTW, Alec Guiness does a master turn as Amos, permanently brain-damaged by shrapnel at D-Day, who (as one reviewer put it) "brings more meaning to a flip through the channels on a French TV set than most actors find in a Shakespearean soliloquy."   (New York Magazine)  It's funny, it's touching, it's moving, it's full of memory and meaning.  Wonderful.   (It's also available on Netflix on DVD or at Amazon.)

Part of what works in "A Foreign Field" is the relationship between Cyril and Amos.  Which, in turn, is based on the great chemistry of Alec Guinness and Leo McKern.  That relationship also worked in "Monsignor Quixote", which starred Alec Guinness as parish priest Quixote, whose best friend is the Communist ex-mayor of El Toboso.  When Father Quixote is elevated - by a sheer fluke - to Monsignor, things get complicated.  Based on a short novel by Graham Greene (who also worked on the screenplay!) it's, funny, touching, moving, with one of the greatest endings (imho) of any film.  It's available here, on YouTube, in its entirety:


I wish that Guinness and McKern had made more movies together, but then I also wish that Paul Newman and Robert Redford had made a couple of more.  But "Butch Cassidy and the Sundance Kid" and "The Sting" are good enough.  So are "Monsignor Quixote" and "A Foreign Field."

We're going to watch "A Foreign Field" tonight.  It seems the perfect tribute to D-Day, and to all those who fought, and fought, and would not shift.  Watch, and you'll understand.