How Long Does Grief Last?

In a few weeks it will be one year since Carol died. She was my dearest friend since childhood. I hesitate to write about Carol because using words to describe a friendship like ours is like trying to carve a sculpture from water.

We met when we were seven years old and throughout our childhood we wandered our neighbourhood chatting and laughing. During our teens we talked intensely about every dream, every heartbreak and all the new feelings descending on us. As we became adults we discussed university - all our courses, all our insecurities and, eventually, our marriages. She shared her stories of students she taught in her lab and I shared stories of my patients.

When my children were born, she was the first one in the door. She spent countless hours with my children, wandering the woods, reading books and calling every birthday with her lovely rendition of Happy Birthday. My children were almost in their teens before they realized that their beloved Aunty Carol wasn’t related to them.

Over our decades of friendship we never fought. We thought that was odd since we were both intensely passionate people. What we did do was to find the humour in every and all incidents in our lives - no matter how trivial or serious. The closest we came to fighting was when we had spirited discussions about who paid the restaurant tab. We discussed this intensely and decided it was not as serious as a squabble but also more serious than a quibble, so we named these squibbles. We found that so funny and even our restaurant tabs became hilarious.

Once as the tab arrived, I asked Carol if this was going to be another squibble. She said it was going to be an outright squabble. We were grinning ridiculously at each other and the waitress asked - as we were often asked - about our relationship. People were perplexed by this Viking Beauty and WOC with a mass of curls and how we were so impossibly close. Carol, completely deadpan, replied, "Twins." Then, without missing a beat when the waitress looked perplexed, Carol continued. She pointed at me and said, "The lipstick always throws people." I have no idea how funny the politely smiling waitress found this exchange but we chuckled about it all evening.

Over the nine months from her breast cancer diagnosis to her death, I visited, spent as much time as I could at her home. When she had her mastectomy, I was there and stayed for her recovery. We chatted and talked as we always did about everything. When we found out that the breast cancer had spread to her bones, we continued talking about that too. All through that time, we found so many things funny. Including cancer. When she was in hospital I stayed in her room when she was frightened.

Near the end, I had left to go home and her sister called and said she was asking for me. I went immediately and spent the last conscious night of her life with her. She lay there so quietly when I walked into the room that I pulled up a chair and held her hand. She said, “Mary! I would know that tiny hand anywhere.” We hugged. And then she slept. As I watched her sleep, I marvelled how, with her brain full of cancer, she still knew my hand. Still loved me.

Many people have wondered when I’ll stop grieving Carol’s death.

A friend recently sent me an article that looked at a study where “They collected data from 26,515 people over 14 years, and found a range of negative consequences experienced by those who had a close friend die. In the four years after a death, significantly adverse wellbeing was found in people both physically and psychologically.”

This reminded me of a question I asked my supervisor when I started practice. I was trying to understand a patient who appeared to still be in mourning 15 years after the death of his child. I asked  about the length of the normal mourning period. I was young, didn’t have children but that question, quite frankly, was incredibly stupid. My supervisor kindly answered that the normal mourning period for a child was a lifetime.   But what about a friend? Not just any friend, but a friend who forged me, who made me who I am and when there is nothing, nothing at all I have ever done that Carol wasn’t a part of? That kind of friend. My supervisor was a wise and kind man. If he were alive today, I would call and ask. I long for that conversation.

There is something else about Carol and me.   I was never the person I wanted to be. I wanted to be carefree, bold and irrepressibly confident. What I am is hopelessly serious, full of thoughts when I want to just be easy going. Carol was bold enough to climb apple trees without fear as a child and throw a knapsack on her back and head to Europe on her own after high school. She was far more carefree than I could ever be. She was a brilliant research scientist and a talented teacher. Maybe more so because she treated the meticulous and painstaking work of molecular biology like an adventurous journey with pipettes and gene splicing.

But we were also similar.  We both were totally honest, so we talked about our insecurities, our painful embarrassing incidents with ease. We also deeply loved kindness and recoiled from cruelty so we talked endlessly about the treatment of animals, children and people of all ages.

For me to have someone as wonderful as Carol love me so deeply, so loyally
for so long, made me feel better. Somehow less serious. Less hopelessly awkward. 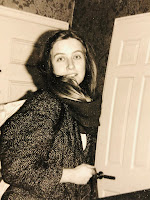 Carol was beautiful. Tall and blond. She was also strong. Until the last few months of her life. This photo of her as a young student leaving the apartment now is so poignant - it is her leaving me.

This year has been tough. My father died. My mother is now ill. I so needed to talk with Carol - these were the first hardships that I haven’t been able to share with her. Also, my daughter won a prestigious award and got a cat. My son went to Australia and published some exciting papers. Carol would have been eager to hear all of this and we would have chatted endlessly - and then she would have called the children for more details.

I miss hearing about the adventures of her life - her story was cut off mid-sentence. I want to know what would have happened if her story went on till we were old and ornery.

This was one of our last texts:

If there was ever a testament to the calibre of Carol, this is it. With cancer in her bones, spreading to her brain, unable to breathe and this, this is what she worried about: not being there for me. Steel in her spine. Pure steel.

This is the story of Carol and me, but each death leaves people with stories cutoff in mid-sentence. While some friends wonder when I'll get over my grief - my longing for Carol - my children and husband don't wonder. They share memories - sometimes we cry, sometimes we laugh - but always we miss her. We expect nothing less.

Since I can’t ask my supervisor, I’m going to call this one.   I will miss Carol for my whole life.   When I die, missing her will be one of the last thoughts I have.
Posted by Mary Fernando at 00:00