by Paul D. Marks
A double header today. First up are some thoughts on the California Crime Writers Conference that happened this past weekend. Next up will be my Father’s Day reading recommendations. And from the truth in advertising department, I posted this (the book list part) previously on another site, so I hope you don’t mind the rerun. The CCWC is held every other year in the L.A. area, Culver City. It’s a joint effort by the LA chapters of Sisters in Crime and MWA. It’s not as big as some other conventions but it makes up in quality what it lacks in quantity. And since time and money for conferences is always finite and this one is local for me it’s one I always try to go to.

There were two guests of honor: Tess Gerritsen and Catriona McPherson. Tess was the keynote speaker for lunch on Saturday. Her speech was short but pithy and to the point. She spoke about something that writer’s rarely talk about: what not to do. Later in the afternoon, Catriona McPherson gave a workshop called “Deep in a Bowl of Porridge” about how to plant clues. 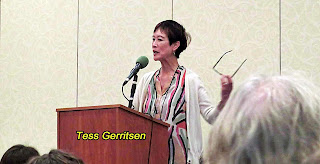 Panels ranged from “Demystifying the Hallmark Mystery” and “Marketing without a Budget” to “Indie Publishing: New Frontiers” and “Adapting Your Novel to the Screen.” There was some emphasis on Hollywood because of the close proximity. 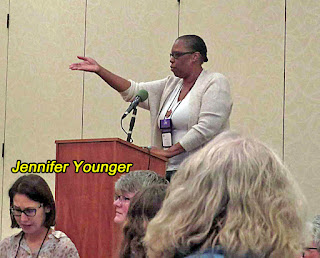 I was on the “Bringing the Past to Life” panel with Anne Louise Bannon, Jennifer Berg, Rosemary Lord, and Bonnie MacBird, and moderated by Amanya (“A.E.”) Wasserman. We discussed writing mysteries set in the past and how we do our research for them. Our panel covered the 1870’s to the 1990’s. 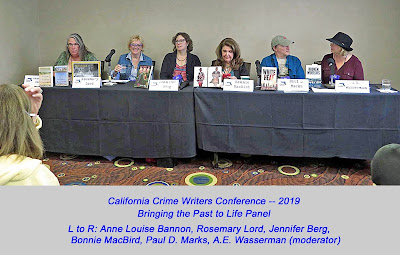 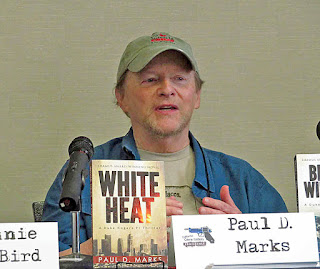 Plus there were workshops on Forensics, Interrogation Techniques, Suicide Bomber Indicators, Compassion Fatigue and Weaponry (although not all at once….).

Audio of the panels are available from www.vwtapes.com and you can see a list of them at https://ccwconference.org/panels/.

But the main reason I go to these things is to “commune” with fellow writers and see people I might not have seen in some time.

It’s such a good conference that Walter Mosely showed up as a regular attendee, not even as a featured guest. And this isn’t the first time.

Unfortunately, I could only be at the conference a limited time this year due to personal reasons. But I enjoyed the time I had there and look forward to the next one. Only two years off. So, if you can swing it when it comes around again in a couple of years you might want to check out this two day conference in LA LA Land.

And some Father’s Day Reading Suggestions:

There’s so damn many good mystery-crime books out there. This list just covers crime novels, some of which I may have mentioned before. And maybe some time I’ll do a list of my five non-crime novels. Anyway, here goes:

The Poet: Michael Connelly is probably best known for the Bosch books. And I’m among Bosch’s fans. But I’d have to say my favorite Connelly book is the stand-alone The Poet (1996), though Jack McEvoy, the main character does appear in other books. The story follows reporter McEvoy as he investigates a string of cop suicides, including his own brother’s and ends up going down a hellish spiral into a world of pedophiles. It also introduces FBI agent Rachel Walling, who shows up in other Connelly novels. The Poet is dark and unsettling, but I think the reason I like it so much is that it is so well plotted, with a lot of twists and turns, and that it really keeps you on edge the whole time. I think this story is for anyone who likes a good crime yarn, but it’s not for the squeamish.

Tapping the Source: These days Kem Nunn is arguably better known as the co-creator of the TV series John from Cincinnati, as well as a writer on Sons of Anarchy and Deadwood. But he’s also the author of, I believe, six novels. Tapping the Source (1984) is his first and is something special. If it’s not the novel that invented the “surf noir” genre it’s certainly an early and foundational entry. This is not the Beach Boys’ version of sun, sand, surf and surfer girls, but a much darker vision of life on SoCal’s storied beaches. Ike Tucker, an aimless young man, treks to Huntington Beach (a.k.a. ‘Surf City’) to find his missing and possibly dead sister. There he gets hooked up with bikers, sex and drugs. No Gidgets or Moondoggie’s here. And Ike will be lucky if he gets out alive. I like this one so much that I looked into acquiring the film rights. Unfortunately they were already taken. Now, if whoever has them these days would just make the damn movie already. Tapping is good for anyone who loves surf, sun and murder.

Down There (a.k.a. Shoot the Piano Player): David Goodis has been called the “poet of the losers” and his stories of people on the skids certainly bear that out. I came to Goodis through the movies, which is how I’ve come to several writers and/or novels. I’m a fan of the Bogie-Bacall movie Dark Passage, so after having seen it a couple of times I decided to check out the David Goodis novel it was based on. I liked it enough that I began to read pretty much anything of Goodis I could get my hands on, but this was before he came into vogue again so mostly I had to pick up very scarred paperbacks (many, though not all of his books were only published in paperback), and I devoured his whole oeuvre. And, though I liked pretty much everything to one degree or another, Down There (1956) really stood out for me. It’s the story of a World War II vet, a former member the elite Merrill’s Marauders who, for a variety of reasons, is down on his luck – way down. Francois Truffaut made the book into a movie called Shoot the Piano Player which, to be honest, I don’t like very much, but that’s why the title of the book was changed from Down There and is probably better known today as Shoot the Piano Player. I think it would be good for fans of classic noir, old movie buffs, and others.

Mallory’s Oracle: NYPD detective Kathy Mallory is a hard-as-nails cop and not just because of her bright red nail polish. Even her creator, Carol O’Connell, describes Mallory as a “sociopath”. Mallory’s Oracle (1994) is the first in the Mallory series and probably the best place to start. I’ve talked with people about Mallory and recommended the Mallory books to several people over the years. And it seems people either love or hate Mallory. I’m in the former category. I love her no-nonsense, doesn’t suffer BS approach to her job. Nothing, including the law, will stand in her way. Not that I’d necessarily like to be friends with her if she suddenly came alive and jumped off the page. I think the Mallory books would be good for someone who likes solid crime stories, strong female characters and doesn’t mind one that’s a sociopath…

Devil in a Blue Dress: Pretty much anyone who knows me knows I have a thing for L.A., past and present. LA history. LA culture. And novels and movies set in the City of the Angels. Walter Mosley’s Devil in a Blue Dress (1990), the first Easy Rawlins novel, hits all those bullet points. And, much as I Iike Easy, I really dig his psychopath friend, Mouse. Not someone you want to get on the wrong side of but certainly someone you’d want to have your back when the you-know-what hits the fan. (I wonder how Mouse and Mallory would hit it off?) Devil in a Blue Dress, and the other Easy novels, would be good for LA history buffs, noir fans, general mystery fans.

The Big Nowhere: James Ellroy’s The Big Nowhere (1988) is the second of his LA Quartet books [ the others are The Black Dahlia (1987), L.A. Confidential (1990) and White Jazz (1992) ]. All are good, but if I had to pick one as a fave it would be The Big Nowhere. To try to describe Ellroy’s fever dream style is an exercise in futility. The story is set in LA in the 50s right after WWII. In part, it follows Sheriff’s deputy Danny Upshaw through the investigation of a series of mutilation crimes and exposes corruption and hypocrisy amid the “red scare”. I used to go to many Ellroy book events and signings and he truly is the Demon Dog of American Crime Fiction. At one event he even had a band with him. He’s a trip. His writing is a trip. His books are a trip. They would be good for anyone who’s into new noir with a retro setting, LA history buffs and the usual suspects.

The Grifters: Jim Thompson’s The Grifters (1963) is a good book and an even better movie. If you like people living on the down low, if you like con artists, and if you like the grift, this is the book for you. It would be good for fans of Jim Thompson (how’s that for stating the obvious?), noir fans, hardboiled mystery readers.

Bonus Round #1: White Heat / Broken Windows / Vortex / L.A. Late @ Night (uh, all by me): Well, since I’m not above a little BSP I couldn’t very well leave out this trio. White Heat is a noir detective thriller set during the Rodney King riots. Broken Windows is the sequel to White Heat and follows P.I. Duke Rogers’ investigation of the death of an illegal immigrant in the turbulent 1990s L.A. Vortex is about a soldier returning from Afghanistan and finding more trouble in L.A. than in the war. LA Late @ Night is a collection of five of my previously published stories. And all four would be good for everyone! Well, anyone who likes hardboiled, noir and detective fiction. 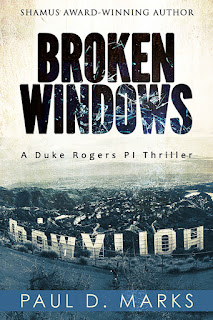 Bonus Round #2: I didn’t mention Raymond Chandler and Ross Macdonald in my list above because to me they’re on a plane by themselves. And, as many of you know, I have a thing for both. I don’t think you could go wrong with any of Chandler’s or books – because he’s just such a damn good writer. And Macdonald blows me away with his explorations into the psychological aspects of crime and stories that boomerang back on the characters – the past always comes back to haunt them. I like pretty much everything by both of them, but if I had to pick I think I’d choose The Long Goodbye (1953) for Chandler and The Chill (1964 – a good year for the Beatles too!) or The Galton Case (1959) for Macdonald. These books would be good for pretty much anyone interested in mysteries and the crime fiction genre, but especially as an intro to a young or new reader of mysteries. And as an introduction to classic mystery and detective fiction. 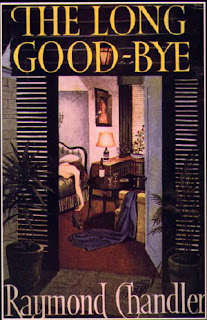 What about you? What books would you recommend as gifts for the people in your life?