by DoolinDalton
by Jim Thomsen and Brian Thornton

My old friend Jim Thomsen and I have had a years-long on-going discussion of crime fiction tropes, crime fiction cliches, and what distinguishes them from each other. Recently our conversation veered in the direction of the time-honored "shoulder wound." The following is excerpted from said conversation. 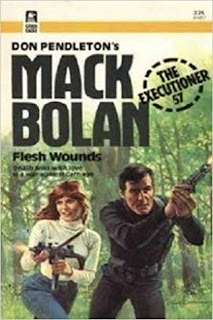 volunteer to be shot in the shoulder so they can know how it feels — and thus write about it more authoritatively and plausibly.

Why wouldn’t any author eagerly queue up for this opportunity? In countless works of crime fiction, the shoulder is depicted as a fluffy, friendly pincushion for bullets, and the shoulder wound is depicted as a nuisance on the scale of a mosquito bite, something that slows down the hero a bit — and wins panty-dropping sympathy from the woman on the fence of his life — before he goes right back to kicking baddie ass.

Shoulder wounds are one of the more prolific and ridiculous clichés in crime fiction — and one of the most pervasive. (An Edgar Award-winning author, one I admire, just released a novel in which a DOG gets shot in the shoulder: “Something hot whizzed through the fur on my shoulder.” Is the siren song of the shoulder wound that irresistible?

Think about it. What percentage of the human body is made up of our two shoulders? My guess is that it’s a single-digit figure. Yet, when the hero is wounded in crime-fiction battle, that’s the part of the body that is disproportionately hit, because it’s seen as the ultimate have-it-both-ways solution to showing humanity and invincibility in equal measure.

But believing that anybody can shake off a shoulder wound and still function in a fight requires a suspension of belief I find it hard to believe that anyone can believe. The shoulder isn’t just muscle mass that can absorb a bullet without irreparable damage or paralyzing pain; it’s a region of the body in which soft tissue is tightly clustered with muscle, joints, bone, blood vessels and nerve bundles. One doctor unpacks the reality of shoulder wounds here.

It adds: “A study of 58 gunshot victims wounded in the brachial plexus found 51 of them needed follow-up surgery to deal with blood vessel damage, severe pain, and loss of motor function. As for the subclavian artery, a study from a New Orleans hospital reported that out of 16 cases of acute injury thereto, four patients died and another lost the arm.”

The idea that a bullet would strike just soft tissue, or that a soft-tissue strike wouldn’t significantly slow anyone, stretches plausibility to the point that I wonder if crime authors who use the device really have as much contempt for their readers as the facts would seem to indicate.

Fortunately, there seems to be a growing awareness of, well, the tropey-ness of the trope. Tyler Dilts is the author of a series of Long Beach, California police procedurals whose main character, detective Danny Beckett, suffers from chronic pain from an extremity wound — the wrist, not the shoulder in this case. Danny’s entire personality has changed as a result of his pain, his dependence on opioids to wallpaper over the pain a little, and his loss of physical function. The novels work on their own, but especially shine as a smart, realistic inversion of the shake-it-off trope, and as such breathe fresh life into a subgenre that’s often gone stale. 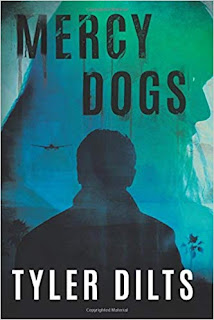 Could not agree more on Tyler's work, and his deft use of the lingering effects of physical trauma to break new ground in what is definitely NOT just another police procedural series. For my money he ups his game in his latest, a standalone called Mercy Dogs, wherein a veteran Long Beach cop, a victim of a gunshot to the head, looks into the disappearance of a neighbor while still recovering from the long-term effects of his shooting. A "flesh wound easily shrugged off," it is not. Definitely a must-read.

And where Tyler Dilts' work serves as something of a flat refutation of the nearly harmless shoulder wound trope, he's not exactly alone in his realistic portrayal of the after-effects of physical violence in crime fiction. If anything, the first two decades of the twenty-first century have borne witness to a trend among crime fiction writers in the direction of far more realistic portrayals of such violence.

(They are still outnumbered by the types of shoulder wounds Jim describes above, but hey, fiction seems to be largely headed in the right direction on this, even if it's not quite there yet, hence the use of the word trend.)

And leading the way was one truly brilliant send-up of the shoulder wound trope.

I'm talking, of course, about Michael Connelly's City of Bones. 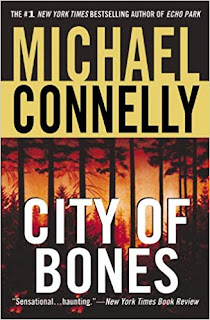 It's somewhat ironic that I credit City of Bones as anything approaching "brilliant."

This is in large part because, when I first read it, I hated this book.

In fact it was my first foray into the world of Connelly's most enduring contribution to crime fiction: LAPD homicide detective Hieronymus ("Harry") Bosch. City of Bones first saw publication in 2002, a time when a much younger me was hard at work on his first ("mistake") novel, and immersing himself in contemporary crime fiction, especially books recommended by other crime fiction writers whose work I respected.

And everyone I spoke with was in agreement: I had to read Michael Connelly. So I got a copy of his latest book, and tucked in.

And at first I loved it. Bosch, a crusty fellow in the best of times, found renewed purpose in a cold case involving the discovery of a serial killer's dumping ground (the titular "City of Bones"), and the excitement of a new love interest in the form of rookie cop Julia Brasher, who, having taken the time to get a law degree and join her father's firm, was old for a rookie (so close enough to his own age that him dating her wasn't some combination of weird and gross).

And then Connelly knocked the whole thing sideways.

Julia had taken note of an old gunshot scar on Bosch's torso, and they spoke at length about it. Next thing you know, she's shot while in pursuit of a suspect, and dies in the hospital shortly thereafter.

This was halfway through the book, and for my money, Connelly had just made a serious mistake: killing off what had been up to this point, the novel's most interesting character. I disagreed with this decision, and nearly stopped reading. But I had to admit how impressed by his writing, his command of the narrative, the tiny details he got right. In the end I respected Connelly's work too much not to see the book through to the end.

In the ensuing chapters, Connelly has Bosch put together that Julia actually intentionally shot herself, attempting to give herself a "shoulder wound" which matched Bosch's, as some sort of strange psychological "rite of passage." And in this case, the bullet bounced off her clavicle and lodged near her heart.

It was only later that I realized what a masterstroke this was. Connelly had given his fans both the stereotypical "shoulder wound" (Bosch's old wound which is healed, so it's not slowing him down at all, and said wound titillates an admiring female love interest) and a very realistic portrayal of what happens when a bullet goes the wrong way in someone's shoulder.

I mean, come on. Does it get any more "meta" than this?

And for our closing thought, back to Jim:

In the end, while a shoulder wound likely won’t kill you, that doesn’t make it anything you’re likely to leave behind anytime soon. As the author of the Washington City Paper report put it: “I still wouldn’t volunteer.”

Thanks to Jim Thomsen for his contribution to this post. He's also one HELL of an editor, so if you're in the market for a pro, hit him up at his website.

Posted by DoolinDalton at 02:46