Meet Me In Vancouver 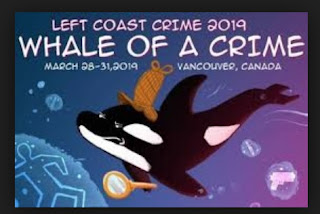 I had a great time the last weekend of March, celebrating Left Coast Crime in Vancouver, British Columbia.  Ran into some past and present SleuthSayers there: R.T. Lawton, Brian Thornton, and Thomas Pluck.  Also old friends like S.J. Rozan, Kate Thornton, Ilene Schneider, and Pam Beason.  Even better I got to make new friends: Dara Carr, Cynthia Kuhn, and T.K. Thorne, among others.

But enough name-dropping!  Let me talk about the highlights of this four-day gathering of 400+ mystery readers and writers.  Naturally that includes panels.

One thing that was new to me: the panels were only 45 minutes long.  That is short.  To my surprise, I thought they worked pretty well but it definitely throws the panelists and the audience into the lap of the moderator.  If that august personage decides to spend the first five minutes reading the bios straight from the convention program, and then five more explaining his/her understanding of the panel topic, and then decides her/his questions are clearly more interesting than those of the audience, well... it can be painful.  One writer was told by an attendee: "I went to your panel.  I wish I had heard you instead of the moderator." 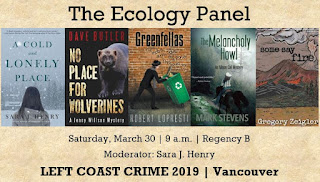 To give you some idea of what goes on, here are just the panels I attended:
Editors
Humour
International Settings
Law Enforcement Professionals
Liars' Panel
Music
Religion
Researching the Perfect Crime
Setting as Character
Short Stories and Novellas
Writing Villains

I was happy to serve on the Ecology Panel with Sara J. Henry, Dave Butler, Mark Stevens, and Gregory Zeigler.  I had suggested that topic but I felt like a bit of a fraud, since the others had written serious tales about water theft, over-development, illegal marijuana growing, etc. while my book is a comic crime novel about the Mafia trying to save the planet.  Ah, well.  We had fun.

The Lefty Award Banquet was a treat.  Each table of ten was hosted by two authors and I was lucky enough to grab S.J. Rozan as a partner.  Like good hosts we brought extra wine and some tchotchkes for our guests (organic seed packets for Greenfellas; chopsticks in honor of Rozan's Chinese-American detective Lydia Chin).  We must have had a good time because our table was the last to leave.

There are two other big events.  At Speed Dating pairs of authors rush from table to table, giving their elevator pitch to groups of readers.  I have been on both sides of this dating spectrum and I can tell you that it's more fun to listen to forty different speeches than to give the same one twenty times.  The other event is the New Author Breakfast where all those who were published in the last year get to give an even briefer explanation of their book.

But let's talk about some little events.  There was a series called One-Shots, in which authors got to talk for fifteen minutes about some topic.  At the Toronto Bouchercon I did one of these about how my library caught the thief who had robbed over one hundred libraries.  Only about four people showed up.  This is not surprising; the events were not well publicized and tucked far away from the main rooms. 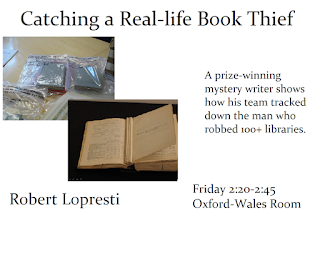 So this year I was ready.  I printed up ten posters (8.5x11) announcing the subject and the location.  I left them on the swag table where writers leave book marks and other paraphernalia.

It worked.  All the posters vanished and about twenty people showed up.  So if any of you plan to do a one-shot at a convention, remember that it pays to advertise.

The next day there was supposed to be a one-shot about author events from the bookseller's point of view.  People showed up for it but, alas, the bookseller, was not able to attend the convention.

But what luck!  My wife was there.  Terri has worked for a decade at the best bookstore between Vancouver and Seattle, a shop that holds more than 300 author events every year.  So she gallantly stepped in and gave the attendees a lot of helpful tips.  When she signed up for LCC she had no idea she was going to be one of the speakers.

Next year Left Coast Crime will be in San Diego.  I recommend it.  In two weeks I will be back with a collection of words of wisdom I gathered at the con.  Here is a sample.  Perhaps you can  guess which  famous writer declared: "Me and God talk.  We go way back."