We have a special guest today. I first met Ken Wishnia at a Prohibition-themed nightclub in Chicago named Tommy Gunn's. It was Bouchercon weekend and the Private Eye Writers of America was having its annual Shamus banquet. Years later Ken edited Jewish Noir for PM Press and found a place in it for one of my stories. This led to me being on a panel about the book, one of my favorite Bouchercon experiences.


His novels include 23 Shades of Black, an Edgar Allan Poe Award and Anthony Award finalist; Soft Money, a Library Journal Best Mystery of the Year; Red House, a Washington Post Book World “Rave” Book of the Year; and The Fifth Servant, an Indy Notable selection, winner of a Premio Letterario ADEI-WIZO, and a finalist for the Sue Feder Memorial Historical Mystery Award.


His short stories have appeared in Ellery Queen, Alfred Hitchcock, Queens Noir, and elsewhere. He teaches writing, literature and other deviant forms of thought at Suffolk Community College on Long Island. He appeared briefly at SleuthSayers once before, but this is his first guest star appearance.


CRIME IN TRANSLATION
by Kenneth Wishnia 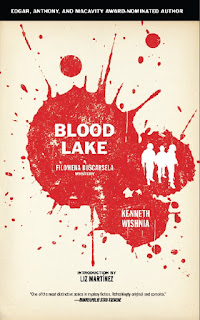 I was thrilled when my publisher announced their plan to bring out Blood Lake, the last novel in my series featuring Ecuadorian-American female investigator, Filomena Buscarsela, in Spanish translation. Latin American readers would finally get to read this novel based on my experiences living in Ecuador for three years, during which time so much crazy crap happened to me that I couldn’t even fit it all into one book. And I would actually get to work closely with the translator.


Good thing, too. Aside from some simple misreadings--a “flaming sword” somehow became a “famous sword,” and a beat-up old car described as a “rattletrap” was translated as un ratonero, a “mousetrap,” which is definitely not the same thing--you might never realize just how many culturally-bound idioms you use in a story, much less a full-length novel, and just how hard they might be for a native of another culture to understand. Let’s just say that most native Ecuadorians have no idea what “Super Bowl Sunday” is. We also had quite a bit of trouble finding the Spanish equivalent of “thick-bladed front-opening lock-back stilettos with good balance and throw weight.”


I learned some fun stuff, too, like the fact that a police APB (All Points Bulletin) is called a “descubrir y aprehender” in Spanish. Remember that: Someday it may save your life.


I learned the Spanish for “freaking” is freaking.


And you’ll be happy to learn that the Spanish title of the classic 1950s sci-fi movie, It Conquered the World is El conquistador del espacio. You’re welcome.


I also had fun working in some of my own experiences with language during the writing of this novel. For several months, I was a civilian employee teaching English to members of the Ecuadorian Army, and at one point during classroom conversation, I used the word “fear,” and they gave me nothing but blank looks. When I pressed them on it, none of them knew what the word meant. I praised them for their bravery, citing this as proof that “The Ecuadorian army does not know the meaning of the word ‘fear.’” 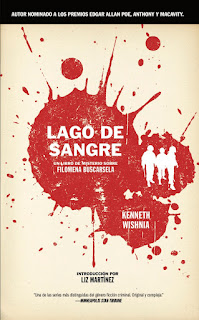 But it wasn’t all fun and games, alas. Ecuador is a beautiful country continually wracked by natural and man-made disasters—landslides, floods, food shortages, protests, crackdowns—and one corrupt government after another. Although these circumstances are not as life-threatening as the dangerous and destabilizing conditions that have led to so much migration by Central American refugees to the United States, such distinctions don’t matter much when these desperate people reach Long Island, where I live and work.


Several years ago, Ecuadorian immigrant Marcelo Lucero was murdered by some “nice” kids from stable, middle-class suburban homes who hopped into an SUV one night and drove to the town of Patchogue looking for a “Mexican” to jump. Another Ecuadorian immigrant in the news recently is Pablo Villavicencio, an immigrant who came to the US illegally in 2008, but who never committed a crime, who is married to a US citizen, has two children who are US citizens, and who applied for a green card in February: he’s the guy who was arrested by Immigration and Customs Enforcement officials and held for deportation after delivering a pizza to Fort Hamilton in Brooklyn.


That’s one of the things that attracts me to crime literature in the first place: it puts us in someone else’s shoes, so we can experience the shared humanity of the “strangers” among us. It poses basic questions about crime and punishment, about justice and injustice, about who gets caught and who gets away with murder. Studies have shown that reading any kind of well-written fiction, no matter what genre, increases the reader’s empathy toward others.


And we all need a little empathy now and then, don’t we?
Posted by Robert Lopresti at 00:00