by Steve Liskow
In 1963, folklorists took a closer look at the lyrics to an obscure 1928 Okeh recording called "Avalon Blues" and used them to track down long-forgotten guitarist Mississippi John Hurt, still alive and well in the town he described in the song. Hurt came out of retirement to become a headliner at folk festivals and coffee houses. His lyrical finger-picking became an inspiration for such upcoming musicians as John Sebastian, Happy Traum, Stefan Grossman and Chris Smither.  All because of an old record.

We talk about clues in mysteries all the time, but other genres use them, too. They may call them "plot points" or "turning points" or something else, but a clue is simply something that moves the character closer to his goal: solving the mystery, finding true love, uncovering the cure for that lethal virus. OR it may send the character or the entire story off in a new direction.

Thanks to TV, we're attuned to discussing fingerprints, ballistics and blood spatter. We know about documentary evidence, too (Like the Hurt lyrics), and those are in our sights even more now because of the Mueller investigation. Both Conan Doyle ("The Adventure of the Dancing Men") and Edgar Allan Poe ("The Gold Bug") have stories that resolve because a character could decipher a coded message, and even the Hardy Boys carried on the tradition in The Mystery of Cabin Island.

Sometimes, though, a clue is less concrete, which gives us a chance to play a little and maybe sneak one past our readers. My favorite NON-clue is in the Sherlock Holmes story "Silver Blaze," which Holmes solved by paying attention to the dog that did NOT bark. A similar idea shows up in my current WIP.

Stephen King turns forensic evidence on its head in The Outsider, his recent novel which Rob discussed a few days ago. We have a man accused of murdering a child, and the DNA samples are undoubtedly his. That's fairly standard. But witness and photographs place him hundreds of miles away when the crime was committed. When the forensics and documentary evidence collide, the cops find themselves in Plan B and the book shifts from a typical police procedural into King's more familiar domain, the Twilight Zone. He does the what's-wrong-with-this-picture stuff as well as anyone else in the business.

Anyone here old enough to remember the TV show Hong Kong? It only ran for one season, starting in September 1960. Rod Taylor played a journalist, and in one episode, he narrowly escaped being run down by a taxi. Soon after that, a man he was talking to was shot. Everyone believed Taylor was the real target and the shooter had bad aim, but later in the show, Taylor tracked down the taxi driver, who told him that he had been paid to MISS Taylor with his cab. That showed that the dead man was the intended victim after all and the fake attempt on Taylor was to conceal the real motive.

My own Blood on the Tracks has Woody Guthrie trying to find a stolen tape of a forgotten rock band, and nobody can understand why anyone cares about the tape. Eventually, Guthrie learns that something may have been recorded OVER some of the tape and that the bad guys are after something besides the musical performance. Which means a different set of people might want it...

In Jane Austen's Pride and Prejudice, Lizzie spends most of the book thinking Mr. Darcy is an insufferable snot and dislikes him for how he has treated her older sister Jane. Eventually, she discovers that he is trying to help her younger sister Lydia, who has run off with a wastrel and is in danger of ruining her own reputation (not to mention her life) and that of her entire family. When Lizzie finds that Darcy is buying the blackguard off, it makes her see him more clearly...and paves the way to their own happy ending.

Some of my favorite plot reversals (call them clues, too) appear in science fiction. Damon Knight's "To Serve Man" offers a manuscript from another planet that those beings give to earthlings as a sign of good faith. It's also a clue. When someone translates the entire text, they discover it's a cookbook and the double meaning of the word "serve" becomes important. The story became an episode of The Twilight Zone in 1962, and many people cite it as one of their favorites.

Pierre Boulle's novel became the basis for the first Planet of the Apes film, and who can forget that closing shot of Charleton Heston looking at the mostly buried Statue of Liberty and understanding for the first time that he's not on a distant planet? The primates have become the dominant species on earth after a nuclear war destroyed civilization. Oops. 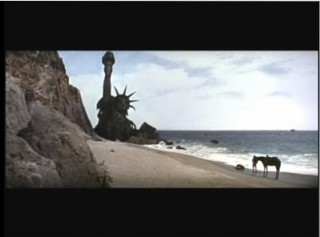 How about you? How do you give your readers the clue that moves the story off the tracks?