by Libby Cudmore
There are a couple obvious influences on my writing – Raymond Chandler, of course, and Warren Zevon, Steely Dan and The Shield. But my first brush with the detective genre was a video game – Sam & Max Hit The Road to be precise.

Purchased in a set of four LucasArts game at the height of my Star Wars fandom in eighth grade, Hit the Road follows Sam, a private eye who happens to be a dog in a rumpled suit, and his partner, Max, a “hyperkinetic rabbity-thing” as they track down a stolen bigfoot across the USA. The game is played as a point-and-click adventure, with text prompts and plenty of insane puzzles to solve.

With a comically neo-pulp aesthetic, Hit the Road also taught me the very early mechanics of how a detective story works – that one clue leads to another and nothing is coincidence. Sam has to say the exact right thing or else the puzzle doesn’t get solved. You have to think beyond the obvious, steal the rasp, attach the hand and the magnet to the golf ball retriever to get the mood ring. Makes total sense, right? But that’s how good detective story is put together – if anyone could solve it, then they wouldn’t need a PI. Sam and Max have the right kind of smarts to hunt down a missing bigfoot. 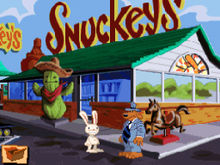 It would be another 10 years before I put the pieces together to begin writing my own detective stories, but I thought of Hit The Road often, just another ingredient in the brain-stew that would eventually become a career as a crime writer.

But more than PI inspiration, it also inspired my love of road trips. In my late 20s and early 30s, my husband Ian and I hit the road ourselves, stopping at enormous balls of twine, mystery vortexes and other curious haunts inspired by Sam and Max. The plushie Max my husband made me for Christmas came with us, and I’m wearing my Max flame halter top in several of my trip photos.

Years later, a new set of games would be released by Telltale on the PC and Xbox, and, with Ian, I played through all of them. A career of writing detective stories had taught me a little more about how to solve the puzzles presented to me, but every so often, had to sneak a peek at the internet to figure out how the heck to retrieve a truth serum or turn off gravity.  My friend Heather bought me the officially licensed Max plushie, and our cat, Bosco, is named for the store next door to their office, Bosco’s Inconvenience, offering Guns, Liquor and Baby Needs in what is one of my all-time favorite weird jokes. We also held an annual Fizzball game every 4th of July for several years, complete with Sam and Max jerseys for the games.

I have yet to reference Hit the Road in any of my books, but it might be time to have my characters joke about grabbing a coloring book at Stuckey’s or a ride on the Cone of Tragedy...or maybe hit the road myself in search of a new mystery to uncover...