by Paul D. Marks
When I write a story or novel, I picture it as a movie in my head, as I’m sure many of you do. In fact, I don’t outline per se but I often write the first draft as a screenplay—more on this in a future blog. But today I want to talk about casting my stories. And since Broken Windows, the sequel to my Shamus-winning White Heat is coming out on 9/10, I’ll start with that.

I’m an “old movie” guy, so I often think of classic movie stars for parts. But since Humphrey Bogart is at that great café in the sky I don’t think he’s the ideal actor for the lead right now. But there was a time when I would often either picture Bogart or Jack Nicholson for many of my leading male characters. When I’d write the characters I’d hear their voices in my head. Once, while working on a script with a producer he suggested Harrison Ford and Michelle Pfeiffer for the leads and who was I to argue with that, especially since he’d worked with them and it was a real possibility. Ultimately, that didn’t get made. But it was nice while it lasted.

So in my mind I might visualize Jack Nicholson or Humphrey Bogart delivering a line of dialog but I can't write that in my novel. I have to convey that feeling, the essence of that character without writing "now imagine Jack Nicholson saying this line." But it does help to have that visual image in my mind as I write dialogue  and description and describe the actions.

Now to my perfect casting:

Broken Windows is set mostly in Los Angeles in 1994, during the fight over California’s notorious anti-illegal alien Proposition 187—a precursor to the immigration fights going on in the country today. While the storm rages over Prop 187, a young woman climbs to the top of the famous Hollywood sign—and jumps to her death. An undocumented day laborer is murdered. And a disbarred and desperate lawyer in Venice Beach places an ad in a local paper that says: “Will Do Anything For Money.”—Private Investigator Duke Rogers, and his very unPC partner, Jack, must figure out what ties together these seemingly unrelated incidents.

So, who would I cast in the main parts? Of course this changes as time slips by. My ideal casting for Jack would have been Nick Nolte in his prime. But these days, I’m thinking John Cena or maybe Michael Fassbinder or Christian Bale. And for Duke, Mark Wahlberg or Ryan Gosling. Maybe Jeremy Renner, as Duke’s not a big dude. For Eric, the disbarred lawyer, Amy suggested Robert Downey, Jr., and he would be perfect. Maybe a little older than the character, but those things often change from book to movie. Eric’s girlfriend, Lindsay, AnnaSophia Robb.

For the mysterious Miguel, who responds to the lawyer’s ad to do anything for money, maybe Antonio Banderas. Possibly Edward James Olmos or Andy Garcia. And for Marisol, who sets the plot in motion when she asks Duke to investigate the murder of her brother, Catalina Sandino Moreno. For Myra Chandler (guess who that’s an homage to), an LAPD detective that Duke and Jack run into in both Broken Windows and White Heat, and who’s a bit more sympathetic to them than her partner, Haskell, I’m thinking Jennifer Aniston. Why not? It’s my fantasy. And for Susan Karubian, the woman who jumps from the Hollywood sign, I picture Mila Kunis, although I would hate to kill her off so early in the film….

Ghosts of Bunker Hill series: A series of short stories that have appeared in Ellery Queen. Howard Hamm is the lead detective in this series of stories that take place in the Bunker Hill and Angelino Heights areas (as well as other neighborhoods) of L.A. Howard “inherits” a lovingly restored Bunker Hill Victorian that’s been moved to Angelino Heights when its owner and his best friend is murdered. He’s a modern, high tech guy who, initially lives in a high rise condo on Bunker Hill. In fact, maybe where his current house formerly lived before being moved. There’s only one person I ever thought of when writing this part: Jesse L. Martin of Law & Order fame. When I’m writing Howard, I’m thinking Jesse. There’s a female cop that Howard comes across on cases—and off—Detective Erin Bowen. I think Natalie Portman, with darker hair, would be perfect for her.

Casting is a strange thing and truly an art. If you’ve ever seen different actors in the same part you know what I mean. One person brings something that the other doesn’t. Sometimes it’s better and sometimes not. And sometimes it’s just that we’re used to someone in a part, so if someone else takes it over it’s not that they’re better or worse, just different. At the same time, a good or bad—or just the right—actor in a part can make all the difference for a character.

Who would you cast for your tales, and why?

Broken Windows releases on September 10th and is available for pre-order now at Amazon, Barnes & Noble and Down & Out Books. 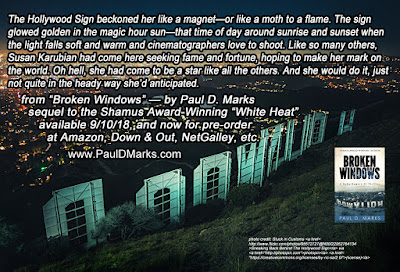