by Art Taylor
In a couple of weeks I'm going to be leading a presentation and workshop at the 4th Annual Spring Writing Intensive at St. John's College in Annapolis, Maryland. The session is about crafting suspense, and it borrows its title from the Ellery Queen's Mystery Magazine blog—"Something Is Going To Happen"—but when I was planning this with the program's organizers, they threw in a surprise: They had already scheduled a session on genre fiction, and they didn't want mine to be focused on mysteries.

Crafting suspense but not in the mystery genre?

Well, I'll admit some surprise at the request—but only since people who ask me to present at these kinds of gatherings usually want me talking about genre fiction. Truth is, I think the broader scope here actually makes for a more interesting discussion—about the range of different approaches available for capturing a reader's curiosity, introducing the stakes of a plot, getting that reader invested, getting him or her to turn that next page.

Here's the full description of my session:


Hooking your readers with a killer opening—that’s a must. But how do you get them to turn not just the first page but the next too? and then the next? …and the next? Crafting suspense may seem like the special province of crime fiction writers, but literary writers and genre writers both can profit from heightening tension, escalating conflict, tossing in the unexpected left turn, and generally keeping readers focused on the idea that “something is going to happen,” (to borrow the title of Ellery Queen’s Mystery Magazine’s weekly blog). This session draws on work by writers including Patricia Highsmith, Alice Munro, Joyce Carol Oates, and Scott Turow to illustrate various techniques for incorporating suspense into your own work.


...though as I'm prepping for the session itself, and here with a couple of recent events, I'm considering substituting a couple of authors for those mentioned above.

I'm writing this post just as news comes out about the death of Philip Roth, one of my own favorite novelists, and earlier this week I picked up the collection Last Stories by William Trevor, who died in 2016—another favorite writer and one of the great masters of the short story, not just now but ever. Neither of these writers is known for flashy, grabby openings; in fact, the New York Times' book review of Trevor's Last Stories commented directly on his low-key approach: "Most notably, his stories open with comments so blandly informational, so plain and unnoticeable, that they arouse no expectation and appear to promise little."

And yet, I find myself drawn in quickly to Trevor's stories, to stakes which are at once high but muted, their intensity downplayed but maybe all the more engaging for it.

Here are the opening paragraphs of Trevor's "Making Conversation" from this final collection: 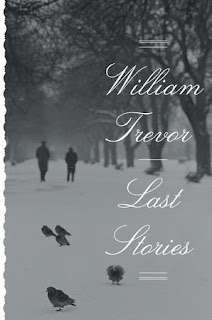 'Yes?' Olivia says on the answering system when the doorbell rings in the middle of The Return of the Thin Man. The summons is an irritation on a Sunday afternoon, when it couldn't possibly be the meter-man or the postman, and it's most unlikely to be Courtney Haynes, the porter.

A woman's voice crackles back at her but Olivia can't hear what she says. More distinctly, the dialogue of the film reaches her from the sitting room. 'Cocktail time,' William Powell is saying, and there's the barking of a dog. The man Olivia lives with laughs.

'I'm not used to these answering gadgets.' The woman's voice is clearer now. There is a pause, and then: 'Is my husband there?'

'Your husband?' Frowning, more irritated than she has been, Olivia suggests the wrong bell has been rung.

The opening scene continues on for three more short paragraphs, but this is enough, I think. The opening scenes set the stage for all that follows: Two women connected by the husband of one of them, their conversation about those connections (though the title "Making Conversation" refers to something else entirely). The pace is leisurely, it would be charitable to say—a sketch of a Sunday afternoon, a small interruption. So is there... suspense?

Certainly there are questions raised here, both within the scene and pointing further ahead. What was said in that crackle that Olivia doesn't hear? Is the woman at the wrong address? Does Olivia know her husband? Is he perhaps even the man sitting there watching Return of the Thin Man?

Spoiler alert, that's not him, but as for Olivia knowing the woman's husband at all....

Conventional approaches to suspense might require the drama to be amped up more forcefully. Not a ring of the doorbell but a blaring of it—the bell pushed and held. Or someone pounding on the door itself. Not a voice lost in a crackle but a voice screaming, shouting, demanding. The irritation would become anxiety or fear. That word insists would need to tremble with a little more menace.

And yet I find myself drawn forward—and the story amply rewards, mysteries in bloom, though perhaps not the kinds of mysteries we think of with genre fiction.

As for Philip Roth, I just reread the opening of my favorite of his books, The Human Stain. I'll quote the first two paragraphs—and you can find the full first section of the opening chapter at the Random House website here: 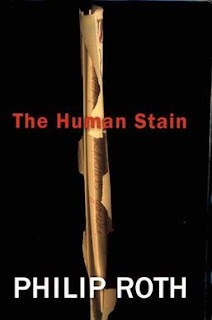 It was in the summer of 1998 that my neighbor Coleman Silk—who, before retiring two years earlier, had been a classics professor at nearby Athena College for some twenty-odd years as well as serving for sixteen more as the dean of faculty—confided to me that, at the age of seventy-one, he was having an affair with a thirty-four-year-old cleaning woman who worked down at the college. Twice a week she also cleaned the rural post office, a small gray clapboard shack that looked as if it might have sheltered an Okie family from the winds of the Dust Bowl back in the 1930s and that, sitting alone and forlorn across from the gas station and the general store, flies its American flag at the junction of the two roads that mark the commercial center of this mountainside town.

Coleman had first seen the woman mopping the post office floor when he went around late one day, a few minutes before closing time, to get his mail—a thin, tall, angular woman with graying blond hair yanked back into a ponytail and the kind of severely sculpted features customarily associated with the church-ruled, hardworking goodwives who suffered through New England's harsh beginnings, stern colonial women locked up within the reigning morality and obedient to it. Her name was Faunia Farley, and whatever miseries she endured she kept concealed behind one of those inexpressive bone faces that hide nothing and bespeak an immense loneliness. Faunia lived in a room at a local dairy farm where she helped with the milking in order to pay her rent. She'd had two years of high school education.

No rush of suspense here—none that I can see—and not even drama in the sense of conventional scene-building. It's all exposition and description. But the foundation for tension is laid: in the words affair and confided, for example; in the contrasts between the idea of an affair and the description of "church-ruled, hardworking goodwives" and "stern colonial women locked up within the reigning morality and obedient to it"; in the contrast between miseries "concealed" and a face which "hide[s] nothing"; and then in the disparity between the main characters' ages—71 and 34—and their educational backgrounds, a classics professor and a high school dropout.

Needless to say, undramatic as all this is, there's plenty of drama ahead.

But does this count as suspense as well?

How about if you add in the chapter title looming over this bit of confidence? "Everyone Knows."

Such are the questions I'm going to try to explore in my session at St. John's—perhaps not with these passages, which I've chosen mainly because Trevor and Roth have been on my mind today, this week, but with similar ones, looking to see how writers introduce small bits of tension and conflict from the start, how they raise the stakes bit by bit, often in excruciating ways, and, of course, what we other writers might learn from these moves.

A bit of news since my last post here: I'm honored that my story "A Necessary Ingredient" has been named a finalist for this year's Anthony Award for Best Short Story, alongside stories by my fellow SleuthSayer Barb Goffman and by Susana Calkins, Jen Conley, Hilary Davidson, and Debra H. Goldstein. As I've mentioned before, my story was part of the anthology Coast to Coast: Private Eyes from Sea to Shining Sea, co-edited by SleuthSayer Paul D. Marks, also a finalist for an Anthony in the anthology category, and featuring stories by several more of our SleuthSayers family. Been a great year for this anthology, and I'm thrilled to have been invited to be part of it. Oh! And I hope you'll enjoy the story itself, which you can read here for free.

See you all at Bouchercon in just a few months!