by Eve Fisher
For those of you who haven't heard, Las Vegas has an ice hockey team!  Just simmer in that thought for a minute.  The baking oven of the Nevada desert air, the frosty ice of the skating rink...  Now, on with the story.  The Golden Knights expansion team took to the ice this season...  and is going to the Stanley Cup.  Yes.  Which is a great story, except that it may break the bank in Vegas.

NOTE:  The way it's being hyped, you'd think that this has never happened before, but it has:  In 1967-68, the St. Louis Blues began as an expansion team and made it to the Stanley Cups - where they lost all four games, bing, bang, badda, boom.

But back to the money.  As the New York Post put it, “When [the Golden Knights were] at 300-1, we wrote a ticket for $400, which pays out 120 grand,” said Jay Kornegay, vice president of race and sports operations for Westgate Casino. “I can’t give definitive numbers, but every book is going to lose a healthy six figures if the Knights win the Cup. Some places are whispering seven.”  (BTW, if you're thinking of laying a bet down now, the bookies dropped the odds a long time ago.)  On the other hand, they're making a ton of money off the people who are pouring in to see the miracle team.  The Rampart Casino offers merchandise giveaways, food vouchers and opportunities for mid-game wagering each time the Knights play. Westgate shows every Knights game on its 240-foot-wide video screen.  “We want people walking through the door,” Duane Colucci of the Rampart Casino said. “Whether or not they’re betting on the Knights, they’ll play video poker, they’ll grab something to eat.”

NOTE:  Winning over odds that long, and a record that dismal, led to claims that spiritual forces worked for Leicester, including the club's Thai owners employing Buddhist monks to bless the players, and the reburial of the recently recovered remains of King Richard III (whose remains had been found in a parking lot in Leicester in 2012) in the city's cathedral in March, 2015.  (Wikipedia)

Anyway, the Vegas bookies aren't facing odds that bad.  And even if they were, Vegas always figures a way to play the odds.  And to shift their services to a new customer base.

Well, the 60s were the last time I spent much time in Vegas.  I was a kid, and my parents would drive up from Southern California to either Vegas or Lake Tahoe to do some gambling.  That was back in the old days, when the mob ruled Vegas, and the Rat Pack ruled the Strip.  I don't remember the name of the casino my parents liked, I just remember that it was huge.  When I was 7-12 years old, I (and the other children who were idling away the time) would run amok among the slots and blackjack tables, or sit and people watch, or just play.  In some ways, it was a much safer, more innocent "Florida Project".  And it was very safe.

Twenty years ago, a child was lured into a Vegas casino restroom, where she was sexually assaulted and murdered.  I turned to my husband, horrified, and said, "That would never have happened in the 60's."  And it wouldn't.  We might have been running loose, but there was always someone keeping an eye on us, wherever we were.  Those large men in suits standing around everywhere weren't going to let anybody touch us.  And if we got too near a door, they'd stop us and ask, "Hey, where are your parents?"  We'd point somewhere or say, "Keno table" or something, and they'd herd us back there, and / or hand us off to a young woman in tight clothing who'd feed us more ice cream.  It wasn't bad.


NOTE:  I understand that today Nevada law prohibits children 100%, absolutely, no exceptions from being on the casino floor.  Maybe that law was on the books back in the 60's, too, but I sure don't remember them acting on it.  Granted, my parents were day gamblers...

Since then, the only other time I was in Vegas was in 2006, when my husband and I met up with another couple (from New York City) to go on a tour of Canyon Country - Bryce, Zion, the Grand Canyon.  Vegas was the perfect hub to meet in, rent a car, and drive out.  But we had to spend one night there, because our flights arrived at such different times.  Frank & Theresa had a friend who told them about a cheap hotel off the Strip, and we decided to stay there.  It was cheap, all right.  It didn't have bedbugs or cockroaches, but I wouldn't have sat down on that worn brown carpet for love nor money.  (When bedtime came, I leaped out of my shoes and into the bed, with nary a toe hitting the rug.)  The main center for entertainment in the hotel was its own mini-casino down in the lobby, and an elevator large enough to hold a coffin and pallbearers, reeking of beer and cigarettes from the uncountable number of topless drunks (of both sexes) constantly going to or from the casino.  Loud, proud, and endlessly fascinating.

But we were hungry, and the hotel had no dining privileges.  We went down to the Strip for dinner, and the food had certainly gotten more expensive - and to be fair, better - than the 1960s.  Afterwards, we walked around for about half an hour in the stifling heat (90s in the dark) to see the outside casino shows.  (Near-nudity, lights, flames, and the occasional pole dance.  Not too different from the hotel, actually...)  Then we got in the car and drove around counting Elvis impersonators and checking out wedding chapels.  The next morning we went down to the Denny's within walking distance and hung with the locals.  Not an Elvis impersonator amongst them, and only a reasonable number of sonic boob jobs.

After that, we headed off into the desert, and wondered again, where was all the water coming from? 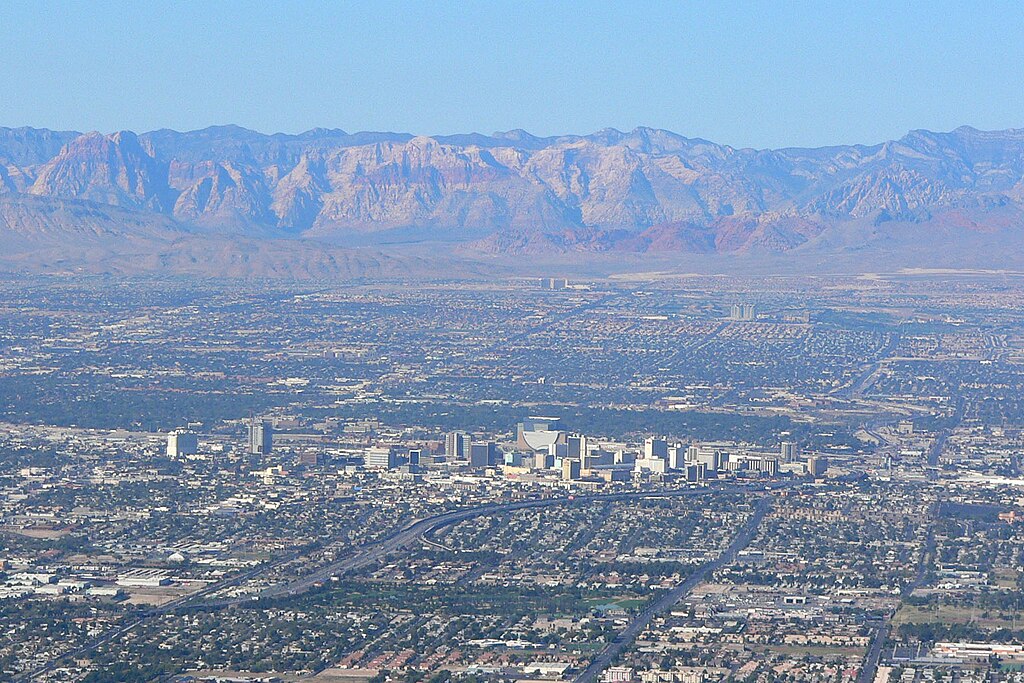 BTW, as many of you may know, the Supreme Court has cleared the way for states to legalize sports betting. "Immediately after the ruling, the stock price for Caesars Entertainment [Nevada] rose 6%." (CNN)

2nd BTW, in 2019, the Oakland Raiders are moving to Vegas, where they'll be known (of course) as the Las Vegas Raiders.  First official NFL game will be in 2020.

I think the bookies are going to make their money back.