by Steve Liskow
When I was young, I wanted to play piano but my parents wouldn't drive me across town to my great aunt's house to practice on her Steinway baby grand. They let me study violin instead, and I quit after one year. Years later when the British Invasion hit, I was one of thousands of guys who saw girls go crazy over the Beatles. In 1966, I spent twenty-five dollars on a Stella Harmony guitar with strings thicker than coat hanger wire and set about cultivating terrible technique and a crop of blisters. 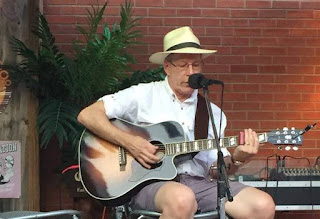 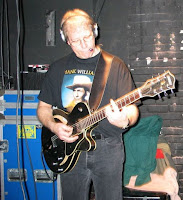 Since then, I've bought, sold or traded at least twenty guitars and a half dozen amplifiers. Right now, I own five guitars, two of which are for sale. Around the Millennium, I bought a used Roland keyboard and have wasted lots of time and a little money on books that promised to turn me into the next Glenn Gould, Otis Spann or Dave Brubeck. None of them did. 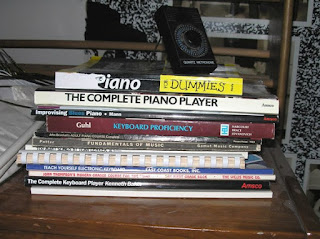 A few months ago, I saw a series of DVDs on playing piano at a ludicrously low price and decided to bet on one more losing hand. Surprise, the videos are excellent. After watching the first three, I understand the keyboard and music theory better than I ever have before. Piano gives you a fuller understanding of what is going on in a song because you play two separate lines. It's changing how I look at and hear the guitar, too.

The old blues players often used alternate guitar tunings, which I avoided until I bought a resonator guitar and started playing slide more often. Different tunings change the sound of a chord you've heard for years, and it forces you to think about what those tones mean. I'll never be great on either guitar or piano, but I'm thinking a lot more about what I'm doing. 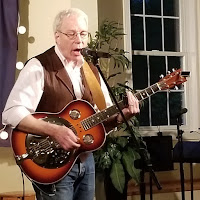 Looking at your writing from a different perspective can have the same effect.

In 2005, I wrote a short story featuring Woody Guthrie (under a different name) and Megan Traine and a rock band. It was a complicated story and one of my friends commented that he had trouble keeping all the characters straight. The story was almost 7000 words long, which meant few markets would look at it, and when I cut characters and words, the whole thing became incoherent. I ran out of places to send it, and it languished on a floppy disc for about four years.

In 2009, someone told me about the Black Orchid Novella Award. Among other requirements, entries had to be between 15 and 20 thousand words. Could I expand that short story into a novella and introduce the large cast more gradually?

Over the next four days, I added nine thousand words and nothing felt padded! I'd never considered writing a novella because at that time the market was non-existent. But now I had one on my hands and I sent it out. "Stranglehold" won the Black Orchid Novella Award and appeared in Alfred Hitchcock Mystery Magazine in the summer of 2010. I was so used to thinking "short story" that I couldn't see it was really a novella waiting for its growth spurt.

A few years later, something felt wrong near the end of a WIP and I couldn't figure out what it was. I swapped manuscripts with another writer, who suggested that I change the point of view in one of the last scenes. Both characters had POV scenes throughout the book, so the change was feasible. It also made the ending much stronger. Someone with more distance could see that right away.

The Whammer Jammers introduces Hartford detectives Tracy "Trash" Hendrix and Jimmy Byrne exploring the world of roller derby. I interviewed skaters, referees, coaches, boyfriends, announcers, spectators, and Hartford police officers before I developed an outline and started writing. After about sixty pages, I felt like I was hip-deep in quicksand.

That night, I watched a baseball game on TV, the announcers giving the play-by-play in present tense, the way they always do. It dawned on me that Roller Derby is a sport, so what if I went back and changed the book from past tense to present? Bingo. I finished the rough draft in six weeks.

I did lots of research for what I thought would be the third Woody Guthrie novel, too. The more I played with it, the more it felt like it would work better with Zach Barnes in Connecticut. From there, it evolved into a police procedural with Trash and Byrne again. Once I have an outline, I usually produce eight or ten pages a day, but this beast needed three weeks to reach page fifty. I put it aside for a month, and when I looked at it again, I saw that two crucial premises actually contradicted each other. Oops. I recycled about half the characters into The Kids Are All Right, a finalist for the Shamus Award for Best Indie Novel.

When you revise, you become more committed to what you already have on paper. You tweak, but you don't rebuild. Looking at it from a different angle helps you see other possibilities. What if the other person is the main protagonist? What if you try it as a comedy instead? Should you expand that short story? Could it become a play, or maybe even a screenplay?

Going back to music for a minute, I remember Leonard Bernstein discussing the opening of Beethoven's Fifth Symphony and saying that the original opening, the da-da-da-DUM, included a flute in the score. Beethoven, one of music's great revisers, realized that a flute didn't belong in that "strong masculine utterance" (Bernstein's words, not mine) and removed it.

Learn from the masters. And maybe pick a different instrument.