Steve Hockensmith is the author of more than a dozen mystery novels. Trust me, them hard-case crime writers ain’t so tough. Today, Steve will touch your heart. Grab a hanky. You’ve been warned.

I wish this were my job description: Make stuff up, write it down. That’s what I enjoy about being a writer. But if you’re trying to get somewhere with your writing — having people actually read it, for instance — there’s a bit more to it than that. 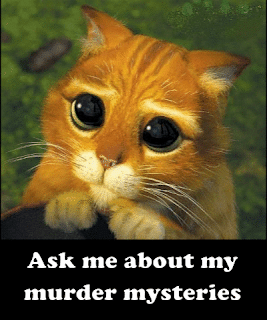 That’s why I’m (sporadically) on social media and (even more sporadically) blog. Every post is a wee little flag fluttering in the breeze. It’s got writing on it, “Don’t tread on me”-style:

And instead of a drawing of a coiled, bad-ass snake, it’s got this cat wearing a T-shirt that says ➜


“Ask me about my mystery fiction.”

I’m never really sure what I should be posting about, but in general I try to follow these rules:
I guess the secret (D) — or maybe it’s another sub-clause to (C) — is “Keep it impersonal.” I don’t like to write about my private life because (switching to numbers to avoid confusion)
But I set that rule aside recently because… well, I couldn’t help myself. I was feeling something and I had to share it. So I started writing a tweet which grew into a message on Facebook which grew into a blog post. And now it’s grown into a guest blog post, because here it is again.


Someone broke the passenger-side window out of my car and stole the shoulder bag I take to work every day. I guess they thought it would have a laptop in it. No such luck for the thieves. And no luck for my family. Because you know what was in that bag? Two monkeys and an owl. Bobo, Lou from the Zoo and Barney the Barn Owl, to be specific.

Every day for the last year or so, my son Mojo picked out three of his “guyzos” (his huge posse of stuffed animals) for me to take to work. During the day, I’d send him pictures of the guys helping me do my job. The makeup of the group changed every day except for one constant: Bobo. Bobo always came with me. Because Bobo was special.

Bobo probably would have offended my Italian friends. He-a sounded like-a theese-a. You know: He had a “Whatsa matta for you?” old school faux-Italian accent. Why? Because it’s a silly accent I can do, and a long time ago it became my job to give the guyzos distinct voices and personalities. (It’s not easy. In fact, there are several guyzos with the same voice. Baby and His Brother Baby, for instance, and they sound a lot like Ted the Christmas Bear who sounds almost exactly like Big Ears the Rabbit.)

Bobo shared Mojo’s distaste for shows of affection, though. “No lovey-doveys!” they liked to shout when things got too icky-sentimental. So I’ll honor Bobo’s preferences and wrap this up.

My wife and I were in a restaurant celebrating our 21st wedding anniversary when Bobo was stolen. When we came out and realized what had happened, we drove around the neighborhood looking for the bag and the guyzos, hoping the thieves would dump everything when they realized they hadn’t snatched anything of value. To them.

We were in tears. Not over an old, stained, to be honest slightly stinky stuffed monkey. The tears were for what Bobo represented. What he gave us. A narrow window into our son’s mind and heart.

That window is wider now. Mojo’s doing fine. He listens and communicates and (usually, in his unique way) cooperates. This morning, when my wife and I told him what had happened to the guyzos, he said, “Oh, no… oh, no.” His lips trembled, and tears came to his eyes. And then, after we talked about it a little longer — about how special Bobo was and how much we would miss him — he said, “Oh, well.” And he was ready to watch his Saturday morning cartoons. 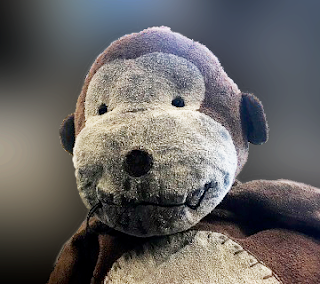 He’s still hurt, I can tell. But at this very moment he’s watching Bugs Bunny and eating a doughnut. He acknowledged his pain, and then he moved on. What we all have to do all the time. Mojo can do it, too. I couldn’t always say that.

A stuffed monkey helped that happen. He’s gone now, but the window he opened remains.

Thanks, Bobo. And goodbye.

Yeah, you smelled. But I love you, my friend…


I got more likes, shares, hits and supportive comments from that post than from anything I’ve done on social media in a long, long time. (It also caught the attention of Leigh Lundin, who asked me if SleuthSayers could showcase it.) But the takeaway isn’t “Ruthlessly exploit your child’s pain.” (At least I hope it’s not.)

That touched people. And many of them responded in a way that touched me. Will that help me sell more mystery fiction? No, and I don’t care.

For me, it’s a reminder that writing (and, yes, that includes blogging and tweeting) can be its own reward. Which is something we writers — particularly we genre writers worried about finding an audience — might occasionally forget.

Steve blogs (sporadically) at SteveHockensmith.com
Posted by mystery guest at 00:00