In between his two Dennis Lehane adapations, Ben Affleck made a picture called The Town, which feels like a Lehane story, but it's based on a book by Chuck Hogan, yet another Boston guy.

I admit I've never been a big Ben Affleck fan. I liked him in support, Good Will Hunting, Shakespeare in Love, didn't like him in leads, Armageddon, Pearl Harbor. (Reindeer Games is Frankenheimer's last feature, so I'd overlook Troy Donahue if he were in it.) But then he surprised me as a director, with Gone Baby Gone. Very solid picture. Lehane was well served the first two times around, with Mystic River and Gone Baby. He wasn't third time lucky: Live by Night went flat. I think Ben Affleck miscast his own film. He wears the clothes beautifully, the drape's to die for, but his character's an empty suit. And after Brendan Gleeson exits the first act, the pacing limps to the finish line in cinderblock shoes.


So, that being said, I didn't have the highest expectations going in, but The Town is a knock-out. It begins with a bank job in Harvard Square, which is my old stomping ground (Ben Affleck was raised in Cambridge), and that got it on my good side. Speaking as a local boy, too, there's an interesting visual consistency in the movie, not strictly necessary, but reassuring - they'll use an establishing aerial shot, and then drop into the neighborhood, and they match. This isn't always the case, and it's obvious that Ben the Director, as distinct from Ben the Actor, is going the extra distance. Fenway Park from a chopper, Fenway Park backstage, under the stands. Bunker Hill Monument? On the ground, the streets around Monument Square. From above, the Old North Church. The chase after the armored car robbery is in the North End. They don't fake it. They don't fake it when they could, when most people wouldn't know the difference between Coolidge Corner and Savin Hill. It shows a genuine appreciation for the right landscape. 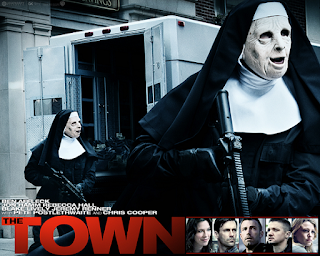 There's a vocal landscape they get right, as well, the cadences. And easy to get wrong. It's not just Ben Affleck, who slides familiarly into the voice, but Jeremy Renner and Blake Lively, not a Valley Girl locution between them. Not that she gets a lot to do, but she does a lot with what she gets. Renner seems to do even less, with more. It's not the accent, quite, as much as it is usage and speech patterns, the mouth feel of the language. He's got the St. Vitus Dance, ants in his pants, a delivery that's one step behind, as if he's puzzling out his own train of thought. He stretches his hesitations and clips his words short, the silences are eloquent and threatening. 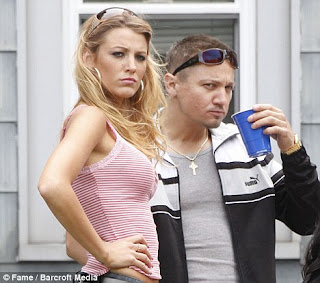 Speaking of Jeremy Renner, the two serious relationships in the picture are between Renner's Gem and Affleck's Doug, and between Doug and Rebecca Hall's Claire. Gem is a silent partner in Doug and Claire's relationship, besides, not that she knows about it, because if there's the slightest chance of Claire ratting out their crew, Gem will cap her without a second thought. 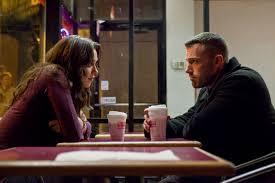 Which brings us to what Jon Hamm's FBI guy calls, "Your fuckin' Irish omerta." The Town is a heist picture, and the town in question isn't Boston at large, but Boston in small, specifically Bunker Hill, Charlestown. It's a movie about clannishness, about class loyalties, about family in the larger sense, of immersion, of race memory. It's specific about place, and place experienced as density. A sudden phrase beings it back, a sharp smell, a retinal afterimage. The place of heart's desiring. The fact that these guys are a criminal family, a crew, a marriage of convenience, misses the point. This is the air they breathe. This is what they know. This isn't something you can change out of, like a pair of pants.

The robberies themselves are set pieces, kinetic and tense, adrenaline and endorphins, wound up tight. The personal scenes have a dark energy, what's said, what's held back, a dangerous edge. Here's a for instance.
Doug goes to see Gem. "I need your help. I can't tell you what it is. We're gonna hurt some people."
Gem waits a beat, looks up. "Whose car we gonna take?"

Ray LaMontagne's Jolene plays over the final credits. It's a killer.
Held you in my arms one time
Lost you just the same

I saw The Town when it came out, David, and I remember liking it. But your piece makes me want to see it again. I do remember the Renner character being pretty intense, if I remember correctly.

He got an Oscar nomination for it, Paul. Reminiscent of the guy Tom Sizemore played in HEAT, a picture Affleck says influenced THE TOWN. Affleck also remarked that if a scene was going flabby, "all you had to do was cut away to Jeremy," even if he were just sitting at the table in a diner - he gave off that much ferocity. Scary good performance.

Thanks for the tip about the movie. Always interested in movies based on a novel. Not that original screenplays aren't great as well.

I know I read the Chuck Hogan novel The Town is based on. I don't remember the title, but I do remember that I liked it a lot.

I think Live by Night is Lehane's weakest novel and I was surprised they decided to make a film out of it. I wasn't surprised by the reviews (I also know a once-fellow-actor who had a minor role in it and loved working with Affleck), though. The book won Lehane his long overdue Edgar, but...

Gone Baby Gone is one of my favorite Lehane novels and I think Affleck did an OK job with it except that he had to simplify an emotionally complex book to make the movie less than about four hours. Ed Harris and Morgan Freeman are both brilliant actors, but I don't think either of them was appropriate for the roles they played, either.

Funny thing: as soon as I saw the subject of your piece my head went straight to "Whose car we gonna take?" Just nails the characters and theme, doesn't it?

David, we’ve chatted about Boston and Cambridge. More than most cities, they seem the venue of high expectations and low crimes. I hadn’t known what The Town was about and, if it weren’t for your commentary about it, might have missed it.

Some lines make a movie, and that one, "Whose car we gonna take?" nails it.

Steve - Chuck Hogan's book is PRINCE OF THIEVES. Aaron Stockard worked on the screenplays for GONE BABY GONE and THE TOWN, but not LIVE BY NIGHT, and Ben should probably have gotten Lehane on board. The Coughlin trilogy is tricky to adapt, because so much of it is internal, and from what I gather, the rough assembly of LIVE BY NIGHT ran over 3 hours. The obvious model, for me, is ONCE UPON A TIME IN AMERICA, but this is a prime example of reach exceeding grasp. The cinematography, though (Robert Richardson), is extraordinary.