by Art Taylor
The annual Malice Domestic convention is right around the corner—April 27-29 in Bethesda, Maryland—and two of us SleuthSayers have stories up for this year’s Agatha Award for Best Short Story: Barb Goffman with “Whose Wine is it Anyway?” and me (Art Taylor!) with  “A Necessary Ingredient” (mine with ties to other SleuthSayers as well, since the anthology which includes it, Coast to Coast: Private Eyes From Sea to Shining Sea, was co-edited by Paul D. Marks and features stories by several members of our group too). Three other fine writers/fine stories round out the slate: Gretchen Archer’s “Double Deck the Halls,” Debra H. Goldstein’s “The Night They Burned Ms. Dixie’s Place,” and Gigi Pandian’s “The Library Ghost of Tanglewood Inn.” The Agatha Awards will be presented at the annual Agatha Awards Banquet on Saturday evening, April 28. 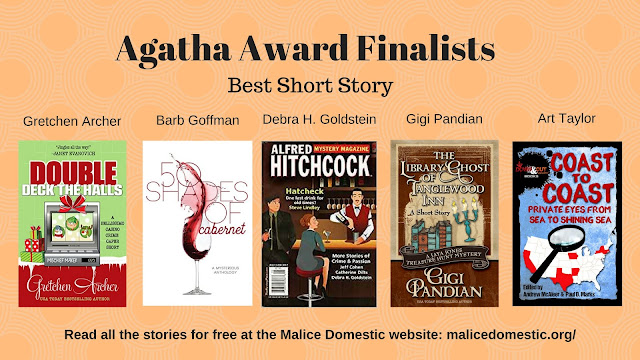 In advance of the big weekend, I invited the finalists to answer a question about their nominated stories, and I’m glad to share these reflections here. Please note that you can read each story for free through links in the paragraph above and in the headers to each response below.

Here’s the question: What was the biggest challenge you faced in writing your particular short story and how did you overcome it?

And the responses, in alphabetical order by last name:

The biggest challenge I faced writing “Double Deck the Halls” was also the most fun. One of my characters, in dire need of salvation, couldn’t speak. She could only communicate by humming Christmas carols. My mission, as her author, was to find appropriate song lyrics for her to hum so she could help her rescuer, a senior citizen with nothing but the retirement accessories she had on her person, save her. First, the lyrics had to fit the story, as in answer specific questions and convey detailed instructions. Not only that, the lyrics had to be in the public domain for me to use them. Writing a character who could only communicate in holiday tunes was so much fun. (And challenging!)

My biggest challenge in writing the story was overcoming the issue that I rarely drink wine (or any alcohol) and didn't know enough about cabernet to use it properly in a story. (I know. Sacrilege!) The anthology requirements were that the story had to involve a mystery/crime involving cabernet and it should be lighthearted. So I started doing research. I scoured the internet, reading wine websites, wine blogs, even newspaper stories involving wine. The most interesting item I came across was a Japanese hotel that fills its hot tubs with red wine, but I couldn't come up with a good idea stemming from that tidbit.   Finally I read about how some people can be fatally allergic to the sulfites in red wine, including cabernet sauvignon, and an idea began forming. What came to me was a story about a seventy-year-old woman, days from retirement from a job she's loved for decades. But in these final hours, she realizes she hasn't been appreciated as she should have been. So she decides it's time to teach some lessons about the importance of caring more about people than appearances, and what I learned about wine allergies enabled me to make the story work. So the moral of my personal writing story here is that you don't have to be an expert on a topic to write about it. You can always learn the information you need to make your story work. Just keep at it.

“The Night They Burned Ms. Dixie’s Place” combines the impact of an exchange between a nine-year-old boy and an adult during a Civil Rights era evening where there is a murder in a house where the sheets are changed more than once a night. My biggest challenge was to make the voices of the child and the adult believable and recognizable to the reader. It was easy to establish the heat and tension of the setting of a 1960’s non-air-conditioned kitchen through references to the linoleum floor, catching a breeze through the screen door, and grabbing a glass from the drainboard, but making the characters’ voices realistic rather than stereotypical required nuanced layering of details. Rather than pounding the reader with what the characters said, wore, thought, and did, my challenge was to present a sufficient build up of these things, sentence by sentence, to trigger each reader’s personal reactions and memories. By engaging the reader through evoked recollections or associations, “The Night They Burned Ms. Dixie’s Place” hopefully succeeds in establishing and resolving a crime while contrasting the innocence and bravado of childhood as it is lost with an adult’s acceptance of life as it is.

Gigi Pandian on “The Library Ghost of Tanglewood Inn”

I write fair-play puzzle plot mysteries, stories in which a big part of the fun is that clues are hidden in plain sight for the reader. “The Library Ghost of Tanglewood Inn” is a locked-room mystery, the style of mystery popularized in the Golden Age of detective fiction that takes puzzle plots to the extreme by solving a seemingly impossible puzzle.

Whenever I begin writing a new locked-room story, my biggest challenge is to set up a clever twist so the big reveal is satisfying to the reader—something that seems impossible, but if you pay attention closely, you can see what really happened.

I’ve always loved puzzle plot stories with a satisfying twist; they epitomize why I love mystery. Locked-room mysteries are the ultimate puzzle, and can be the foundation to build so much more into a story. Impossible crime stories frequently include hints of the supernatural, creating a Gothic atmosphere that’s like reading a ghost story—but there’s always a rational explanation.

To meet the challenge of coming up with fresh ideas for impossible crime stories, my process is that I work first on a paper notebook that I fill with ideas. Sometimes a short story comes together quickly, and sometimes it can take years between when I think of an initial idea and when the ideas come together to make the twist successful. There’s one story draft I wrote five years ago, and I’m not yet satisfied with the ending so I haven’t send it out yet! But happily, I’ve written enough impossible crime stories that turned out successfully that I have a collection of Jaya Jones locked-room mysteries being published later this year.

The twist in “The Library Ghost of Tanglewood Inn” was also challenging because there’s a double-twist at the end. That made it one of my most challenging—but also satisfying—stories I’ve ever written. I hope you’ll enjoy it.

Art Taylor on “A Necessary Ingredient” from the anthology Coast to Coast: Private Eyes from Sea to Shining Sea

Though I was pleased to have been invited to contribute a story to a private eye anthology and though I love and often teach works by Dashiell Hammett, Raymond Chandler, Ross Macdonald, etc. in my classes at George Mason University, I’m not actually a regular writer of private eye stories and don't think I've ever written anything traditionally hard-boiled. I think I’ve only had two PI stories published before—one a parody, the other steeped in the fantastic—and while I wanted to write this one a little more straight, the small-town North Carolina setting (my assigned region to help the anthology’s stretch “from sea to shining sea”) also posed some challenges  in terms of any potential hard-boiled leanings: No mean streets in my town for my main character to go down, for example.

My solution? With "A Necessary Ingredient," I tried to put yet another twist on the conventional PI tale—Ambrose Thornton has “Private Detective” on his office door but he’s really just an unassuming guy seeking a quiet spot to read old crime novels—and then I drew as much on the traditions of regional crime fiction, in the spirit of Margaret Maron, for example, as I did on the legacy of Hammett, Chandler, or Macdonald in terms of crafting character, setting, and plot. When a new chef in town tasks Thornton with finding a special bean prized in French cooking (a bit of gentrification, this little restaurant), our detective sets out not down any means streets but instead on a tour of local farmer’s markets, roadside vegetable stands, and greenhouses. And while Ambrose references a couple of classic gumshoes here and there, a key twist in the story offers my own nod toward Maron's influences—hopefully keeping the balance of several traditions in play and satisfying readers across a wider spectrum.

Look forward to seeing everyone at Malice in just a couple of weeks!