Acclaimed fantasy and science fiction author Ursula K. LeGuin died last Monday at her home in Portland, Oregon. She was 88.

LeGuin was, by any measure, a great writer. I tore through her Earthsea trilogy while still a teenager. From there I moved on to her science fiction, which really didn't hold my attention. I daresay adolescent boys weaned on adventure fiction were probably not her intended audience while writing those works. Either way, I suspect the shortcoming was mine, and not hers.

When she added to the Earthsea chronicles decades after finishing the original trilogy, I tried the next book out, and didn't finish it. Again, I suspect the shortcoming was mine.

That said, I was, and continue to be, blown away by what is arguably her greatest work, A Wizard of Earthsea, the first book in her Earthsea series. Completed in the late 1960s, it has never been out of print since.

And with good reason.

The book's plot pays homage to a whole raft of ancient and medieval hero cycles while also anticipating the likes of Harry Potter. It is the story of Ged, a poor boy from a poor island, who early on demonstrates a talent for magic, and so is hustled off by his bemused (and discomfitted) family and neighbors to the BIG TIME: a school for wizards. 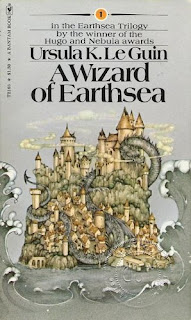 Once there he (stop me if you've heard this before) makes friends and enemies, fails and succeeds at a variety of challenges set in his path, demonstrates tremendous potential and youthful arrogance which so often accompanies such potential. And then while showing off he makes a colossal (and freudian) mistake. Said mistake scars him both literally and figuratively. This mistake's immediate consequences are rectified only at tremendous cost to others. The long-term costs are borne almost solely by Ged himself.

The other two books of the trilogy, The Tombs of Atuan and The Farthest Shore are terrific books in their own right, but don't really stand alone the way A Wizard of Earthsea does.

But for all that, LeGuin was a master stylist, with interesting and very public ideas about writing. She mentored several generations of writers, and was not shy about giving her opinion about the nature of inspiration, and the state of the publishing business itself.

I was reminded of this while working on this post over the last couple of days, and reading a fair number of wonderful tributes to Ms. LeGuin. While reading the indispensible Chuck Wendig's own take on this, I followed a link he posted to LeGuin's extended response to the question: "How do you make something good?"

I'll close with the portion of her response that speaks directly to the concerns of emerging writers concerned about catching on in the publishing business:

At this stage, having the opinion of readers qualified to judge, or a trusted peer-group, can be tremendously useful. Other eyes can see what you’re too close to your work to see, give perspective, open up possibilities.

On the other hand, the pressure of opinion — from readers, classmates, teachers, in a MFA program or a workshop, from an agent, from an editor — may end up as worse than useless. If your manuscript doesn’t follow the rules of what’s currently trendy, the rules of what’s supposed to be salable, the rule some great authority laid down, you’re supposed to make it do so. Most such rules are hogwash, and even sound ones may not apply to your story. What’s the use of a great recipe for soufflé if you’re making blintzes?

The important thing is to know what it is you’re making, where your story is going, so that you use only the advice that genuinely helps you get there. The hell with soufflé, stick to your blintzes.

We make something good, a blintz, a story, by having worked at blintzmaking or storywriting till we’ve learned how to do it.

With a blintz, the process is fairly routine. With stories, the process is never twice the same. Even a story written to the most prescriptive formula, like some westerns or romances, can be made poorly, or made well.

Making anything well involves a commitment to the work. And that requires courage: you have to trust yourself. It helps to remember that the goal is not to write a masterpiece or a best-seller. The goal is to be able to look at your story and say, Yes. That’s as good as I can make it.

And that, in and of itself, is pretty damned good. 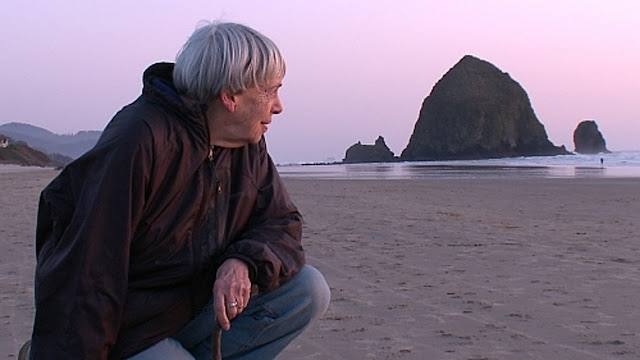 Posted by DoolinDalton at 01:43