If you read or write police procedurals, you probably know far too much about fingerprint patterns, blood spatter, 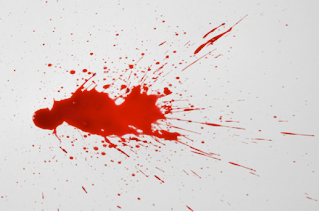 decay rates, DNA matching, ballistics and digital technology. Modern law enforcement relies on forensic evidence to solve crimes, and it works, which is all to our benefit. But it reduces the human (read, "character") factor in modern stories. I can't avoid them altogether, but I try to rely on them as little as possible.

Why, you ask. OK, I'm not a Luddite (although I do write my early notes with a fountain pen) but... 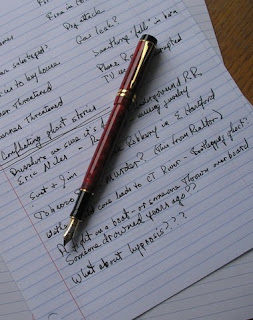 Readers want to participate in your mystery. The stories from the Golden Age--back before you and I were even born--required that the sleuth share his or her discoveries with the reader so we could figure out the solution (or, more typically, NOT) along with him. That's why so many of the classic stories of Agatha Christie, Nero Wolf and their peers had a sidekick as the narrator so he didn't have to give the sleuth's thoughts away. It also explains why those stories are so convoluted and complicated. The writers did what attorneys now call "hiding the ball," burying the real clues in mountains of red herrings, lying witnesses, contradictory information and complicated maps, not necessarily drawn to scale.

The Ellery Queen series featured the "Challenge to the Reader" near the end of the book, stating that at that point the reader had ALL the necessary information to arrive at the "One Logical Solution." It was a daunting challenge that I think I met only once or twice. Agatha Christie said she did her plotting while doing household chores. I'd like to see the banquets she prepared to come up with some of Poirot's herculean feats.

If you withhold the clues and pull them out at the end like a rabbit out of a top hat, readers accuse you of cheating. I still remember an Ellery Queen novel that solved the murder of a twin brother by revealing at the end that there were actually triplets. Tacky, tacky, tacky.

You need to put the information out there where readers can see it, but without making it too obvious.

Magicians accompany their sleight of hand with distractions: stage patter, light and smoke and mirrors, scantily clad assistants, and anything else that will make you look that way instead of at them while they palm the card or switch the glasses. And that's how you do it in mysteries, too.

There are a few standard tricks we all use over and over because they work.

The first is the "hiding the ball" trick I mentioned above. If you describe a parking lot with twelve red Toyotas, nobody will notice one with a dented fender or an out-of-state license plate. The B side of this is establishing a pattern, then breaking it. Often, the sleuth believes that oddball is a different culprit and not part of the same case, but he finally figures out that it's the only one that matters and the others were decoys.

You can also give people information in what retailers used to call a "bait and switch." Stores would advertise an item at a low price, then tell customers that item was already sold out and try to sell them a more expensive version. You can give readers information about a person or event, then tweak it later so it points somewhere else. The classic police procedural The Laughing Policeman hinges on a witness identifying an automobile parked at a scene...then years later realizing that a different car looks a lot like it. Oops.

You can give information and later show that the witness who mentioned it was lying. The trick here is to plant a reason for the witness to lie early in the story and leave the connection until later on. If the reader sees the reason with no context, he'll overlook it until you make it important again when you pull the bunny out of the derby. This is one of my favorites. 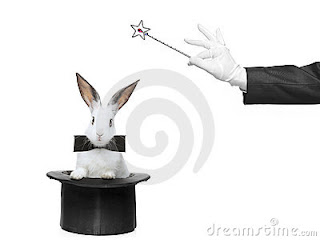 I also like to focus on a fact or circumstance that's irrelevant and keep coming back to it. Later in the story, your detective can figure out that it's meaningless...OR realize that he's look at it from the wrong angle. My recent story "Look What They've Done to My Song, Ma" has PI Woody Guthrie and his musician companion Megan Traine trying to clean up a music file so they can identify the voice that's talking underneath the singer. It's not until late in the story that Guthrie realizes the voice doesn't matter--at least, not the way he thought it did, because the speaker isn't the person everyone assumed it was. That story appears in the July/August issue of Alfred Hitchcock's Mystery Magazine, along with stories by known accomplices John Floyd and O'Neil De Noux. 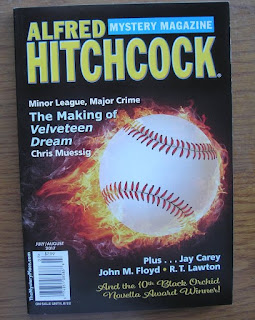 The "how could he know that?" clue gets lots of use, too. Someone makes a comment, suggestion, or observation and the sleuth doesn't realize until later that he couldn't have known the murder weapon or condition of the body unless he was there. If you haven't used this one at least once, raise your hand.

Its second cousin is the condition or event that didn't happen, the old case of the dog that didn't bark in the night, first used in "Silver Blaze," an early Sherlock Holmes story. Its fraternal twin, which makes a handy red herring in the age of technology, is a missing computer file. Since it's missing, we don't know what's on it...or if it's even important. The sleuth can spend pages or even entire chapters worrying about that missing file folder or computer. In The Kids Are All Right, I had two murder victims whose computers were found with the respective hard drives removed. The implication was that missing files would implicate the killer. But can we really be sure?

Now, what's your favorite way to deal off the bottom?
Posted by Steve Liskow at 00:01