A Day in the Life of a Writer – The Writing Life

(Note: Because of the limitations of Blogger, the screenplay format is not totally correct. Also, as this isn’t really a screenplay I’ve cheated and adapted the content for this post.)

Sun streams in through whiter-than-white plantation shutters. A figure stirs under satin sheets. The WRITER sits up in bed, stretches. Rings a little bell and a breakfast of French toast and fresh-squeezed orange juice is brought to him by his ROBOT in a pristine white room with no clutter, little furniture and definitely no clothes strewn anywhere. It’s 1pm on the bedside clock.

Because his life is so perfect, he doesn’t need to go to the bathroom or brush his teeth. It all just magically happens.

He eats leisurely, under an original Edward Hopper painting. He peruses the papers on his tablet, the stock ticker scrolling by on the 75” TV. He smiles big. All is right with the world.

Bright sun, reminiscent of the original Hockney hanging in the Writer’s office, beats down. The Writer swims laps in his Olympic-sized pool. Towels off, sipping a cool Harvey Wallbanger that his Robot made to perfection. He looks fit, relaxed. Tan. And has a full head of hair:

The Writer, dressed cool-casual, enters, his loyal and extremely well-behaved pooch Chandler trailing. He gives a quick nod to that original Hockney. Stands at his high tech Varidesk. Except for the ambient hum of computers and the Baroque music coming from his Echo, all is silent – the perfect atmosphere for writing.

He checks his e-mail. The phone remains silent. The sun spills in on him and Chandler. All is right with the world as he opens his novel’s file and hits the first key of the day.

The start of a perfect day.
FADE OUT.

Take 2 – The Life of the Writer – What I Really Do

Sun streams in through the formerly whiter-than-white blinds. A figure stirs under an old threadbare comforter. The WRITER sits up in bed. He wipes sleep from his eyes. It’s 1pm on the bedside clock.

He jumps out of bed, jams on a pair of sweats and a T-shirt. Says good morning to his dog, Pepper, sleeping in the corner of the room. Pepper barely stirs. Walks into the

where he cleans up quickly. Heads back into the

Tries to get Pepper up. She’s having no part of it. He grabs her collar off the dresser.

She finally gets up. He puts her collar on. Opens the bedroom door.

his other dog, charges in like a herd of wild elephants.

Buster, a very large German Shepherd, leans into the Writer, nearly knocking him over with love, while Pepper leans into Buster. The Writer tries to keep his balance. He heads down the

followed by, uh, following the dogs. They head

so the dogs can do their business.


INT. HOME OFFICE – A WHILE LATER

The Writer enters, followed by Buster and Pepper. He nods to the framed Beatle albums and lobby cards of In a Lonely Place, The Big Sleep and others. He tries to sit at his computer desk, but it’s almost impossible as the dogs are laying so close he can hardly pull his chair out. He finally “rearranges” them, sits at the computer, opens his file and hits the first key.

He looks at the Caller ID – “OUT OF AREA”

He turns back to the computer. From the look on his face we see a great idea has hit him. He starts to type. THE TELEPHONE RINGS AGAIN – ANOTHER TELEMARKETER.

From the rage on his face it’s clear he’s forgotten his great idea. He picks up the phone. No one’s there. SLAMS it down.

He starts to type again. The phone rings. It’s his friend, who always expects him to be home and available and assumes he’s avoiding calls…which he is. He ignores the call. He starts to type again. We HEAR A CHIME – a new e-mail has just come in. A DIFFERENT CHIME – someone’s commented on Facebook. And the Writer, doing his best imitation of one of Pavlov’s dogs, must answer the chime. It cannot be ignored.

He hits play on the video.

WRITER
And a gorilla dancing to Maniac from Flashdance.

He’s about to hit play when THE DOORBELL RINGS (O.S.).

Buster and Pepper BARK up a storm. The Writer puts his hands to his ears.

The dogs charge in, ready to smash the door down. The Writer follows. He opens the front door to see the UPS truck drive off and a package at his feet. He brings it in. What could it be? Maybe it’s a gift from an anonymous fan? Opens it. It’s for the neighbor.

The Writer busily writes – for all of two minutes – as we see via the wall clock. He searches the net – sees a link.

He starts hopping from link to link – doing RESEACH. For two hours – as we see on the wall clock. He returns to his manuscript, types one sentence. Stands. Stretches. Exits.

He opens the fridge. Looks around. Slams the door. Goes into he

grabs some Cokes and returns to the

Puts them in the fridge. Opens one. Notices mounds of dog fur everywhere. Grabs a broom. Sweeps the fur into a huge pile. Plops it into the waste basket. The dogs are at the back door. He goes 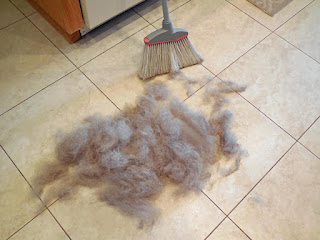 with them. They do their business. He cleans it. They frolic. He weeds, then waters the outside plants.

The Writer enters, with dogs. He sits at his computer with his warm Coke. He’s just about to start writing – more telemarketer calls. He doesn’t answer but they interrupt his flow.

The phone quiets. He’s about to write. The computer stops responding. There’s 1001 updates.

He downloads said updates. Waits forty-five minutes for them to download and install – we can tell by the clock on the wall.

Time to check the mail.

The Writer opens the mailbox.


WRITER
I’m sure there’ll be twenty royalty
checks and a film contract to sign.

He grabs the mail. Bills. And junk mail.


WRITER
I must’ve been dreaming.

Writer returns. Plops the bills on the counter. Sees the drooping plants. Waters the inside plants.

The Writer enters. Sits at his desk – it’s an hour after he left the office. Where did the time go? He’s just about to start writing – when HE HEARS HIS WIFE, AMY, ENTER (O.S.). DOGS GO NUTS.

The Writer enters. It’s quiet. He sits at his desk. Shakes out his hands. Limbers his fingers. Starts writing the Great American Novel from 11pm till 3am – we can tell from the clock on the wall. The Writer does other things till about 6 or 7am, then finally goes to sleep.

And now you know why the Writer keeps such strange hours.

Take 1 is sort of my idealized day. Take 2 is more like my real day, though fictionalized just a little. My comforter really isn’t threadbare. In reality, I’m pretty lucky in that I don’t have to have a day job and when I did it was writing. But the reality also is that my romanticized writer’s life isn’t exactly what we might see in the movies. I do live in a semi-rural area so it’s relatively quiet here, though we live in a canyon so huge double dump trucks go by as there’s a mine up the road. But there’s also a farm and we go there to buy peaches or whatever happens to be in season. Unfortunately, it’s for sale and I hope they don’t turn it into a housing development – Ahhhhhhhh! We also have our own peach tree. And it makes peaches too, lots of them. But the birds always seem to get them before we do.

I do get up around 1pm. Now that sounds pretty “luxurious” except that I go to bed around 7am, give or take. So I don’t really sleep any more than anyone else I just do it at a different time. I do get up and take the dogs outside. Then I usually come back in and have lunch (or breakfast). Do some Facebooking and try to get some work done. The phone does interrupt, mostly telemarketers. It’s gotten so that I almost never answer the phone anymore, even with Caller ID. And even when we had Privacy Manager that was supposed to block telemarketers, most of them got through. I used to love yelling at them or toying with them, but that’s sort of lost its sparkle, so now I just don’t answer the phone.

And since I work at home people expect that I have all the time in the world to talk to them. I have certain friends and family who think I’m available – or should be – any time of the day and night. And some get insulted because they assume I’m here but not picking up. They’re often right. They also assume that I’m watching TV and drinking beer, just having swell time. They’re wrong. It’s not like that. But just like you might be working a job in an office, I’m working a job here and don’t want to be interrupted.

I don’t give out my cell number. The only people who have it are Amy and my mom, and since my mom died a while back I don’t think she’ll be calling, but if she does I’ll let the answering machine pick up... If it’s important she’ll call back. And Amy knows my sleep schedule. So if she calls it has to be an emergency – like wildfire that she’s calling to tell me about. We’ve had to evacuate three times and came close another two. That’s a call I’ll take, but I’d rather it didn’t happen.

So there you have it. My day is a work day, like anyone who goes to an office. My office is just a shorter distance down the hall. And I’m disciplined if I don’t get too many interruptions… What about you? What’s your Writer’s Reality vs. what others think it is?