Still Crazy After All These Years

Tomorrow, April 26th, is the anniversary of the first time the temporary insanity defense was used in the United States. So, since we’re all a little insane, temporary or otherwise, to be writers, I thought I’d mention it and Daniel Sickles, the first person to use that defense.

Danny Boy (October 20, 1819 – May 3, 1914) was born to a wealthy New York family and had his share of scandals in his life, most notably killing his wife’s paramour, Philip Barton Key II (April 5, 1818 – February 27, 1859), the son of Francis Scott Key, the dude who wrote the little ditty we sing before ballgames, the Star Spangled Banner.

Key and Sickles had been buds, good buds. Sickles was a Congressman and Key was the District Attorney for the District of Columbia (DC).

At Sickles’ behest, Key would often accompanied Sickles’
wife, Teresa Bagioli Sickles (1836–1867), to various events when he couldn’t attend. Now that’s a good friend, and a trusting one on Sickles’ side. But the relationship between Key and Mrs. Sickles went from platonic to romantic…and, of course, complications ensued.

Key, who was reputed to be the best looking man in Washington, would stand across Lafayette Square from the Sickles house, waving a handkerchief to Mrs. Sickles as a signal to meet. Sickles figured out what was going and eventually confronted his wife, forcing her to write a letter of confession.

“Key, you scoundrel, you have dishonored my home. You must die!” Sickles shouted on seeing Key waving the kerchief on February 27, 1859. Sickles pulled a pistol, shooting Key, who begged for his life. Maybe the noise of the shots caused Sickles to go temporarily deaf too because Key’s pleas fell on deaf ears. Sickles pulled another pistol and shot him in the chest. 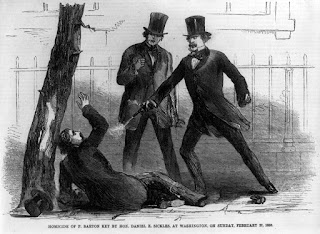 Whether either was singing the Star Spangled Banner at the moment is debatable. What isn’t debatable is that Sickles very clearly murdered Key.

While Sickles was detained in jail awaiting trial, he was visited by Congressional colleagues, government officials and received a letter of support from Prez James Buchanan. The public was also on his side.

Edwin M. Stanton (December 19, 1814 – December 24, 1869), future Secretary of War for Lincoln, and the rest of Sickles’ legal team came up with a brand, spankin’ new defense: not guilty by reason of temporary insanity. Stanton argued that his wife’s affair caused Sickles to temporarily not be in his right mind when he shot Key, thus he was temporarily insane (just long enough to do the deed of course) and, therefore, shouldn’t be held responsible for his actions. (I want that lawyer!) Newspapers torched up the torrid affair in their pages. That won over most of the public. In court, Stanton argued that Teresa’s infidelity drove Sickles mad, that he wasn’t in his right mind when he shot Key. And Sickles was acquitted. And the rest, as they say, is history. Though Sickles’ history didn’t end there.

The fact that Sickles murdered someone, and that that someone was the son of a very well-known person and an important person in his own rite, doesn’t seem to have hurt his career at all. After that little detour he became a Union general in the Civil War, actually serving with distinction: He was awarded the Medal of Honor. He lost a leg in the war, which he sent to Washington to be buried in Arlington National Cemetery so he could visit it on occasion (not kidding!).

After the war he did a Wild Wild West spy mission to Colombia. He also served as U.S. Minister to Spain from 1869 to 1874. And he was elected to Congress more than once. And we know from his past that he was eminently qualified for the job...

Both Sickles and Teresa claimed to have forgiven one another, which provoked outrage from the public. Though in reality they were estranged from each other. She died young of tuberculosis in 1867. He later married a Spanish woman he’d met while posted in Spain after the war. They had two children.

So next time you’re on trial, considering a plea of temp insanity, be sure to remember Sickles and Stanton in your prayers. ;-)

Note, while I appreciate any thoughts and comments you have, I might not be able to respond as I usually do this time. But I do appreciate them as I’m sure the others who read this will.

Anthony Nominations close soon. Which means you still have time to read my story “Ghosts of Bunker Hill,” from the 12/16 Ellery Queen. And which was voted #1 in Ellery Queen’s Readers Poll for 2016. It’s available FREE on my website along with “Nature of the Beast,” published on David Cranmer’s Beat to a Pulp, and “Deserted Cities of the Heart,” published in Akashic’s St. Louis Noir. All from 2016 and all eligible. Click here to read them for Free. 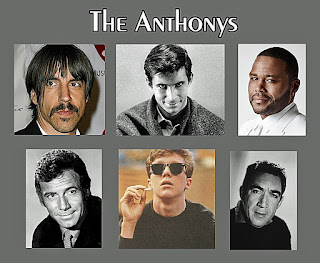