Few things are harder than one’s own – or indeed one’s society’s – unspoken assumptions, biases, and thought patterns. Having just made my way though more than 1200 pages of the Chinese science fiction trilogy, The Remembrance of Earth’s Past, I have been struck by how ethnocentric much of our own popular writing is and also how easily good fiction can be constructed out of different materials and ideas. 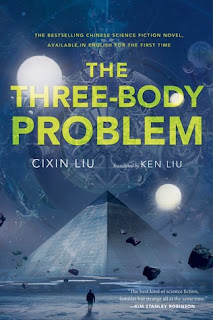 Cixin Liu is a popular and award winning science fiction writer in the People’s Republic of China. Except for some short stories, his wildly ambitions trilogy about earth’s encounter with an alien civilization was American readers’ introduction to his work. Launched with The Three Body Problem, the trilogy begins with a scientist with a justifiable grudge. After her family was persecuted during the Cultural Revolution, Ye Wenjie was disheartened about humanity’s prospects and willing to explore radical solutions. Sounds familiar at the moment!

When a message from an alien civilization appears on her monitor, Ye Wenjie hits the reply button and unleashes a host of troubles, the most insidious of which are the sophons, super sophisticated spy equipment that is launched at earth. Worse follows. 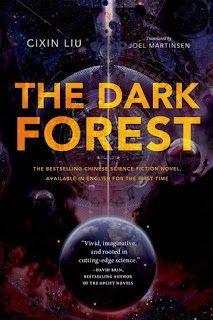 A Western reader inevitably thinks of Pandora, but in her Chinese version, she is no curious girl but a brilliant physicist and theorist of what comes to be called the Dark Forest view of the cosmos. Given Western assumptions about women and science, it is striking to see the range of female scientific and engineering talent that Liu includes in the novels.

There are some gender differences, however, although they do not necessarily fit our own stereotypes. Cheng Xin, the young aerospace engineer who is the protagonist of Death’s End, the last of the novels, has indeed the feminine virtues of compassion and caution, virtues admirable but, in the novel, only helpful in the short run. On the other hand, the macho Thomas Wade, one of the few important Western characters, is effective in many ways, but his aggression and violence also prove ultimately inadequate.
The two people who come closest to solving the problem of a hostile universe are both unlikely and quite unlike the typical Western heroes. Luo Ji, who temporarily staves off disaster, is a bit of a slacker. Appointed to work on global solutions to the alien crisis, he goofs off in Scandinavia and appears to waste the time that should be devoted to intensive research. I can’t help thinking that he is a modern version of one of the Daoist sages, in tune with the universe and destined to achieve success through a sort of focused passivity.

Even less likely is the second possible savior of humanity, Yun Tianming, an ineffectual young man dying of lung cancer and awaiting euthanasia. When he comes into money at the last minute, he buys a star (don’t ask, it’s complicated) for a woman he’s admired from afar, Cheng Xin. She, in turn, recruits him for what will be a dangerous, decades- spanning mission to the alien civilization.

Like Liu, Tianming with his modesty and lack of ambition (but notice that romantic gesture with the star) proves to be a remarkable individual with a combination of ingredients superior in a crisis to either stereotyped masculine or feminine behavior. His gesture of affection for Cheng Xin, by the way, is the closest the novel comes to sex of any kind. And this too seems rather traditional, like the film Cheng Xin admires about lovers who are separated by the length of a great river and never meet. Real love is poetic, spiritual – and often doomed. 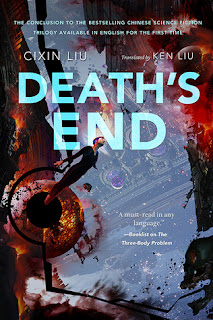 Similarly, the other great staple of our popular literature, violence, is treated in a different way. I think two people are shot during the trilogy and a couple more are murdered by a robot. But fights and quarrels and car chases and the like are definitely out. On the other hand, the body count is tremendous. Whole civilizations are destroyed and the relatively comfortable eras in earth’s history come after terrible population crashes.

The whole history of the earth, the solar system, the galaxy, and ultimately the universe is Darwinian, a matter of the survival of technologically-advanced and lucky civilizations. Nature, itself, hides nasty surprises like the multiple dimensions that can collapse with disastrous results.

Ye Wenjie’s physicist daughter, Yang Dong, even becomes disillusioned by physics, which is as close to a belief system as most of the characters have. She had thought that “The World of our everyday life was only froth floating on the perfect ocean of deep reality. But now, it appeared that the everyday world was a beautiful shell: The micro realities it enclosed and the macro realities that inclosed it were far more ugly and chaotic than the shell itself.”

This melancholy conclusion is more than borne out by the sprawling novels that reach from our Common Era to a scene toward the end of the universe. The latter is more than a little reminiscent of Doctor Who, perhaps because Cheng Xin and her companions are able to time trip, not like the Doctor with a reversible Tardis, but via a combination of hibernation and light speed travel.

Ultimately Cheng Xin and her friends concede that all things must end, but the conclusion of this wildly ambitious and imaginative novel is that the universe can collapse and be reborn, a hope that comforts Liu’s protagonists perhaps more than a Western audience used to heavier doses of positive thinking.
Posted by Janice Law at 00:00