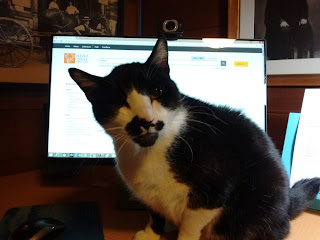 Usually I put a picture of myself at the top of this piece, figuring you should suffer in order to read my wisdom.  However, that is not me over there.  It is Charlie, who likes to sit on the desk between me and the screen.  He decided to co-author this piece, sort of.

Years ago  I saw an artwork by Robert Rauschenberg entitled ERASED de KOONING DRAWING, which was just what it sounded like.

And such is the case here, with me playing de Kooning and Charlie as Rauschenberg.  (You get to decide which is the bigger stretch.)

See, after I had poured hours of research into this piece and done most of the writing Charlie stuck his paw on my keyboard and erased it.  (Blogger is unforgiving about some things, as all of us SleuthSayers know.)    I put it back together as best I can.  When you go to Heaven perhaps St. Peter will let you read the Platonic ideal of this blog entry. Unless, of course, St. Charlie gets there first.

Today I am offering a quiz of a type I haven't seen before. I am going to give you a list of familiar characters from popular culture.  (You may not know all of them, but trust me, most will ring a bell.)  The question is: How did each of them start out?   The answer is, in one or more of the categories you see on the left.

Here is an example, not on the list below: Zorro originated in a short story by Johnston McCulley. See how easy?

One warning: Some of those categories on the left might get used more than once, or not at all.  Okay.  Go!

Made up your mind?  Here are the answers.

Rosie the Riveter.  Song.  The iconic symbol of women in the World War II war effort originated in a song created by Redd Evans and John Jacob Loeb in 1942.   The image most associated with her during the war was an illustration by Norman Rockwell, cheekily based on Michaelangelo's portrait of Isaiah.  The illustration we associate with Rosie now ("We Can Do It!") was created by J. Howard Miller for Westinghouse factories, and didn't get its Rosie connection for decades.

Smokey Bear. Advertisement.  A lot of people think Smokey started with the black bear cub rescued after a fire in the Lincoln National Forest in 1950.  But the cub was named in honor of the Forest Service symbol who first appeared in ads in 1944.  By the way, the real-life bear lived to old age in the National Zoo and was so popular he had his own zip code (20252). 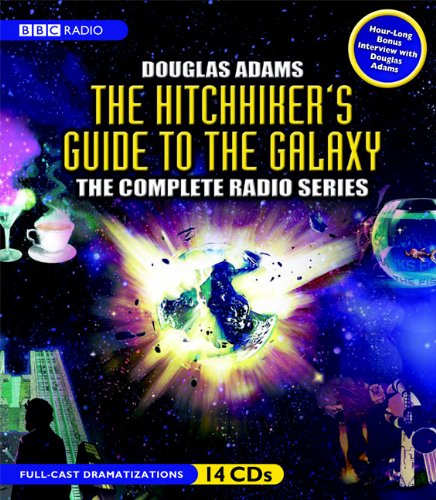 Harley Quinn. Television.  In the Batman universe Harley Quinn was a psychologist who tried to shrink the Joker.  She went nuts and wound up as his sometimes lover/sometimes enemy. She was the only character who made the jump from the animated TV series to the comic book.  Her portrayal by Margot Robbie was generally considered a highlight of the unloved movie Suicide Squad and is supposedly scheduled for another flick this year.

Arthur Dent.  Radio.  Poor confused Arthur Dent has wandered  throughout the universe (usually in a bathrobe) in a multitude of media but Douglas Adams' brilliant Hitchhiker's Guide to the Galaxy started on the radio. It then became a series of wonderful novels, a clever TV show, and a dreadful movie.

Topper.  Novel. Cosmo Topper was the mild-mannered bank clerk who bought a car possessed by the ghosts of the Kirby's, a fun-loving, hard-drinking couple who dedicate their afterlives to making Topper's life more exciting, whether he wants excitement or not.  Before it became a movie and a TV series (with the wonderful Leo G. Carroll in the title role) Topper was a novel by Thorne Smith.  If Hollywood paid Smith fairly for all the ideas they cribbed from him, his descendants would be heating their mansions by burning thousand dollar bills, just to keep them from cluttering up the place up. Boba Fett. Parade or Television.  Boba Fett, the iconic bounty hunter from the Star Wars movies, right?  A lot of people know that.  Some fans know he appeared earlier in the legendarily-despised Star Wars Holiday Special.  But two months earlier he marched, with Darth Vader, at the San Anselmo County Fair Parade.  Why?  Well, Lucasflm was headquartered at San Anselmo back then.

Ma and Pa Kettle.  Real Life or Memoir or Novel.  You tell me.  In 1945 Betty MacDonald published The Egg and I, a comic memoir of life on a chicken farm on the Olympic Peninsula.  Among the characters were the disreputable Kettle family, a lazy and not-too-bright couple with many children.  The movie version was a hit and the Kettles were so popular that they were spun off into a series of popular comedies.

Later the Bishop family, ex-neighbors of MacDonald, sued her, claiming that the Kettles were based on them and they had been libeled.  They settled out of court but when they sued the publisher MacDonald testified and swore she had made the whole thing up. Okay, she said the characters in the book were all composites, not based on real individuals. The jury believed her, or  maybe they didn't care for the plaintiffs, and found in her favor.  So: Memoir or Novel?

Rudolph the Red-Nosed Reindeer.  Advertisement.  Robert L. May created the ninth reindeer for an ad for Montgomery Ward in 1939.  A decade later May's brother-in-law, Johnny Marks, wrote the famous song, growing a number one hit for Gene Autry, and a permanent part of our holiday culture.

The Cisco Kid.  Short Story. The idea for this blog entry came when I read this piece in Dear Rich, a wonderful advice column about intellectual property issues.  Turns out the Cisco Kid originated in a story by O. Henry of all people.  In "The Caballero's Way," he was an American outlaw, and a nasty one at that.    By the second movie (1928) he was a Mexican good guy.

By the way, Dear Rich concludes that Cisco is in the public domain but his sidekick, Pancho, is still under copyright.

John Henry.  Real Life.  Most scholars seem to agree that the song (songs, really) about John Henry were based on an African-American prisoner working on a railroad tunnel after the Civil War.  (They have reasonable doubts about the steam drill contest, however.)  The problem is they disagree as to which tunnel was involved, with major candidates in Alabama, Virginia, and West Virginia.  I lean toward the Lewis Tunnel in Virginia, because I have read Steel Drivin' Man, by Scott Reynolds Nelson.  His choice was a resident in the state prison with the right name, although he was a slim young man from my home state of New Jersey. Nelson provides one convincing bit of evidence: Some of the old versions of the ballad say that the hero was buried at the White House, which sounds like the craziest of fantasies.  However, see the postcard of the Virginia Penitentiary?  That white building in the middle was the work house and when they tore it down they found 300 skeletons in unmarked graves, just outside.  They realy did bury prisoners at the white house.

The ballad of John Henry became very popular during the left-leaning folk revival of the 1950s as a metaphor for the noble worker battling soulless automation, but the early songs about him written by and for African-Americans mostly had a different message: Don't let the bastards work you to death.  Tom Smothers spoke truer than he knew when he summed up the song as follows: "Dumb smart alec.  Thought he could beat a steel drill."