Now for Something Different ...

Adventure novels, always loved them. From the Doc Savage - Man of Bronze books to H. Rider Haggard to David Dodge's PLUNDER OF THE SUN ... I could go on and on.

Secret Agent Spy novels, always loved them. From Ian Fleming to Len Deighton to Adam Hall to John le Carre ... again I could go on and on.

Adventure novels, always wanted to write one. So I wrote one with secret agent spies. Most fun I've had with a computer since I discovered the Bettie Page page. It started with an oil painting my artist-daughter Dana painted for me for Christmas or maybe my birthday. 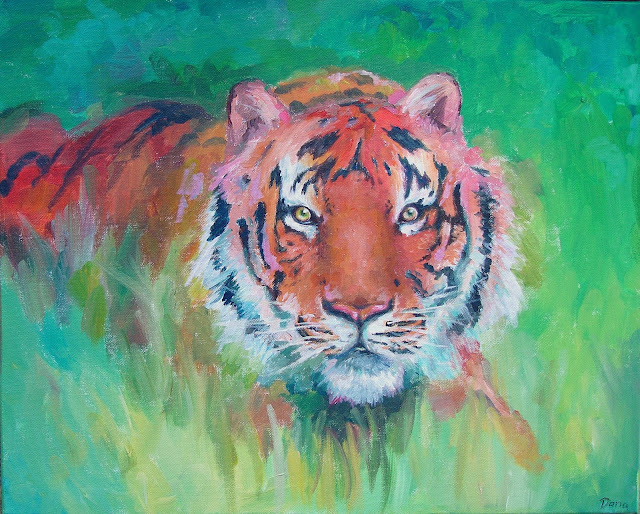 The characters came next and as soon as I created them, they let me know they needed to be different from other secret agent spies. They needed special powers so I gave them super powers, which took the novel into the realm of the paranormal. All right. I grew up with SPIDER-MAN and DAREDEVIL and THE FASTASTIC FOUR ... I could go on and on.

OK, when does the story occur? I just finished my historical mystery THE FRENCH DETECTIVE (set in 1900), so let's go back in time, but not that far. As I kept looking at the tiger, I started thinking INDIANA JONES and the ultimate villains of the 20th Century - Nazis. Hey, I have all that research from my historical novel about OSS assassins set during World War II - DEATH ANGELS. So I set the book in 1936.

OK, where? Some place different. I know - Macao (now spelled Macau). And that's how it began. I put a character in a tuxedo, another in an evening gown and have them run into each other in a giant casino where there's a gunfight with Nazis and Japanese agents (can't leave out the villainous Japanese of 1936).

So where does the tiger tie in? Easy enough. India. So we're off to India. I gave my characters their super powers, added a mysterious stone with special powers and followed them from Macao to India to Goa and into the Indian Ocean to a secret island where Nazi scientists are experimenting on tigers. 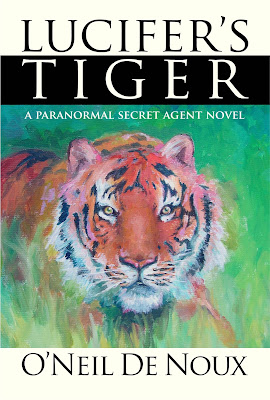 An American with special talents is sent to the Portuguese colony of Macao to discover why Japanese agents are frantically searching for a mysterious stone called the Blaer. Murder quickly follows as the American stumbles on a vivacious brunette who needs rescuing. Or does she? This audacious woman has her own special talents.

The chase is on as Japanese spies and German thugs pursue the American secret agents who turn out to be superheroes with super powers. Against a backdrop of exotic locales - a giant gambling casino in Macao, a voyage through the South China Sea through the Strait of Malacca into the Bay of Bengal to mainland India before our heroes travel to a lost island in the Arabian Sea to battle Nazi SS troop and evil scientists. The two Americans are drawn to one another on this plush island and become enmeshed in a struggle between good and evil.

What diabolical plan do Nazi scientists have for tigers? The perilous adventure becomes a deadly game of cat-and-mouse in the realm of the ultimate predator - the tiger.

Here is the link to the paperback and eBook: https://www.amazon.com/Lucifers-Tiger-paranormal-secret-agent-ebook/dp/B06XCQS4CL/

Can't wait for the 1-star reviews on Amazon. "Hey, what the hell is this?" 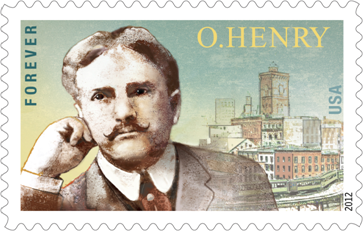 I'll close with a quote from William Sydney Porter - better known by his pseudonym O. Henry (who lived in New Orleans for a short while). He once said, "Write what you like; there's no other rule." Not sure he said this. I got it off the internet. But I hope he did.