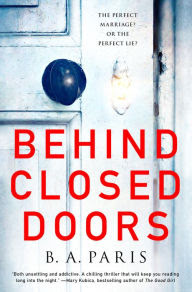 B. A. Paris’ Behind Closed Doors represents another in a long series of HIM— ‘husband is monstrous’— novels, also known as HIS, HIT, HIC (husband is sociopath, toxic, cruel) etc. They’re everywhere. The last one I read (and saw as a film) was The Girl on the Train. Both were recommended by my writer/editor friend Sharon.

It comes as no surprise that half the population devour these books with glee. The key to bridging the gender gap in Women Good / Men Bad literature is whether the author can bring the bad guy convincingly to life. Therein lies the strength of Closed Doors but also its main shortcoming.

Behind Closed Doors is the story of a woman whose nightmare begins when she marries a lawyer. Bad first move of course, but matters immediately grow worse, much worse. No matter how stepfordized she becomes, her situation can never improve but only deepen and darken.

I didn’t fall easily into the story. I wrote Sharon,


“I’m finding Behind Closed Doors … well, uncomfortable. 160 pages in, I keep looking for a place to grab hold, mainly a character to really like. It’s not that I dislike the protagonist but it’s taking time to reveal her. … The writing is a bit high-schoolish with godawful word substitutions for ‘said’. One I remember was “Blah, blah, blah,” he smoothed. But I’m trusting the plot will pay off.”

The part about ‘said’ refers to speech tags, which Rob Lopresti calls unnecessary stage directions. Fancy speech tags ‘tell, not show.’ In other words, if the dialogue is strong enough, a writer shouldn’t have to sit down with a thesaurus and tell the reader what to think or feel. The rule isn’t absolute, so we’re taught if we must use supplemental speech tags, to make certain they actually mean to communicate, to pass on words through talking. ‘Frowned’ and ‘smiled’ fail that test but it didn’t stop the author from employing them.

Right about now, the author is probably sticking voodoo pins in a Leigh doll ($5.99 at the SleuthSayers store), but bear with me, our policy is to write why we like books. Besides, this is a first-time author, so getting a book out in this market is a success in itself.

After finishing the book, I wrote to Sharon again,


“The payoff in the last chapter was worth it– I really liked how Esther involved herself. The writing became stronger as it neared the end, where her internal dialogue of her fear and hope takes over as events wrap up in Thailand and she rehashes everything in her mind during the flight home.”

As I touched upon earlier, characterization proves to be the author’s weakness and great strength. Until the final fifth of the book, I found it difficult to identify with the narrator/heroine. I’m ashamed to say I couldn’t quite decide why– after all, she’s a devoted sister and a potentially loving wife. Yet one gem leapt out to bring our protagonist into focus. As an artist, she created a large painting for her fiancé, literally kissing the canvas using differing shades of lipstick. That’s a lovely hint what she’s like and I wanted more. This is why I stayed with the book despite early reservations.

Unlike The Girl on the Train, the author doesn’t play around trying to fool us. From the outset, we learn this man who came into her life is one sick, well… I can’t think of a sufficiently awful word to describe him.

Paris has created one of the most evil antagonists ever, one who makes Gregory Anton / Sergius Bauer / Jack Manningham (Gaslight) seem like a maladjusted schoolboy. For someone who breaks a heart for enjoyment, there should be a special Dantean subcircle, but this fiend goes several levels worse. I reached a point I felt no ill could match what this guy deserved.

Shortly past the halfway mark, I began to see how this must end. The payoff was worth the trip. In approval, I sipped a glass of sherry, a special red from the Montilla region of Spain. Taste the story; I think you’ll like it.
Posted by Leigh Lundin at 00:00