There are a lot of new TV shows this year, and while I haven't seen them all, I am staking my claim here and now: NBC's Timeless is the best new TV show of this season. And I am not alone in this belief.
What is Timeless? It's hard to believe I need to pose this question, but I know I do. Not everyone has heard of, much less seen, this great show.

Timeless is an hour-long drama involving time travel. (Don't stop reading if you don't like sci fi. This is worth it!) The show begins with a so-called bad guy, Garcia Flynn (played by Goran Visnijic), stealing a newly invented time machine and going into the past to change history so he can keep his late wife and children from being murdered. For reasons that are explained as the season goes on, Flynn's quest requires killing a number of famous people in the past in an attempt to stop a powerful secret organization called Rittenhouse, which aims to change the past to control the future. The government has a second time machine, and it sends a team of three to follow Flynn each time he jumps, trying to stop him from hurting people and changing the past.

Each episode showcases different famous historical times and figures. The main "good guy" is Lucy Preston (played by Abigail Spencer), a whip-smart historian. Her backup, Wyatt Logan (played by Matt Lanter), is a military guy with his own reasons to want to change the past. Rounding out their trio is Rufus Carlin (played by Malcolm Barrett), also super smart, who is a scientist and the only one who knows how to drive the time machine.

I heard someone ask if Timeless is a reinvented Quantum Leap. That's a big no. Nothing against Quantum Leap, but that show from the 1980s was highly episodic; it didn't have the overarching storyline that ties every episode of Timeless together.

So what makes Timeless so great? Let's count the ways. I interviewed a few friends who love the show, and I'll share their and my thoughts below.

First of all, time travel is interesting and cool and fun. You just have to say time travel, and I'm intrigued. But so many time travel shows follow what fans of Star Trek might know as the Temporal Prime Directive: don't change the past; don't tell anyone in the past about the future or else it may be changed. In Timeless, the good guys believe in the concept of the Temporal Prime Directive (though they don't use that name), but they don't succeed in following it, and that has interesting ramifications. Imagine if the Hindenburg didn't catch fire, as happened in the pilot. Or if Eliot Ness didn't get to take down Al Capone. And imagine if changing these events in the past changed the personal lives of our main characters in the present. Lucy returns from the past in the pilot episode to find that the sister she's had all her life has now never existed. She's determined to change the past again to bring her sister back. 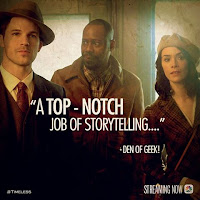 "I was kind of meh on the first episode," author Janet Halpin said. "But when they actually changed history with no do-over (the Hindenburg lands, no fire!), I was all in."

Fan Michaela Shannon-Sank agreed. "I love Timeless! It's a classic time travel plot with a twist--when things are changed in the past, they stay changed in the present. I was at first confused about it. Like, really? They're seriously rewriting history? The Hindenburg? But it works, and it works well."

As the good guys follow Flynn into the past, they go from one historical episode to another, giving viewers a glimpse into the past--the people, the dress, the limitations, and the real history (until it gets changed). Thinking about the Al Capone episode, author Sherry Harris said, "I've learned something new in every episode. Al Capone had an estranged brother who was a cop? Wow!"

Friend Meghan Gray agreed. "The dramatization of historical events is what we are enjoying. Particular favorites are the Lone Ranger and the NASA plots." In the latter, the characters travel to Houston, Texas, in 1969 and interact with African-American mathematician Katherine Johnson. "I love that they are putting people who have been erased from these stories back into the narrative," Gray said. 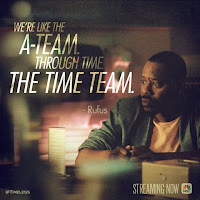 Even the characters get excited by history--learning it and participating in it. Lucy goes all fangirl when she meets Abraham Lincoln and his son. In another episode Rufus is excited to learn that the Lone Ranger was black (as he is). When the trio team up with the Lone Ranger (identified as Bass Reeves), Rufus excitedly says to Wyatt, "We are in a posse with the Lone Ranger!" And when they all team up with Eliot Ness, Rufus says quietly, "We are so the Untouchables right now." The show has pop culture references weaving throughout the episodes that add an extra element of fun.

But the show is more than fun. It has complex characters, which in turn results in angst and big questions. Wyatt is a soldier. He is trained to follow orders and do the right thing, but he is compelled to try to change the past when the opportunity presents itself. His wife was murdered a few years back, and he'd do anything to fix it, no matter the cost. It's a good way to encourage the audience to consider if the ends really can justify the means. 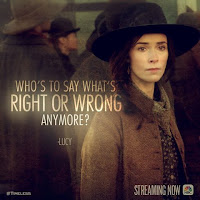 Rufus's race figures into several of the episodes. In the pilot, he's not too keen to start on these adventures, saying, "I am black. There is literally no place in American history that'll be awesome for me." Harris remembered watching that scene with her daughter, Elizabeth, and said that Rufus's take on time travel was Elizabeth's favorite part. "It really puts things into perspective for both of us," Harris said.

But it's not just the good guys who are conflicted. In another episode, Flynn goes back to the beginning of the Rittenhouse conspiracy, during the Revolutionary War. He could save the future, he believes, by killing a certain child. He'd hate to do it, but he would. In the meanwhile, Lucy has come to believe Flynn is right--but she won't let him take that drastic step. We see Flynn struggle throughout the episodes. In one, he sits in church for hours, seeking absolution. In other episodes, he tries to show Lucy how the people she works for aren't really all that good after all and he's not a bad guy. Rather, he's trying to right history, not ruin it. 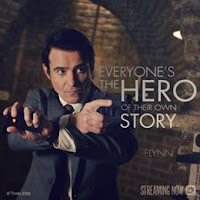 "I love that the lines start getting blurred between saving history/doing what's right/self-interest," said fan Abby Fabian. "I also love the character Flynn, because even though he is the 'bad guy,' he's also a 'good guy,' which can make things confusing for Lucy, Rufus, and Wyatt."

"I don't know about anybody else," Shannon-Sank said, "but I completely sympathize with Garcia [[Flynn]] and would be actively helping him. Except for his killing so many people."

"As a writer," Harris added, "I admire how much I care about the characters. I root for them, feel sad with them, and get scared for them. I hate the villains and every week I can't wait for the next episode. It's what every writer hopes they can do in their own writing." 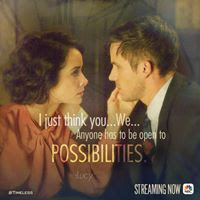 For those who love a little love in their stories, don't worry. Timeless has this too. We see characters risk their lives for others who they love or grow to love--friends and family. We see sparks growing between Lucy and Wyatt. We see romance bloom between Rufus and Jiya, a computer programmer with whom he works. And as a bonus for the viewer, all these actors are "easy on the eyes," as Harris said.

But perhaps the thing that stands out the most to those of us who loved history in school is that the star of this story is Lucy, a woman who is the brains of every episode, who figures out what Flynn is up to each time he jumps, who knows the history in an instant, and who can figure out how to try to save the future by saving the past. Perhaps Halpin said it best: "a freaking HISTORIAN is the one who saves the day."

I'm thinking about Timeless as I write this on Monday night because it should be on at 10 p.m. Eastern time. That's it's normal time. But the show had its season finale last week. Yep, that's pretty early in the TV season. Timeless is on the bubble, I understand. And NBC needs a push to keep it on. That's where we come in. If you love this show, join the Facebook Timeless page. Every follower pumps up the show's credentials. And tweet about it too. Tell NBC to #savetimeless. And if you haven't seen it yet, you can stream the entire season. It's well worth your time. Every viewer helps. 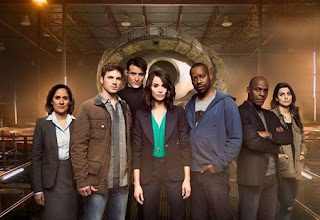 Shannon-Sank summed things up well, saying the show "is so well written and acted and I hope so hard that it gets renewed and lasts for many, many seasons. I mean, they have a lot of things to set straight."

If you love Timeless, please share your favorite parts in the comments. Maybe someone at NBC will read this. #SaveTimeless!
Posted by Barb Goffman at 00:00