by Steve Liskow
My Grandmother and her cousin were elementary school teachers, and her daughter and her husband (my aunt and uncle) were reporters long enough ago that they weren't yet called "journalists." My sister and I were the youngest of eleven cousins, seven of whom also became teachers. Another cousin is a lawyer and at least three of us got involved in theater along the way. They joined my parents in reading to me--and, later, my sister--from the time we could sit upright, and they read with vitality and expression.

That's probably why both my sister and I entered kindergarten reading at about fifth grade level. I also grew up hearing a voice saying the words when I read. Later, a reading specialist told me this was a problem, but I never believed it. I still don't, even though means I can't read more quickly than I can hear the words.

Since we grew up in the Midwest, those rhythms, broad consonants and nasalized vowels became my default sound track. Hemingway, Fitzgerald, Sherwood Anderson, Theodore Roethke (whose sister taught me ninth grade English), and later Elmore Leonard, Loren Estleman and Linda Barnes sounded like family. I left Saginaw, Michigan fifty years ago but the rhythm is still an internal metronome when I write. 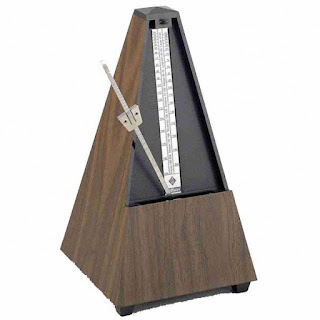 That's good because American English creates meaning by rhythm instead of case endings like the Romance languages. Stress different words in "I can't really bring myself to trust the fellow" and listen to how it changes the meaning of the sentence.

Shakespeare's vocabulary isn't that different from ours--he's writing in Modern English, after all--but he's a master of using rhythm to show actors how he wants a line delivered. The usual iambic pentameter line (ten syllables with the even-numbered ones receiving more stress) is the norm, but if Bill throws in an extra stress, especially in the middle of a line, it forces you to slow down for emphasis. A line with many monosyllabic words goes very slowly and gets lots of attention. 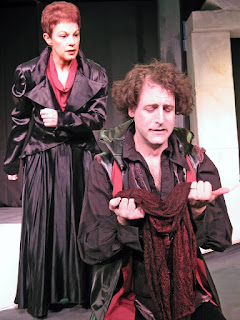 This is the only fully monosyllabic line I remember in the canon, and Paulina (my wife in the picture) says it to Leontes in The Winter's Tale when the latter accuses his wife of being a strumpet and she disagrees. Can you hear how slowly she pronounces the words, nearly hammering them into his head? During my stage career, I performed in about a dozen Shakespearean productions and directed six more. I know several actors who were so comfortable with the language that they could improvise in blank verse if they had to. That's the power of strong rhythms.

Hearing the words I read helped me learn lines on-stage, too. I was one of many actors who learned the lines along with the movement (blocking) because it helped fix the words into my body. It's also how I blocked (choreographed) scenes when I directed: a rhythm shift always told me that someone on the stage should move.

I don't act anymore, but rhythm helps writing, too.

Worry less about being grammatically correct--especially in dialogue--and more about whether or not you can SAY what you've written down. That's my final test, and it's my main point here.

In your final draft, READ YOUR WORDS OUT LOUD. I walk around the room while I read, too (my wife and our cats have learned to ignore me), because speech rhythms and movement rhythms work together. If I break stride or stumble over a word, it means I wrote the wrong word or put it in the wrong place.

Some grammar rules are misleading, too. A split infinitive is a mistake only when it confuses the audience. Sometimes, it makes more sense with the adverb between "to" and the verb, and it may flow more smoothly. The same goes for ending a sentence with a preposition. People tell you it's wrong, but the real issue is that it means your sentence ends with a weak rhythm. In English, you put the words you want to emphasize AT THE END (Thank you, Strunk & White).

When you read out loud, you're more apt to notice repetitions or awkward phrases, too. If you put several words with the same sounds close together, they're hard to pronounce. My favorite, a line I stumbled on one night in performance, comes from Twelfth Night:

Notable pirate, thou salt-water thief,
What foolish boldness brought thee to their mercies 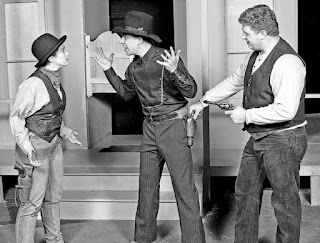 Whom thou in terms so bloody and so dear
Hast made thine enemies?

Punctuation should help the reader read your words aloud, too, so forget the debate about the Oxford comma, the serial comma, the non-restrictive clause, the direct address and everything else. Where do you want the reader to pause to make the words impart the meaning you intend them to have? That's where you put the comma, period, or whatever else you need. If you walk as you read aloud, you can tell. Walking helps you find a smooth natural pace. Speed up for action scenes or slow down for drama. If you walk too slowly, you may lose your place, too. If that happens to me, I need to cut exposition or description, both of which I dislike writing anyway.

I don't write poetry, but I try to end a scene with a strong beat or cadence. I play guitar, too, and at least three bass players will tell you they like to play behind me because I'm easy to follow, which I assume is a good thing.

Nowhere does rhythm matter more than in writing humor. We talk about comic timing, but it's flexible, not absolute. Some people (remember Jack Benny?) can hold a pause so long you feel your hair turning gray, but they still get the laugh. Others deliver the same punch line more quickly and get the same laugh. You have to find your own rhythm when you write, and that means you have to hear it and feel it.

Look on-line and check your local library. If you can find Mark Twain's essay on how to tell a joke, it's still the last word on the subject, a century after his death.

So there it is. Read your work out loud. If you feel yourself falling into a drone or losing your place, you need to change something (cut adjectives, more active verbs, etc.).

With a little practice, you will find that your ears will help you more than your eyes.

And I still hear a voice when I read.
Posted by Steve Liskow at 00:01