We at SleuthSayers are delighted to announce our newest regular member, O’Neil De Noux. He is a New Orleans writer with thirty-two books in print and more than three hundred short stories published in multiple genres. His fiction has received several awards, including the Shamus and Derringer and the 2011 Police Book of the Year. Two of his short stories have appeared in Otto Penzler’s Best American Mystery Stories anthology (2007 and 2013), and he is a past Vice President of the Private Eye Writers of America. Please join me in welcoming my old friend O’Neil De Noux.
— John Floyd

In writing academic historical articles, I strive to be as accurate as humanly possible. Nearly all history graduate students take a class in HISTORIOGRAPHY, the study of historical writing. They know unless you are an eye-witness to an historical event – and that’s one person’s subjective observation – then you must rely on first hand accounts of other contemporary witnesses or second hand accounts complied by other historians. So why worry if you get a minor detail wrong in your historical fiction as I did when I had a character wearing a Banlon shirt several years before Banlon was introduced? Oh, yes. Someone caught me and I had to miss recess that day.


Back to my first statement - when we write historical fiction we are writing FICTION – I have fudged on historical accuracy to write a better story because, in my opinion, historical fiction is like someone’s name. John Smith is a SMITH, part of the SMITH family, not the JOHN family. Historical Fiction is FICTION and fiction outranks history, otherwise you’re writing a history book.


Fiction writers make up stuff. We make up characters and events, sometimes with an historical backdrop.


Artistic license was taken when I wrote my historical-mystery THE FRENCH DETECTIVE, set in 1900 New Orleans. As a New Orleanian I know the term po-boy did not originate until the 1929 streetcar strike. The muffuletta sandwich was created at the Central Progress Grocery Store in 1906. I used the terms anyway. I’ll probably get a detention slip. 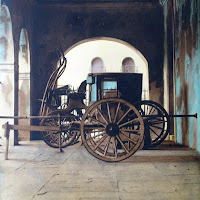 Additionally, I updated the arcane language and dialogue of whatever period I’m writing for a 21st Century audience. I could not have the characters speak as people spoke at the beginning of the 20th Century. Actually, a great number of the people in THE FRENCH DETECTIVE spoke French or Italian at the time. So I wrote the book for a 21st Century audience. There goes another recess in the playground.


In my 1950 novel HOLD ME, BABE, I have a scene where a father gives his daughter a hula hoop and the scene works well. The hula hoop didn’t come about until 1958. I noted it at the beginning of the book to save some smart-mouth from emailing me how I’m wrong.


At the opening of my short story “Death on Denial” which appeared in FLESH & BLOOD: DARK DESIRES Anthology, Mysterious Press (2002) and was chosen for the BEST AMERICAN MYSTERY STORIES 2003 Anthology, Houghton-Mifflin, I put the following quote to set up the story: “The Mississippi. The Father of Waters. The Nile of North America. And I found it.” Hernando de Soto, 1541. de Soto never said that. I made it up because it’s a story. IT’S FICTION.

In my short story “General Order No. 28”, which appeared in ELLERY QUEEN MYSTERY MAGAZINE (May 2004 Issue), I quoted the order penned by Gen. Benjamin Butler. I was fortunate to have a photograph of the printed order and therefore quoted it verbatim. I didn’t have to make it up. I did, however, make up just about everything else in the story. Bottom line – do not be restrained by historical accuracy.


One more example and I’ll shut up. After his success with “A Streetcar Named Desire” on Broadway, Tennessee Williams had occasion to return to New Orleans where he was accosted by an uptown dilettante who chided him for his description of the streetcar lines. She told him if Blanche DuBois took the streetcars as described in his play, she wouldn’t end up on Elysian Fields Avenue. “They simply don’t run that way,” said the dilettante.


Williams replied, “Well, they should.” 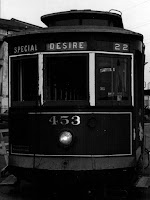 PS: Y’all do know Hitler and Goebbels were not burned alive in a movie theater as depicted in INGLORIOUS BASTERDS.


I have to sign off now. I’m due in the principal’s office.