Kirk O'Field, or How To Blow Up a King


by Eve Fisher
Mary, Queen of Scots (1542-1587).  How you view her depends on if you see her as a romantic, beautiful young woman who had the tragic luck to be rebelled against by her own subjects and executed by the jealous, paranoid Elizabeth I; or if you see her as a beautiful young woman who was stupid enough to marry an unvetted idiot, then marry that idiot's murderer and then flee to England rather than France.  Guess which school of thought I belong to?

Mary, Queen of Scots spent very little time in Scotland until she was 18.  She was shipped over to France at the age of 5 to marry Francis, heir to the French throne.  Her father in law, Henry II, and her mother in law, Catherine de Medici, both found her charming.  Her fiance/husband, probably not so much:  For one thing, Mary was at least 5'11" tall, beautiful, healthy, active, and eloquent, while Francis was "abnormally short", stuttered, and always ailing.  They married in 1558.  (The marriage was probably never consummated, but the debate continues.)  The next year, Henry II died in a jousting accident when a lance splintered and a splinter went up into his helmet and into his eye.

NOTE:  This was foretold by Nostradamus in the following memorable quatrain which is the source for all of Nostradamus' future fame and reputation:


"The young lion shall overcome the older one,
on the field of combat in single battle,
He shall pierce his eyes in a golden cage,
Two forces one, then he shall die a cruel death."

Anyway, Francis was 15 when he became king.  He immediately turned the management of France over to his mother, Catherine, who turned it over to the House of Guise, who promptly ran amok on power.  Barely 2 years later, he died, of anything from meningitis to an ear infection.

And Mary, Dowager Queen in a kingdom that already had one of those (Catherine de Medici was no shrinking violet), was out - sent back to Scotland, which she barely remembered.  And promptly disliked.  Compared to France, Scotland was crude, rough, cold, and besides she was practically met at the boat by John Knox, ultra-Presbyterian, whose whole attitude towards "The Monstrous Regiment of Women" was summed up in his pamphlet of the same name.  (He walked back on this to Elizabeth I, when he realized she was the only Protestant ruler around, explaining that he really didn't include her. She was not amused.)

And of course, everyone wanted her to marry again, fast, because she was only 18, and Scotland needed an heir to beat back the English.  Preferably Scots. 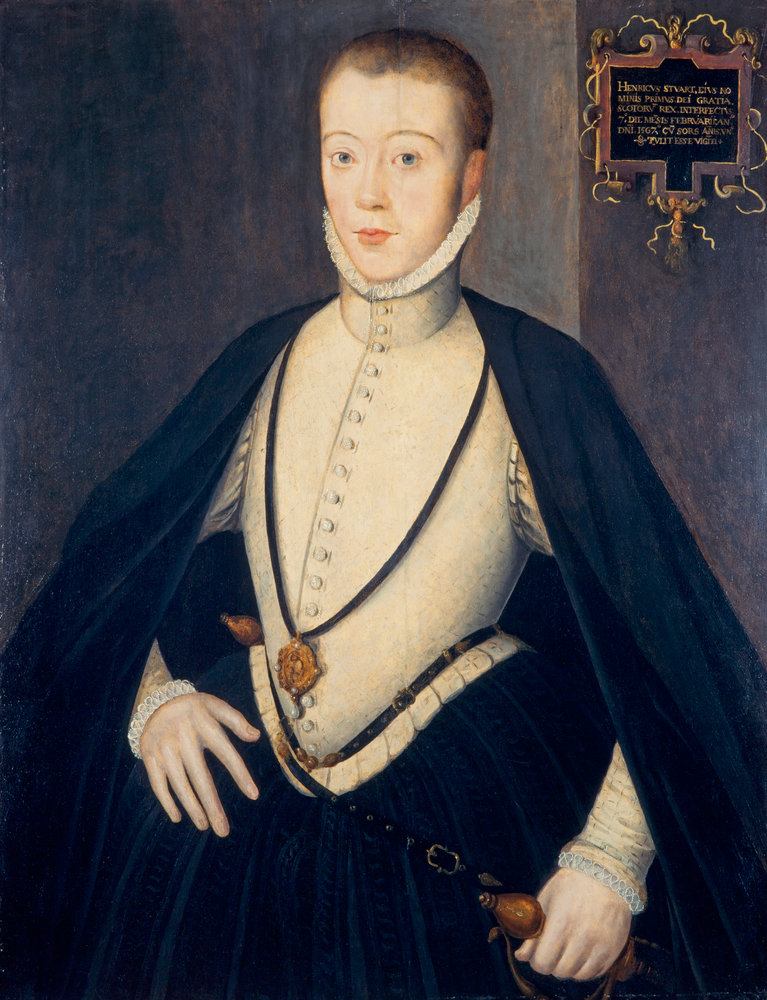 Instead, over the border came a young, handsome, TALL young man, of both English and Scots noble blood, Henry Stuart, Duke of Albany, Lord Darnley.  Six foot three inches, TALLER than Mary, one of her nobles described the meeting:  "Her Majesty took well with him, and said that he was the lustiest and best proportioned long man that she had seen."  They were married in 3 months.  She got pregnant almost immediately.  Great rejoicing.

Except that she had married an arrogant, vain, power-hungry man who had no intention of "just" being King Consort - he wanted the Crown Matrimonial, i.e., to be KING, with Mary as his subordinate queen.  She refused.  Darnley was also not the most cultured of men, and she spent more and more time with her secretary and lute-player, David Rizzio.  Now the Scots lairds all already hated Rizzio (Catholic, Italian, plays a lute, what's not to hate?), and since she was spending so much time with him rather than her husband, rumors flew that she was pregnant by him.  (And stuck for a very long time:  Years later, when one man called Mary's son, James VI of Scotland, "the Scottish Solomon", another quipped, "Aye, for he is the son of David".)

Anyway, Darnley joined in the hatred, and joined with the lairds to murder him.  And they did:  lairds and King came storming into Mary's supper chamber and stabbed him 56 times in front of her.  I have to hand it to her:  she was tough.  She was 7 months pregnant, and didn't miscarry.  She managed to, after the murder, to persuade Darnley that the lairds would murder him next, and got him to help her escape.  They fled on horseback, and again, she didn't miscarry.  Some of the lairds fled to England, which did them little good.  (Elizabeth I wasn't thrilled by lords rebelling against their queen.)  Mary had a bonny baby boy, for which all rejoiced.

So, everyone was great, everything was fine - except that Darnley had developed a bad case of the pox.  Arguments still abound whether it was smallpox or syphilis, but at the time, it was assumed to be syphilis.  (He'd never been known for his faithfulness or sobriety.)

And four months after the birth of James, Mary and her lairds held a meeting to discuss the "problem of Darnley".  Divorce was discussed, but somewhere - and, hopefully, when Mary was not in the room, the nobles agreed that :"It was thought expedient and most profitable for the common wealth ... that such a young fool and proud tyrant should not reign or bear rule over them; ... that he should be put off by one way or another; and whosoever should take the deed in hand or do it, they should defend."[114]

Darnley wasn't entirely stupid - he went to stay on his father's estates in Glasgow, but in January, Mary persuaded him to come back to Edinburgh.  (The rumor was that she promised to bed him again.)  He was staying in a house belonging to the brother of Sir James Balfour at Kirk o'Field. Mary visited him daily.  On the night of February 9, 1567, Mary visited him and then went to a wedding at the palace.  In the late night/early morning hours, a massive explosion blew up the house - later it was proved that the basement had been packed full of gunpowder, and not by accident.  However, Darnley managed to get out before the explosion:  he was found dead in the garden.  There were no marks of violence on the body, or so they said.  (We have no autopsy or photographs, of course.)  It was assumed, however, that he was smothered to death:  and that Mary had ordered it.  And that an old friend and strong ally, James Hepburn, the 4th Earl of Bothwell, was deeply involved.

Elizabeth I wrote her:  "I should ill fulfil the office of a faithful cousin or an affectionate friend if I did not ... tell you what all the world is thinking. Men say that, instead of seizing the murderers, you are looking through your fingers while they escape; that you will not seek revenge on those who have done you so much pleasure, as though the deed would never have taken place had not the doers of it been assured of impunity. For myself, I beg you to believe that I would not harbour such a thought."[124]


NOTE:  And indeed she did not:  when Elizabeth's favorite, Robert Dudley, was suspect of murdering his wife, Amy - who'd fallen down a flight of stairs while he was at court, breaking her neck - Elizabeth sent him away from the court, and ordered a trial.  He was acquitted, and Elizabeth did receive him at court again.  But she never married him, and never would.  In fact, at one point she offered Mary a signed document, guaranteeing her succession to the English throne, if Mary would marry Robert Dudley, which was pretty insulting.  Mary married Darnley almost immediately afterwards.

Now here's where it gets tricky.  12 days later, Mary was "abducted" by Lord Bothwell, and taken to Dunbar Castle.  Was she raped, or did she consent?  (I confess, that I have always wondered why, if he did rape her, she didn't have him executed. I mean, fine, agree to marry him, go with him back to Edinburgh, and then call in the palace guards.  By God that's what Elizabeth I would have done...) Either way, something happened, because they returned to Edinburgh and she married him on May 15.  (And she had a miscarriage in July that was far enough along so that they knew there were twins.)

Nobody was happy with the marriage other than (perhaps) Mary and Bothwell.  Everyone was shocked that she had married the man accused and tried of murdering her husband.  Twenty-six Scots peers raised a rebellion against them, and by June 15, Mary was their prisoner.   On July 24, she was forced to abdicated in favor of her son, James, who was 1 year old.  Bothwell was driven into exile. (He fled to Denmark, where he died, insane, in 1578.)

Mary had a knack for persuasion, though: She managed to get the brother of the owner of Loch Leven Castle (where she was imprisoned) to help her escape on May 2, 1568.  She managed to raise an army of 6,000 men, but lost to the forces of the Earl of Moray.  She fled south, and crossed the Solway Firth into England in a fishing boat.  On May 18, she was in "protective custody" at Carlisle Castle.

A really good question is why she didn't try to get to France.  France and Scotland had always had a strong alliance against the English.  The House of Guise was still powerful, and would have helped her one way or another. If nothing else, she would have been a valuable dynastic pawn.  But she somehow thought that Elizabeth would help her get back her throne, which (imho) is ultimate proof of how stupid she was.  After all, Elizabeth I's position as Queen of England was infinitely safer with an infant King of Scotland than with this loose romantic cannon, still reeking of strong scandal.  Mary spent the rest of her life in England, a prisoner, plotting to regain her throne and, eventually, plotting to have Elizabeth I dethroned and murdered.  After a trial, that was more or less rigged, she was convicted.  And on February 8, 1587, at Fotheringay, Mary Queen of Scots was beheaded...

Elizabeth I never had any children.  James VI of Scotland became James I of England after Elizabeth's death in 1603.  It's almost impossible to know what James really thought about his mother, but two points leap out at me:
(1) James never tried to get his mother released, never wrote to her, and never spoke of her to anyone during the years before her death.
(2) After he became King of England, it took him 9 years (in 1612) to have her body transferred from Peterborough Cathedral in Cambridgeshire to Westminster Abbey in London.
Make of that what you will.