by R.T. Lawton
Nine or ten years ago when I was a member of the board of directors for the Mystery Writers of America, I was in Manhattan for the annual Edgars Awards Banquet. At the time, all board members in attendance were supposed to show up at the Nominees' Champagne Reception and be wearing their name tag. The idea was to greet the nominees, engage them in small talk and make them feel comfortable before the banquet and the awards ceremony.
As I was standing in the Nominees Room with a glass of champagne in hand, an attractive, young lady walked up to me and said, "You're R.T. Lawton." I thought nothing of it because clearly, I was wearing a name tag that displayed that information on the face of the tag. She then went on to puff  my ego by telling me that she was a reader for Otto Penzler and that my stories had come close to making it into his (annual) Best American Mystery Stories anthology.That little tidbit of conversation kept me motivated for the next year with hope, and well, a lot more hope. I didn't know how close I'd come to getting a story into his anthology, but I did know none of my stories had made it into any of Otto's anthologies so far, plus I had never found my name listed in the Honorable Mention column of any of Otto's books.Verbally close, but no cigar. None the less, hope sprang anew, year after year.

In 2013, I was in lower Manhattan at The Mysterious Bookshop for a signing of The Mystery Box, MWA's anthology for that year. Since the third time's the charm, I'd finally gotten a short story into one of MWA's annual anthologies, and this was the one. Also, since Otto Penzler owns The Mysterious Bookshop where the book signing was, I got to meet the man, shake his hand and exchange a few quick words. Figured that just might be as close as I ever got to having any business dealings with the man. 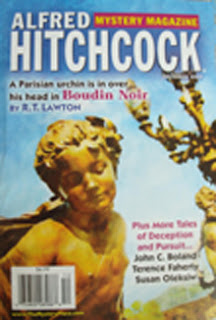 Then in June of this year, an unexpected e-mail slipped out of the ether and landed on my computer. My wife read it first (she generally gets up earlier in the summer) and called it to my attention. In short, Otto had sent an e-contract and was asking permission to include "Boudin Noir," one of the stories in my 1660's Paris Underworld series in his The Big Book of Rogues and Villains anthology scheduled for publication in 2017. Several years earlier, Alfred Hitchcock Mystery Magazine had paid me $480 to publish "Boudin Noir" in their December 2009 issue, and now here was Otto sending me a check in the amount of $250 for reprint rights. That made a total of $730 for just that one story. Amazing. Call it manna from heaven, found money, secondary market, or call it what you will, it was another ego booster.

Two items of business soon came to mind. One, how could I take advantage of this type of secondary market for other stories? Since the author has very little, if any, control over this type of market, I couldn't figure an angle. If you've got one, be sure to let me know. I'll buy you a drink at the next writers conference. And two, one of these years, I still might get a short story into Otto's annual Best American Mystery Stories anthology.