by Art Taylor
Two weeks ago, the date my last column appeared here, our four-year-old son Dash was on break from pre-school, and he and I took the afternoon train into DC to meet my wife for the National Gallery of Art's Jazz in the Garden series. (We gave Dash other options—a minor-league baseball game or seeing dinosaurs at the Smithsonian—but he loves music and being outdoors, and the choice was his.)

In addition to the train into the city, we traveled one Metro stop, and then had about a 15-minute walk to the Sculpture Garden. The Metro nearest the concert was Judiciary Square, and as we came up the escalator, I saw that we were at the National Law Enforcement Officers Memorial and that we could walk through the space en route to the concert. As with the Vietnam Veterans Memorial, this one features the names of men and women killed in the line of duty—more than 20,000 officers, in fact, with more names added each year. As we turned along one of the paths through the memorial, Dash spotted a man kneeling by the wall, paper and pencil in hand, and asked what he was doing. I explained that he was making a rubbing of one of the names, which prompted Dash to ask why. Since we were by then close enough that I thought the man may have heard him, I told Dash that we could ask him —encouraging Dash's curiosity, thinking of this as a teaching moment.

It was only immediately after I said this that I recognized we might be intruding, and in fact, when Dash asked the man what he was doing, there was a brief hesitation, and I was afraid I'd made a unfortunate mistake. But then the man showed the pieces of paper, several of them, where he'd rubbed a single name, and explained that name belonged to a friend of his, his partner in fact, and that he'd died. He took out his phone and pulled up photos of his friend, sharing them with Dash, pointing to other officers and their spouses and children. He explained that the rubbings were a way of remembering his partner, and he was planned to take the extra papers back to other people who'd known and loved him.

Dash was mostly attentive to the story, asked about people in the pictures. In what seemed to be a single motion, the man we were speaking with—I don't remember his name—pulled something from his pocket to give to Dash and asked me if we'd traveled here for a special visit to the memorial. I felt a moment of embarrassment then, since we were, as I said, simply passing through, all of this a chance encounter. Meanwhile, Dash—unembarrassed—eagerly started talking about the train ride and the jazz concert and Mama meeting us for a picnic and.... A teaching moment lost, clearly, that's what I thought, with my own self-consciousness further compounded by the item the man was handing to Dash: a challenge coin from the Las Vegas Police Department, the one pictured here in Dash's hand. 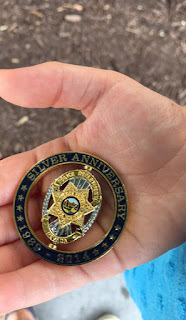 Dash was, as you might imagine, eager to have this coin—even as I was protesting that the gift wasn't necessary. But the man insisted, explaining how a challenge coin worked, how it was proof that you were a member of an organization, all of it a point of pride in so many ways. Dash, for his part, was proud too, proud to have the coin even if he clearly didn't entirely understand it.

I mentioned before that I don't remember the name of the man who spoke with us, but I do remember the name on the wall and on the rubbings: Alyn Beck. I looked him up later, looking for his story, thinking briefly that I might try to resurrect that teaching moment and tell Dash more about him, and was surprised—and saddened—to find that there's actually a Wikipedia article that discusses his death. On June 8, 2014, Beck and another officer, Igor Soldo, were having lunch at a CiCi's Pizza in Las Vegas when they were ambushed and killed by a married couple espousing anti-government views; after shooting the officers, the couple covered Beck's body in a "Don't Tread on Me" flag and a swastika and pinned a note to Soldo's body saying, "This is the beginning of the revolution." The shooting spree continued to Wal-Mart, where a third man was murdered before the couple themselves were killed—the man by police, the woman by her own hand. The links at the bottom of the Wikipedia article provide further and more extensive information about the killings, the couple, and their history of anti-government views and actions; for the story of the officers' murders in particular, here's this article from the Las Vegas Sun the day after the shooting. The officers are picture below in photos I borrowed from CNN. (Needless to say, I have not shared the rest of this story with Dash.)


As we left the memorial, Dash thanked the man for the coin and then insisted on holding it for the rest of our walk, despite my asking several times to carry it for him so he wouldn't drop it. Truth be told, he did drop it once as we were halfway across Pennsylvania Avenue, and he threw off my hand to duck back and grab it from the street, which prompted another teachable moment: Don't let go of Daddy's hand when you're crossing a busy street! (Exclamation mark then as well as now.)

Dash still didn't pay much attention to holding my hand, but he did hold onto the coin tighter after that—a new toy he didn't want to let go of, a prize of some kind that he was excited to show to Mama. I was already prepping to tell Tara the story here, what I knew of it then, and how the man's sharing his own story at the memorial had been cut short by Dash's enthusiasm about the train and the jazz concert and the picnic. But at the Sculpture Garden, Dash beat me to it—showing her the coin while I'd stepped away briefly to the concession stand.

"It was supposed to be a teaching moment," I started to explain when I got back, "but I think it all got lost."

"No it didn't," Tara said. "Dash told me all about it. The coin is from a man whose friend died and he misses him a lot and the coin is a way to remember him and to tell other people about him."

Some lesson learned for each of us, and now passed along.

In other news, we're now less than two weeks from Bouchercon—the biggest mystery event of the year and, as Judy Bobalik said, kind of a family reunion for us mystery readers and writers.

I'm looking forward to seeing so many people there and to seeing again and in other cases meeting for the first time some of my fellow SleuthSayers here.

My own schedule formally includes the following events—and between times hope to see others in all those in-between spaces: bars, and hallways, and breakfast lines and....

Before Bouchercon, however, another quick deadline. I'm debuting an author newsletter over the next week or so, and I'm hosting a giveaway of three volumes of Chesapeake Crime anthologies: This Job Is Murder, Homicidal Holidays, and Storm Warning, each featuring one of my stories. Subscribe to the newsletter before end of day on Sunday, Sept. 4, and you'll be entered for the book bundle—and for other giveaways ahead as well! You can subscribe here.
Posted by Art Taylor at 00:00