Requiem for a Fedora 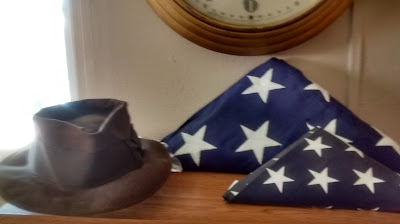 A good friend of mine made what will probably be its final passing from my life last week.

It was brown, beaten, dented and scuffed, frayed and holed.  It used to have a small spray of feathers sticking up from the bow round it's band, at the base of its crown.

But, now it lies in state atop a bookshelf, with our two hallowed flags, never to be worn again.

I've owned several hats in my lifetime, but only two fedoras.  One was black with a wide brim, but cheaply made.  The other was brown.

I bought the black one while in high school, and took it with me when I joined the army, wearing it all around Monterey, CA while stationed at the Presidio studying Arabic, then around Texas and Massachusetts while studying for my job in Military Intelligence, and finally around Clarksville TN, the gate town outside Fort Campbell, KY, where I met my wife when we were both part of the 101st Airborne Division (Air Assault)

As some of you know, when I left Ft. Campbell, I had only a couple of days to clear post in order to reach the SF Qualification Course on time. I had to take a plane, in Class A uniform, from Campbell to Ft. Bragg, so my black fedora made the trip to Smoke Bomb Hill crushed in the top of my duffel bag.   And there it stayed, until I finished Phase One out at Camp McKall four weeks later.

To celebrate passing Phase I, I checked into a hotel for the weekend, and bought an expensive fedora at the only shopping mall in Fayetteville, Ft. Bragg's gate town.

That was the brown one.  I liked that hat, but always felt the brim was just a touch too narrow.  However, it was of much higher quality than my cheap black one and better constructed,  It had a silk liner, a leather headband around the interior, a stitched edge around the rim of the brim, and its felt body was thicker and better formed, less brittle-feeling.  Its ribbon was thicker, too, taller that is, than the thin ribbon around the crown of my wide-brimmed black fedora.

I wore both those fedoras for many years.  Nearly every time I donned civilian clothes, while in the army.  They accompanied me on deployments to foreign countries (crushed, once more, into my duffel or ruck), and sometimes on field problems if I thought I could get away with wearing them in place of my patrol cap or boonie hat.

You could get away with a lot if you were in Special Forces back then.  And, if you had developed the requisite SF set of "eyes in the back of your head" when it came to gauging when the brass was about to come visiting.  My buddies were used to seeing me run the demolitions range while wearing a leather jacket under my BDU uniform smock, my fedora perched on my head, on cold nights.

These days, from what I've seen and heard, Special Operations Command has pretty much programmed that sort of "unmilitary behavior" right out of SF soldiers.  Which is a real shame for us all, in my opinion. Pulling off the successful Unconventional Warfare mission usually seems to require not only tactical and technical proficiency, but also more than just a modicum of brazen insanity, tempered by a surprising touch of optimism and whimsy.  If asked why this is so, I'd be at a loss to give you scientific reason, but would probably say, "It's like adding that 'Little Dab'll Do Ya' when working with explosives.  You calculate how many pounds of explosive you need, and where to place your charges, but then you always add that 'Little Dab'll Do Ya' or that bridge you're trying to blow will probably still be staring you in the eye after your charges go off.  Add that little dab, however, and down she comes.  I have no idea why this works; I only know that this is why working with explosives in an ART, not a SCIENCE."  And it's the same with UW operations.

But, enough of that diatribe.  We're here to remember a hat.  A fedora to be exact.  A good hat, if not a great one.  But, hey! who here is perfect?  That hat kept my head warm on cold nights, and shaded on hot days, in more geographic locations than I can properly remember.  My brown and black fedoras went everywhere I did, along with my leather jacket, for as long as I served.

After I popped smoke on the army, they came back home to Arizona with me, down to the blazing desert.  There, I wore them a bit less, but still they served me well.

The black fedora was too cheap to last long in the desert air, literally coming unglued while my oldest son played Indiana Jones one day.  But, the brown one stood the test of time.  In fact, I wore it quite a bit around the conference at Left Coast Crime in Phoenix earlier this year.

It served me as clothing and decor, as well as acting as costume and plaything for all three of my kids (a fedora makes a pretty mean Frisbee when needed).  Thus, I heard a catch in my daughter's voice, last week, when she called, "Patta!" from the laundry room adjoining the patio on our new house.

I found her standing there, before the washing machine, holding what looked like a soggy, thick paper towel spindle in both her petite hands.

It was my brown fedora, crushed into a tube shape. Soaking.  Crumpled.  Shrunken.

Somehow, it had gotten mixed in with the dirty clothes, and my wife had accidentally tossed it into the wash.

I'd seen the hat in bad shape before, so I punched the crown back up, pulled the hat back into shape, and pushed an approximation of the right dent into the top.

But, when I parked it on my head ... felt like I was wearing a yarmulke!

My hat had shrunk beyond recoverability. 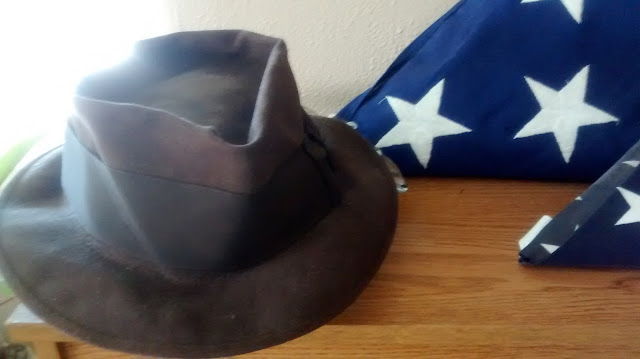