Someone once said that the essence of story is this: Drop your hero in a hole.

He* tries to get out. Or he dies trying. Or he resigns himself to life in the hole. You get the idea.

More recently, somebody - again, I don't know who - said the key to successful fiction is this: Put your hero in a hole. Then drop rocks on him.

In other words, get the character in a bad situation and keep making it worse.

All this came to mind because I just finished Tipping the Valet, a recent mystery by K.K. Beck. And she takes an approach to that basic formula that I don't recall seeing before. (If you can think of examples, stick 'em in the comments section.) 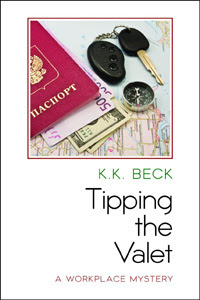 Here is the set-up for the novel: Tyler Benson is a young man working for a valet service in Seattle. He parks the cars at various fancy restaurants, and he's good at his job.

But on his first night in a new restaurant someone zooms by in a fast car and tries to assassinate Scott Duckworth, a software billionaire, injuring another valet in the process. And just to make things messier, Tyler's dad shows up drunk, hoping to run into his old pal Duckworth, who fired him years ago.

That may not sound like Tyler is in a very deep hole. More like a small dip in the road.

But here is what the reader knows and Tyler doesn't: A gang of Ukrainian car thieves is working with some of the other valets. There is a dead body, and Tyler's fingerprints are intimately associated with it. Plus the cops suspect Tyler's father of the attempted murder of the billionaire.

Pretty messy, huh? But here's what strikes me as unique: Beck has all these rocks piled up over Tyler's head but none of them have landed yet. The reader knows he is in deep doo-doo, but he thinks he's just suffering a minor inconvenence.

And that is a very cool form of suspense.

When the rocks tumble down, about one-third of the way through the book, they all strike at once, and Tyler finds he is in a very deep hole indeed.

But Beck - and the reader - are flying pretty high.

Getting back to the man in a hole theory, I say no. What you see below, two-minutes from the wonderful movie Microcosmos, is the essence of story. I saw it in a theatre and when our hero conquered, the audience went mad with cheers.

* I'm using masculine terms because the protagonist of the book I am going to talk about is a man.
Posted by Robert Lopresti at 00:00

That beetle reminds me Sisyphus, Rob. Only in his case he actually gets the rock up the hill. I haven't seen that movie, but I'll never look at insects the same again! And you've also got me intrigued about Beck's book.

Oh, yes, this is a very cool approach. I'm going to have to think to find an example myself--though I feel like one is there at the edge of my mind: a hapless somebody hardly aware of the kind of trouble ahead. Thanks for sharing!

The book sounds good but who knew the dung beetle was so inspiring,. And it is doing it all backwards, too!

My thought was the same as Paul's. Until I watched the dung beetle, I never realized Sisyphus could have had it a whole lot worse.

Microcosmos is an amazing movie, the bigger the screen the better. The love scene (two slugs) is worth he price of the rental.

I never thought I'd be rooting for a dung beetle, but this film clip made me do it. It's encouraging to see Sisyphus win for a change. (Then again, what's his reward for winning? Dung.)

Let's hear it for the dung beetle! And anyone else stuck in the s**t...

Rob, I’ve worked with a wide variety animals in various settings. Your mention of slugs reminds me that love-making isn’t strictly a human activity. Constrictors (snakes) for example, beautifully twine and intertwine for hours. Many animals groom their partners. Some mammals practice oral stimulation. Many, many vertebrates give love bites (‘inhibited bites’) around the neck. While rough sex can happen, many animals practice a gentleness that could put humans to shame. I haven’t seen the slugs scene, but I believe you.