by R.T. Lawton
In Rob Lopresti's 08/17/16 blog, "The Whole Truth," he wrote about doing the setup for a story, in this case, a novel. Rob's premise was to drop the protagonist in a hole, and if the author writing the novel so desired, then throw rocks at that particular character. Essentially, it was how to setup the beginning of an author's story and then move on into the action of the plot. I liked the concept. 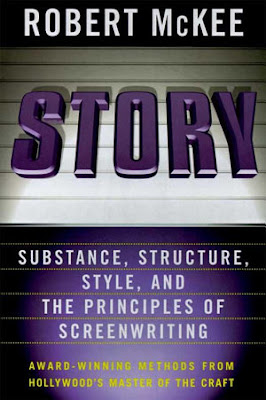 So today, to go with Rob's blog, here's two possible story endings as taken from the book, Story, by Robert McKee. These two endings are general category endings within which all other specific endings, such as happy endings, sad endings, ironic endings, etc., will fit.

The Closed Ending: The closed ending is mainly used with the traditional or classical designed story, the type of story written throughout the ages since Gilgamesh was first transcribed onto clay tablets. The fictional reality in this type of story is consistent and the conflict is mainly focused on the external causes, even though the protagonist may have an inner conflict to go with all the outside problems. In the story climax for the closed ending, the change is irreversible, there is no going back for the hero. As for the reader,, all questions raised in the story should be answered and all emotions satisfied.
(Some movie examples of closed ending from McKee's book are The Seven Samurai, The Hustler, A Fish Called Wanda and Thelma and Louise.)

The Open Ending: The open ending is generally used in a story focused on internal conflicts which is often prodded by external events. Here, the story climax leaves some questions unresolved for the reader, and thus some emotions may be left unsatisfied. The reader is then allowed (or left) to form his or her own conclusion as to what happened to the characters after the last word printed on the last page of the story. Different readers may come to different conclusions on the ending of the same story. For instance, one reader may believe the protagonist has now become mentally strong enough to overcome his situation and go on to a happy life. Another reader may have perceived an undercurrent of weakness and feels that the protagonist would fall back into old bad habits, thereby failing to succeed in the future. Same story; one reader an optimist, the other reader a pessimist; different conclusions on story ending.
(Some movie examples of open endings from McKee's book are Five Easy Pieces, Tender Mercies and A River Runs Through It.)

McKee's book Story is actually a screenwriting book by a screenwriting teacher, therefore it is written from a movie perspective, but to me, a story is a story regardless of the medium used to tell it. I believe it is wise to learn from other storytelling mediums to see what I can apply to my short story writing.

Most of my short stories use a closed ending. Much of that influence comes from the type of stories I've read over the decades since childhood. And, at this point, I will admit that the first few times I ran across an open ending story, I was prone to wonder where the heck the story ending was.

However, in the last couple of years, I've caught myself writing an open ending for one of the stories in my Shan Army series with the two half-brothers contending to see which one will become the heir to their warlord father's opium empire in the Golden Triangle of Southeast Asia, and in one story of my 1660's Paris Underworld series with the orphan, incompetent pickpocket trying to survive in a community of criminals. The open ending just seemed right for these two stories.