by John Floyd
NOTE: I'm pleased today to welcome Elizabeth Zelvin as a guest blogger. Liz is, she says, a semi-dormant SleuthSayer ("Like writers in general, we never retire"), and she's the author of the Bruce Kohler mystery series: five novels and five stories published, plus two additional stories accepted for publication. Her short stories have been nominated twice for the Derringer and three times for the Agatha Award. Other publications include two historical novels, two books of poetry, an album of original songs, and a book on gender and addictions. Liz lives in New York City and can be found online at http://elizabethzelvin.com, on Facebook at http://elizabethzelvin.com and on Amazon. Good to have you here, Liz!--John Floyd 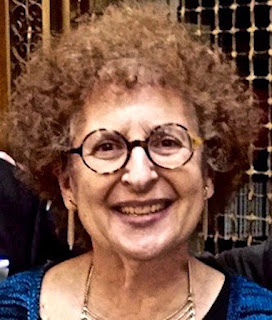 Having completed the first draft of a new short story and feeling mighty good about it, I got to thinking about my personal creative process, with which I've become fairly well acquainted over the years. I call myself an into-the-mist writer, because when I sit down to tell a story--we're talking fiction here, whether long or short--I can see only a little way ahead of me. I have to peer into the dimness to see my way, and what comes beyond the limited compass of my headlights is a mystery. In fact, it's an act of faith to trust that there's something there, and believe me, I have many moments of doubt.

The image that comes to me when I say the words "into the mist" is a drive I once took along the Blue Ridge Parkway on a foggy summer morning. My husband was with me, but he is a New Yorker born and bred who came to cars late in life, and at the time, I was still the family's only driver. There was supposed to be a scenic view of mountains off to the side, but we literally saw only the gray wedge in our low beams, which revealed swirls of mist, a hint of the winding road, and once a doe escorting a couple of fawns.

That's what writing the first draft of a story or a novel is like for me. I can see a glimpse of where I need to go next. I have a few ideas--like notes in a guide book--of features that may show up along the way ahead. But I'm never sure that I'll get where I'm supposed to be until I get there. When I do, there's no mistaking it. It's my destination, all right. I heave a big sigh of relief--and buckle down to the much easier business of killing my darlings and cleaning up the mess.

I've tried to write the other way: planning in advance, laying it all out neatly. It doesn't work. My creative process starts with my characters talking in my head. (Well, my husband says it starts with "I can't"--but after that.) Anyhow, I can't plan the jabber of those unruly characters. I'm not in the driver's seat. Bruce's wisecracks and Barbara's enthusiasm are a gift from the muse or whatever you want to call it. It happens, and it's the best feeling in the world. All I can do is make a beeline for my laptop or my Post-its or the voice recorder on my iPhone, whatever's handy, and start writing down what they say.

Once my characters start talking to each other, their conversation shapes the course of the narrative, even if I know in a general way where the story is going to end up. My series characters all have strong personalities, and it doesn't take much for them to start talking and acting exactly like themselves. The secondary characters in a particular story spring up as needed. They become my suspects and witnesses and law enforcement folks with their own personalities and ways of reacting to the situations I put them in and the characters they meet. They only come to life because I don't try to stuff them into some preset mold.

One of my favorite true stories from my historical novel about Columbus's voyage in 1493 is how one of the Spanish priests who accompanied the expedition went around Hispaniola collecting what he called folktales from the Taino, the indigenous people. When he got back to Spain, he published a collection of these tales. Like most authors, he was very proud of his book. These simple people have such charming folktales, he said. What a pity that they have no religion! The point, of course, is that the Taino were telling him about their religion all along.

That's kind of the way I feel when writers whose creative process involves outlining call writers like me "pantsers," a term that I consider demeaning. Who are they to dismiss my creative process as "flying by the seat of my pants"? It's my process, and believe me, there are no pants involved--no recklessness or lack of thought, merely an equally valid and effective way of summoning creativity, however different from theirs. So don't call me a pantser!