(Disclaimer– this is a political post. Not one advocating any one candidate, or point of view. It's more a prediction–based a look into America's past–of what may happen in the not too distant future.)

It's a wacky campaign season, full of surprises. The candidacy of Donald Trump has set one of our political parties in danger of cracking up. And it's not the one you think.

Yep. I'm talking about the Democrats.

How can I say that? After all, the Republican party is reeling, whereas the Democrats, the Liberal wing (recently revived from a long slumber by the insurgent candidacy of Senator Bernie Sanders) notwithstanding, seem relatively united.

I didn't say that I thought the Republicans would escape the current crisis unscathed. Merely that they wouldn't split.

Then again, it's tough for a rump party aging itself out of relevance to split, since it's already shrinking.

Why do I think this?

Because it's happened before.

And while the tale of the demise of the Whig Party, shattered on the shoals of the issue of slavery in the 1850s is the story you're likely more familiar with, I think the parallels between the crisis of the 1850s and our current chaotic campaign season are less exact than the crack-up that preceded it by three decades: just under two hundred years ago. 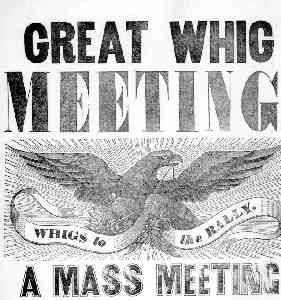 Hamilton soon died, killed in his famous duel with Jefferson's vice-president, Aaron Burr, but his followers continued on, becoming even less of a national presence with each passing election. By 1808 they found themselves reduced to carrying only New England, and frozen out of the presidency by the electoral popularity of Jefferson, and then of his hand-picked successor James Madison.

Even Madison's move to involve the nation in the disastrous War of 1812 did nothing to slow down the Jeffersonian electoral machine. It did, however, seal the fate of the "loyal opposition": the Federalist Party.

The Federalists opposed war with Great Britain largely because of the harm it would do to trade with the British (America conducted far more trade with Great Britain at the time than any other nation, including Napoleonic France). And the war was catastrophic for a New England economy that relied as heavily on trans-oceanic trade at the time as Seattle did Boeing in the 1970s.

So the Federalists did a very foolish thing. They gathered together at Hartford, Connecticut in late
1814 and had a convention, in which they adopted a position exploring seeking a "separate peace"with the British. The "convention" never took any action after the adoption of this resolution, because by January of 1815 news of the signing of a peace treaty (in Ghent in December of 1814) rendered their position moot.

But when word got out of Federalist intentions, they were tarred as traitors and any pretensions of being a national party were snuffed out.

When Madison's second term of office ended in 1816, his chosen successor James Monroe ran for office virtually unopposed. And he ran for reelection in 1820 literally unopposed. The "Republicans" had triumphed.

The problem, of course, is that single-party rule in a republic is a dicey thing. It is human nature to abhor a lack of liberty and to crave alternatives to even the most sensible of choices. A two party system, for all of its flaws, suits this impulse among the electorate far better than even the most efficient single ruling party.

And the Republicans of Monroe's era were hardly that.

In addition the first true economic depression in the nation's history (the "Panic of 1819") and
differences of opinion on matters such as the admission of new states into the union (which was really a shadow argument for and against the expansion of slavery) and other sectional concerns raised their troublesome heads. So the Republicans found themselves riven by dissension. Not surprisingly they broke up into two groups: one more liberal (at least where white males were concerned), the "Democrats" and the other more conservative, backed by the bankers and the monied/middle classes: calling themselves "National Republicans," they were soon better known as "Whigs."

And while the party's agonies might stoke a certain amount of schadenfreude among Democrats, I don't know anyone who is actively rooting for the demise of the Republican Party. And I say, "Good." And furthermore I fervently hope for the rebound of the Republican Party, the party of Reagan, as a principled repository for conservative political thought and action.

Because if the Republicans don't bounce back, it's highly likely that we will witness a split of the Democratic Party, with the "conservative" (moderate) wing of the party coalescing around so-called "Wall Street Democrats" and the "liberal" wing around the likes of Senator Elizabeth Warren of Massachusetts.

After all, "ex" Republicans have to go somewhere. If history is an indicator, they're likely to gravitate to the existing opposition party and help by sheer numbers make its "moderate" wing more conservative.

Only time will tell. Either way it promises to continue to be an interesting election (in a Chinese curse kind of way).
Posted by DoolinDalton at 01:44