A few weeks ago, I did a SleuthSayers column called "Crime (and Other) Scenes," in which I listed some of my favorite movie moments. In the readers' comments that followed that piece, my friend Mary Ann Joyce mentioned the fact that I should do a piece on famous actors' early appearances, sort of an answer to the question "When did you first realize the person on the screen was going to be a star?"

Never let it be said that I cannot take advice given by the readers of our blog--especially when it sounds like fun. And though I've never known that anyone "was going to be a star," I have put together a list of some of the actors/actresses I've seen in movies that were made before their names and faces became immediately recognizable. These aren't necessarily debut performances; they're just roles that I happened to notice during the re-watching (I do a lot of re-watching) of movies I first saw long ago. Even now, I turn to my wife occasionally and point and say, "Look! You know who that IS?"--after which she usually gives me an eye-roll and goes back to doing something productive.

Some of the roles I've listed below are no more than bit parts that you'd miss if you blinked (they'd be called "cameos" if the actors were well-known), and some are too familiar even to include in the list, like Ron Howard in The Music Man or Natalie Wood in Miracle on 34th Street. Long or short, though, and memorable or not, I think those appearances are fun to watch. Here are a few of the sightings I remember most:

Tommy Lee Jones as a college student in Love Story (1970). It's been said that author Erich Segal based Ryan O'Neal's character on two roommates he knew while attending Harvard: Jones and Al Gore. Is that true? Who knows--but it sounds good.

Viggo Mortensen as one of the Amish farmers in Witness (1985). In one of my re-viewings of this movie I saw him in several of the crowd scenes and realized that his was a familiar face, but it took an IMDB search to turn the lights on.

James Gandolfini as one of Christopher Walken's henchmen in True Romance (1993). He looked suitably Sopranoish even back then. Kirstie Alley as a skinny and gorgeous rookie crew member on Star Trek II: The Wrath of Khan (1982). I remember Shatner telling her wisely, "You have to learn WHY things work, on a starship." So she could tend bar at Cheers, I guess, a few years later.

Jeff Goldblum and Denzel Washington as thugs in Death Wish (1974). They were onscreen at different times, and not for long. The thug mortality rate was unusually high in this film.

Harrison Ford as one of the drivers cruising the strip in American Graffiti (1973). Get in, but don't sit on the Wookiee.

Ray Liotta as Melanie Griffith's creepy ex-boyfriend in Something Wild (1986). Jeff Daniels was the current boyfriend.

Anthony Edwards as Tom Cruise's best bud in Top Gun (1986).  This was before Goose went to medical school and became Mark Greene on ER. Meg Ryan was even on hand, as his wife.

Frances McDormand as a young wife doing battle with a hired killer in Blood Simple (1984).

Ethan Hawke as one of Robin Williams's devoted students in Dead Peets' Society (1989).

Clint Eastwood as a lab technician in Revenge of the Creature (1955). This was even before Rawhide went ahead and made his day.

Keifer Sutherland as the two-bit hood in Stand by Me (1986). Backstory, maybe, for Jack Bauer?

Robert Duvall as a cab driver in Bullitt (1968) (and of course as Boo Radley in TKaM).

Tom Cruise as the hero's friend in an endless movie called Endless Love (1981).

Matt Damon as a teenager in Mystic Pizza (1988). I think he had one line of dialogue.

Philip Seymour Hoffman as a prep-school student in Scent of a Woman (1992). He also looked really young in Twister, four years later.

Bill Paxton as one of several punks who pester (and wish they hadn't) Ahhnold in The Terminator (1984).

Johnny Depp as the ill-fated translator, Lerner, in Platoon (1986). Scarlett Johansson as a disabled thirteen-year-old in The Horse Whisperer (1998).

Amy Adams as Leo DiCaprio's love interest in Catch Me If You Can (2002). Elizabeth Banks was in there, too.

Daniel Craig as Kate Winslet's love interest in A Kid in King Arthur's Court (1995). His name in the movie was Kane, Master Kane.

Tom Hardy as a soldier in Blackhawk Down (2001). His combat training would pay off later, on Fury Road.

Elijah Wood as an eight-year-old playing a game in a video arcade in Back to the Future II (1989). Probably looking for Gandalf.

Season Hubley as the girl her then-husband Kurt Russell runs into in Chock Full o' Nuts, in Escape from New York (1981).

Ryan Gosling as a football player in Remember the Titans (2000). I do, but only barely. 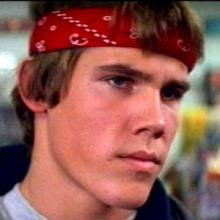 Jack Lord as Bond's pal Felix Leiter in Dr. No (1962). Jack later went to Hawaii to chase other villains with funny names, like Wo Fat.

Raymond Burr as the spied-upon murderer in Rear Window (1954). This wasn't really an early role--it was just surprising to see Perry Mason as a bad guy.

Kevin Costner as the dead friend whose funeral brought the old gang back together in The Big Chill (1983). Reportedly, his flashback scenes were all cut, so he appeared onscreen for only a few seconds, as a corpse.

Robert Redford as a prison escapee being chased in The Chase (1966). Butch, who are those guys?

Brad Pitt as the hitchhiking cowboy in Thelma and Louise (1991). Thanks, Earl Staggs, for reminding me of this one.

James Coburn and George Kennedy, as low-level criminals in Charade (1963).

My friend and fellow Criminal Briefer Melodie Johnson Howe, as the lady in the bathroom love scene with Clint Eastwood in Coogan's Bluff (1968).

Okay, faithful movie addicts, who are some actors and actresses you've spotted in the early days, before they attained fame and fortune? How many did I miss? Are there any you remember seeing and didn't recognize? Did you think, at the time, that they were destined for greater things? Do you ever find yourself watching for appearances like this, especially in the really old movies? Do you have more important things to do? (I'm a lost cause, but there might be hope for the rest of you.) 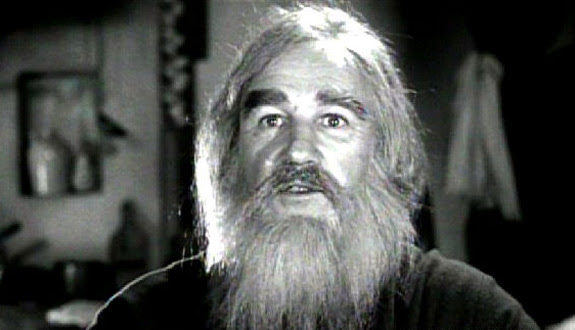 Back to the subject: As Mary Ann suggested in that SS comment, I've put All About Eve into my Netflx queue so I can check out a younger Marilyn Monroe. Ah, the sacrifices I make.

One last thing: I've heard that George Clooney played a slasher victim in Return to Horror High, that Joseph Gordon-Levitt was an eleven-year-old kid in A River Runs Through It, that Jack Black was Sean Penn's brother in Dead Man Walking, and that Robert DeNiro showed up as an uncredited diner in a restaurant in Three Rooms in Manhattan--but I think I might pass on those. Besides, I saw River and DMW in theatres before I even knew who Joseph Gordon-Levitt and Jack Black were, and watching them again doesn't sound all that thrilling.

Maybe there's hope for me yet.