by Art Taylor
Dashiell Hammett created several of the best-known, most iconic characters in crime fiction: Sam Spade in The Maltese Falcon, Ned Beaumont in The Glass Key, and Nick and Nora Charles in The Thin Man. But many of his short stories (mostly published in Black Mask) and his first two novels—Red Harvest and The Dain Curse—focused on another character: the Continental Op, an unnamed detective with the Continental Detective Agency. The character and the agency were both drawn from Hammett’s own career with the Pinkerton’s, and Nathan Ward’s recent book The Lost Detective: Becoming Dashiell Hammett has successfully argued that Hammett’s Pinkerton training informed not only the character and conflicts of these stories but also the style: “His Continental Op stories clearly evolved from the form of these Pinkerton reports,” Ward writes, citing those reports particularly for their “habits of observation, the light touch and nonjudgement while writing studiously about lowlifes.” 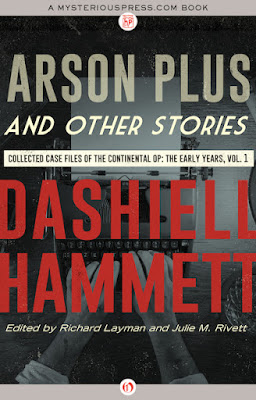 On Tuesday, June 14, Open Road Media and MysteriousPress.com will release eight e-books toward what will eventually become the complete Collected Case Files of the Continental Op, edited and presented by Hammett’s biographer Richard Layman and his granddaughter Julie M. Rivett. As Rivett notes in her foreword, the series marks “the first electronic publication of Dashiell Hammett’s collected Continental Op stories to be licensed either by Hammett or his estate—and the first English-language collection of any kind to include all twenty-eight of the Op’s standalone stories.” Additionally, the complete series will include the never-before-published “Three Dimes,” a fragment of an Op story from the Hammett archive.

Rivett and Layman have worked together on many projects, including The Hunter and Other Stories, Return of the Thin Man, The Selected Letters of Dashiell Hammett: 1921-1960, and Dashiell Hammett: A Daughter Remembers. Rivett speaks widely about her grandfather’s work and legacy, and I’m honored to welcome her to SleuthSayers to discuss this landmark project.

ART TAYLOR: Hammett’s characters Sam Spade and Nick and Nora Charles have surely entered the wider cultural consciousness more completely, but the Continental Op might arguably be the more seminal character in terms of the development of the genre. What do the Op and his stories offer crime fiction readers that The Maltese Falcon, for example, doesn’t?

JULIE M. RIVETT: The Op is important and, yes, seminal.  Ellery Queen said he could have been Sam Spade’s older brother, equally hardbitten, but with perhaps less spectacular presentation. The Op’s narratives are workmanlike, realistic, and procedurally detailed. His plainspoken wit is at least as dry as Spade’s. It’s a shame he’s not memorialized in film the way that Sam and Nick and Nora are. I think that’s the main reason the Op is less well known to contemporary readers.

One of other the big differences between the Op and Spade, Nick, and Ned Beaumont is that he’s a company man, on the payroll for the Continental Detective Agency, modeled on Pinkerton’s National Detective Agency, where my grandfather worked for some five years, off and on. Spade and Nick Charles are independent sleuths. Ned Beaumont functions as a detective, but in fact he’s a political operator inadvertently entangled in a murder. Professional standpoint makes a difference in how each one perceives his professional obligations. The Op is the only one who has to answer to a boss, the Old Man.  He fudges his reports at times to cover up some less than conventional tactics, but, still, he’s loyal to the Agency and he loves his job. Or he is his job. That idea of profession as identity runs all through my grandfather’s work. The Op tales offer an extended narration of workaday professionalism in action.

Several collections in recent years have featured Continental Op stories, notably 1999’s Nightmare Town and then more extensively the Library of America’s Crime Stories & Other Writings in 2001, but this is the first time all of the standalone Op stories have been gathered together in series form. What might readers learn about the Op or about Hammett—and what did you yourself take away—from reading these complete case files, finally gathered in chronological order?

Any careful reader will see the progression in Hammett’s work. The stories grow longer and more fluid, the Op more emotionally vulnerable, the resolutions keyed more to justice than law. There’s evidence of both character and story development. Rick does a good job in his introductions of describing shifts in the degrees of violence that take place under Hammett’s three editors at Black Mask—very little under George W. Sutton, with scanty gunplay; much more under Philip C. Cody, the Op tempted to go blood simple; and ample well-developed action under Joseph Thompson Shaw, purposeful as well as thrilling. 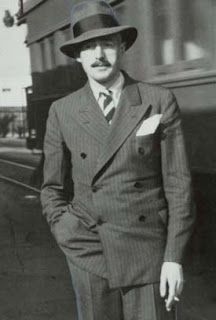 I’m drawn to that biographical potential of the collection, of course. The complete run of stories offers a fascinating opportunity to contextualize the Op’s narratives within Hammett’s real life story. My grandfather starts with a novice’s attention his editors’ demands—thrilled to be published, but also intent on keeping food on the family table. He hits his stride with some great stories, but then there’s a break, when he walks away in anger, deciding to give up on fiction. Then he’s back, with stories more confident, complicated, and ambitious. He’d realized his talents and was ready (with Joseph Shaw’s support) to challenge pulp- and crime-fiction norms. And then the sea change in February of 1930—the final Op story published in Black Mask, the same month that The Maltese Falcon was released by in hardback by Knopf. With that, my grandfather was done with the Op and off to explore other possibilities.

A few of the Op stories have been elusive except in much older editions—“It” and “Death and Company,” specifically. Why have those not been republished more recently, and do you anticipate they will be among the standout gems here for readers who are already fans?

The Op’s publishing history is complex—even frustrating. I don’t know why those two stories have been overlooked for so long. There is a gruesome tinge to each, but nothing sufficient to repel Hammett readers. I certainly can’t explain Lillian Hellman’s choices while she controlled the estate or the decisions made by her former trustees after her death.  I do know that contracts let under their tenure made the publication of Complete Case Files extraordinarily difficult. It seemed ridiculous to me that the Op’s tales couldn’t be collected altogether! Rick and I are both current trustees for Hammett’s literary property trust (under Hellman’s will, no less) and even with that, it was a struggle to assemble all the pieces. We’re hugely pleased and proud of that we were, finally, able to bring together the Op’s complete short-story canon.

“It” and “Death and Company” were last available, alongside many other Op stories, in paperbacks edited by Ellery Queen between the early 1940s and early ’50s [the cover to one of those paperbacks can be seen at left]—but you note that the stories in those editions were presented in  “sometimes liberally re-edited form.” [Editorial note: Don Herron at “Up and Down These Mean Streets” has been less diplomatic, using the word “butchered,” and Terry Zobeck has meticulously charted the editorial changes to “Death and Company” here.] In the newly collected case files, do you and Layman restore these and other stories to their original form?

Yes, absolutely! Rick and I worked from copies of the original publications for each story—26 in Black Mask, and one each in True Detective Stories and Mystery Stories magazines. Our only changes are corrections to obvious typos—which were more common than you might imagine, especially in the earlier editions of Black Mask. The proofreading was grueling. But we wanted to stick as close to Hammett’s originals as possible and when in doubt, we left questionable text unaltered. Unlike Ellery Queen, our first principle was “do no harm.”

Does each of the eight volumes feature its own individual introductions by you and Richard Layman?

Here’s how the organization works. Two or three stories are clustered into each volume. Then the volumes are collected into three sections: the Early, Middle, and Later Years.  Rick wrote introductions for each of the three sections based on Hammett’s experiences under his three editors at Black Mask, George W. Sutton, Philip Cody, and Joseph Thompson Shaw. A Sutton, Cody, or Shaw introduction opens each volume, as appropriate. My foreword traces the publishing and cultural history of the Op from creation through this most recent publication.  Every volume opens with the same foreword. A separate headnote introduces the never-before-published Op fragment, “Three Dimes.”

Rick and I have worked together since 1999 and this is our fifth published collaboration. We’ve learned to divvy up the editorial tasks. Each book has had its own rewards and challenges. In this case, in addition to constraints imposed by previous contracts, we’re negotiating the relatively new world of e-publication.  It’s complicated. For now, we’re releasing eight volumes, which include 23 stories. We hope to release the remaining handful and the fragment later this year.

“Three Dimes” promised to be a real highlight of the collection here. What more can you tell us about it?

The fragment comes from Hammett’s archive at the University of Texas at Austin. It is unique—a 1,367-word partial draft, in the classic Op style, that leaves us wondering what would have happened next and why the story was set aside unfinished. My grandfather, who saved very little, saved this, along with chapter and character notes, which will be included. I think that rare glimpse of Hammett’s process is going to be a real thrill for fans. Watch for it!

Find out more about the Complete Continental Op here at Open Road Media.
Posted by Art Taylor at 00:00