That's a Mystery to ME


by John Floyd
There are several questions that always seem to come up, at conferences, classes, meetings, signings, and wherever else writers get together with readers or other writers. You know the ones I mean. Should fiction be outlined? Do you edit as you go? Which is more important, plot or character? Where do you get your ideas? Do you assign yourself a page/word quota? Do you write in a certain location, or at a certain time of day?

And one that I hear really often: What, exactly, IS a mystery?

What is it indeed? Does it have to be a whodunit? Must it include a murder? Must it always feature a detective? It's one of those arguments that could be called, well, mysterious.

To me, the answer is clear. I agree with Otto Penzler, the man who founded Mysterious Press, owns the Mysterious Bookshop in Manhattan, and has for the past nineteen years edited the annual Best American Mystery Stories anthology. Otto says, in every introduction to B.A.M.S., that he considers a mystery to be "any work of fiction in which a crime, or the threat of a crime, is central to the theme or the plot."

NOTE: In looking over the Amazon reviews for The Best American Mystery Stories 2015, I notice that several reviewers said they didn't like it because it included stories that weren't mysteries. My response would be that they didn't read the intro. It doesn't leave much room for doubt.

Why is such a definition important? Does it even matter? I think it does. It's important because writers need to know what they've written in order to know where to submit it. If a magazine (or anthology) editor or a book publisher or agent says he or she is looking for mystery stories/novels, then you/I/we need to know what to send and what not to send. And, again, Otto's definition seems logical. I think mysteries can be whodunits, howdunits, whydunits, etc. (Much has been said at this blog recently about the TV series Columbo, and while I think all of us would classify those episodes as mysteries, none of them were whodunits. All were howcatchems.)

Consider this: If a character spends an entire story or novel trying to murder someone and is stopped just before doing it (The Day of the Jackal, maybe?) does that story or novel fall into the mystery category? Sure it does. A crime--the threat of a crime, in this case--is central to the plot. And I can think of a few mysteries aired on Alfred Hitchcock Presents that didn't even involve a crime. One example is Man From the South, featuring Steve McQueen and adapted from the short story of the same name by Roald Dahl, and another is Breakdown, starring Joseph Cotten as a paralyzed accident victim whose rescuers believe he's dead. Some of you might've seen those, and if you did you'll remember that they were more suspenseful than mysterious. 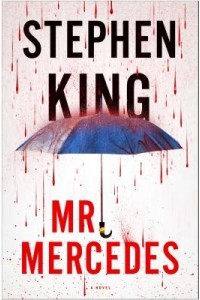 Another thing that always seems to surface in a discussion like this is the fact that some literary authors and publishers look down their noses at the mystery genre and mystery writers. At least two successful crime writers have told me there are certain upscale independent bookstores that aren't terribly receptive to having them come there to sign. The store owners allow it, because--uppity or not--bookstores must make a profit, and successful genre authors usually sell more books than successful literary authors. But there's still a bias. It's been said that Stephen King was for years accused of writing nothing but commercial/popular/genre fiction, until the publication of "The Man in the Black Suit" in The New Yorker and his pseudo-literary novel Bag of Bones. After that, critics began acknowledging that his work is occasionally (in their words) meaningful and profound.

To get back to the subject of this column, though, I also find it interesting that King, who is of course best known for horror fiction, won a well-deserved Edgar Award last year for the novel Mr. Mercedes and another Edgar this year for his short story "Obits." Neither of them fit into some folks' idea of a mystery. The novel was more of a suspense/thriller, and "Obits" was firmly entombed in the spooky/otherwordly/paranormal category. My point is that the Edgar is awarded by Mystery Writers of America, and that in itself means those two works should be considered to be--among other things--mysteries.

I remember something Rob Lopresti said to me years ago, on this "what is a mystery?" topic. He said "Definitions tend to be more useful for starting arguments that for ending them." In fact, with all this talk of which cubbyhole to put what in, I'm reminded of a poem I once wrote (and sold, believe it or not), called "A Short Career." Like all my poetry, it tends to be more silly than useful, but I think this one happens to (accidentally) illustrate a point:

Eddie knew that a detective wears an
Overcoat and hat,
But he lost his pipe and magnifying
Glass, so that was that.

What Eddie didn't understand is that very few things in this life are simple and elementary, my dear Watson. Sometimes the prettiest colors are those that are blended, or at least mixed-and-matched. I think mystery is a broad category, and--IMHO--hybrids are welcome.

It's probably worth mentioning that Elmore Leonard--who was once recognized as a Grand Master by Mystery Writers of America--was always quick to point out that he'd never in his life written a traditional mystery. His stories and novels were about crime and deception, not detection. Even so, the best place to find his work is in the MYSTERY section of the bookstore.

What's your take, on this particular argument? Do you think books and stories that lean more toward "suspense" or "thriller" should always be so labeled, or at least identified as a subgenre of "mystery"? Or do you agree that the inclusion of a crime qualifies any such story to be called a mystery?

Investigative minds want to know.
Posted by John Floyd at 00:01