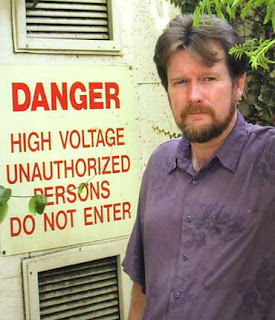 For today's blog entry I conducted an interview with long-time friend, BOSCH consulting producer Terrill Lee Lankford. The author of several first-rate novels, including EARTHQUAKE WEATHER, BLONDE LIGHTNING, and SHOOTERS, Lankford also sports a lengthy track record in the film industry, with credits doing everything from directing to screenwriting, to production.

Thanks for agreeing to do this interview, Lee. Readers may be familiar with your fiction, especially SHOOTERS and EARTHQUAKE WEATHER, but it seems as if most of your time is currently taken up by your work as a consulting producer and occasional screenwriter on the Amazon series BOSCH, an adaptation of Michael Connelly's series of books featuring LAPD homicide detective Hieronymus "Harry" Bosch. Now, you've had a foot in both mystery writing and film work for a while. How did that come about?
I started out in the movie business in the 80s. I wrote, produced, directed or doctored about 25 movies starting in 1983. I decided to try my hand at novels in the early 90s. Then I started working with Michael Connelly on a wide variety of projects and when the Bosch series came up I became a part of that as well.
Tell us about the gig with BOSCH. Anyone who's followed Michael Connelly's work over the past decade or so is likely familiar with the web trailers and interviews he's done in support of each book as they have come out. Some might not know that you've been the man behind the camera on most of those.  Can you tell us about  this working relationship, and how it helped lead to your current gig?
Mike and I became friends on the book circuit. Since I had a filmmaking background I became his go-to guy when his publisher decided to do some film promotion for his books. It really started with a promo idea which was to do a short documentary on his early books, but it grew out of control and the next thing you know we had a feature length doc with both Mike and William Petersen providing narration. This was BLUE NEON NIGHT. Little, Brown pressed 75,000 copies of the video and gave them away with the hard cover edition of THE NARROWS. After that we did a series of video promotion. I shot promo stills for him also, some of which became author photos. We wrote a couple of screenplays together and then when Bosch went to series I came along for the ride.
That reference to BLUE NEON NIGHT reminds me that the look and feel of Los Angeles at night is a major part of the series. Tell me about the lighting design setting the tone and mood. Especially the night shots of L.A.
We have great cinematographers on our show. Patrick Cady bleeds noir and his co-cinematographers work closely with him to give the show a consistent feel and look. Personally, I love it!
I recall you once telling me you thought we would never see Harry Bosch in film, in part because of reservations Michael had with how Hollywood might treat the character and the stories. And yet here we are with a *superb* second season just out, and Titus Welliver (probably best known for his previous roles as DEADWOOD's Silas Adams and the Man in Black on LOST) really inhabiting the role. How did this come to pass?
The rights were tangled up with Paramount for almost 20 years. And they really 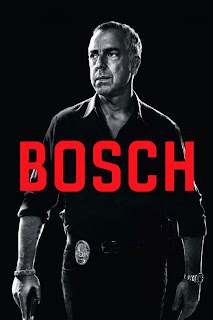 screwed the pooch in development. They spent a lot of money and never got anywhere. I always wanted them to try to do what Stephen King did once in awhile - make one of the books into a 4 or 6 hour miniseries for network TV. But features were the name of the game back then. TV and streaming evolved and it became easier to make a quality show that did not have to go through the gauntlet of Network TV, which grinds most good things to a pulp during the process. Mike was approached by a producer who was a super fan of the Bosch books and that got the process started. Because of a very minor glitch in his ancient contract with Paramount he had to pay them a bloody fortune to completely clear all the rights issues up. But it’s been worth it in the long run. He has a lot of control of the show and he’s very happy with how it is turning out.

For a fan like me one of the big selling points of the series is how faithful it is to the books, without being slavishly tied to the plots laid out in them. Was that a big selling point for going with Amazon to produce this series?
That was a key factor. There are people at Amazon who are major Connelly fans. They didn’t just want the name. They wanted the heart of the material. And Mike wanted to have a big hand in making the show. They’ve given him that and in return he’s given them pure Bosch. It couldn’t have happened this way without his involvement.
I am admittedly a fan of both the books and the TV series, but I have to say, while I loved what you guys did with Bosch's character in season one, I really feel like this show has hit its stride with season two, in no small part due to the expanded roles of the supporting cast. It's such great fun to get to see great actors like Jamie Hector (Marlo on THE WIRE), Amy Aquino and Lance Riddick (another WIRE alumnus) get to work. Was this a conscious decision, with having established Bosch's character in season one, to get the supporting cast more involved, with other story lines and subplots involving them, etc.?
We knew we had a fantastic supporting cast and felt like we might have underused them a bit in the first season. We also realized we were burning Titus out with the schedule so we wanted to find a way that he could get some days off to recharge his battery. I think we found a good balance this season. We got a better show and Titus got a few naps.
Anyone who has read the books knows that the defining relationship in Bosch's life was the one he had with the mother who was murdered when he was still a boy. Not surprisingly he seems to be frequently drawn to women who are not what they seem to be, and sometimes has difficulty (at least initially) reading the women in his life as an adult. Is it any wonder then that he married Eleanor Wish, the F.B.I. profiler turned professional poker player, and easily the most enigmatic and hard to read of the women he was involved with in any of the novels? That said, I was interested to see who you were going to cast in the pivotal and difficult role of Eleanor Wish in the series. You seem to have hit it out of the park with Sarah Clarke. How did that happen? Was she someone on your collective radar from the beginning, or did she just nail the audition, something like that?
I had nothing to do with her casting. That was other people. I know Mike had liked her from a lot of previous work, like 24. I think she came in from her agency with a lot of other candidates, but I think she went to the top of the list pretty quickly. She was the first and only offer they made.

Did you have the always underrated Jeri Ryan in mind for femme fatale Veronica Allen all along?
Michael saw her in a little seen SyFy show called Helix. She played a tough and corrupt boss of a pharmaceutical company. He saw in those qualities what they were looking for in Veronica Allen and asked the casting agents to reach out to her. She was very interested because while similar to the Helix role, Veronica is more of a classic femme fatale and she wanted to play that. She signed up.
Annie Wersching's character Julia Brasher, such a big part of Season One, has a cameo in this season. Does that mean we can expect to see more of her in future episodes, or was that a throw-in?
It’s always possible. We like to say that if we don’t kill a character there is always a chance that character could come back.
I mentioned before that we see an awful lot of WIRE alumni (Jamie Hector, Lance Riddick), in this cast. Was that conscious, or just a happy accident?

THE WIRE had one of the greatest casts ever. Many shows are populated by them now. We are but one.
There seems to be an uptick in TV showrunners/producers who keep hands in both the print and screen worlds. Among others, there's Phoef Sutton and his ultra-tight thrillers, Nic Pizzolatto of TRUE DETECTIVE wrote a novel a few years ago, and now Noah Hawley ("FARGO) is coming out with "BEFORE THE FALL, a well-reviewed suspense-thriller with a lot of buzz. Are there ways in which writing for anthologized television has made you — or is making you — a better author of novels?
I don’t write novels anymore. But if I did I hope the experience would have made me better, not worse. Anything is possible though. 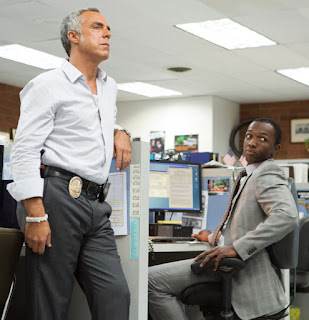 I would imagine a lot of people trying to write novels look at great crime TV — BOSCH, BREAKING BAD, DEXTER, BLOODLINE, TRUE DETECTIVE, BETTER CALL SAUL, etc. — and think, "Damn, this writing is SO good. I want to take what's good about what I'm seeing and have it inform my writing." What advice would you give writers who are studying all these great series and looking to catch a little of that magic for themselves? What can the best of the current shows teach us in terms of story and prose craft? About what to do and what NOT to do?
I’d tell people to write what they want to write and not focus what others are doing to find their own path. But no one would listen to that.
Serialized TV/Streaming is very similar to novels now in many ways. With all the same potential weaknesses and strengths. You have the room to tell a long story on TV/Streaming, but this can also lead to a need for padding if your story can’t handle 10-13 hours. Often a 500 page book would have been better at 300 pages. Or vice versa. Your story and characters have an optimum length. It’s up to you to discover what it is and neither shortchange it nor drag it out.
What is your favorite storyline and why?
Do you mean of the ones we have already shot? Probably Harry and his daughter’s quest for the perfect L.A. milkshake.
And lastly, what can we look forward to in season 3 (And will we see any more of Mimi Rogers as "Money" Chandler?)?
I think seeing more of “Money” is a safe bet. I can’t tell you much more than that but the books being adapted are The Black Echo and A Darkness More than Night. People will have to read those if they want the inside track.
Thanks for your time, Lee. Can't wait for Season Three of BOSCH! 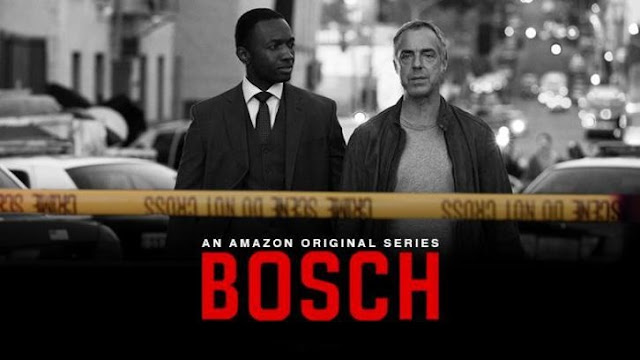 Posted by DoolinDalton at 01:39