The Man With the Golden Typewriter


A couple weeks ago I did something unusual: I chose to ignore all the novels and short-story magazines in my towering to-be-read stack and bought a book of nonfiction. Or maybe not that unusual, since this was the third time this year that I've delved into NF. But the first two books were In the Heart of the Sea by Nathaniel Philbrick and Cities of Gold by Douglas Preston, and I knew before reading those that I would enjoy them because they were true-life adventure stories, sort of like Unbroken and The Perfect Storm. I had doubts about this one.

The book turned out to be a good choice. It's called The Man With the Golden Typewriter, a 400-page collection of letters from and to Ian Fleming. The letters begin in 1952, when he started work on his first book, and continue until his death in 1964, at the age of 56. During that time he wrote two works of nonfiction, a three-volume children's story, twelve James Bond novels, and two collections of Bond short stories. All the Bond books were created at Goldeneye, Fleming's vacation home in Jamaica. The letters, compiled by his nephew Fergus Fleming, provide a fascinating look into the working life and the personal life of a bestselling author at the peak of his success.

To me, the most interesting of the letters were those to and from his publisher, Jonathan Cape of London, and the editors and agents who worked with him on the novels. Other exchanges included those with readers and fans; with friends like Somerset Maugham, Noel Coward, and Raymond Chandler; and with film producers Cubby Broccoli and Harry Saltzman. Here are some excerpts:

"In the course of the innumerable editions of Casino Royale which will now, I presume, flow from your presses, could you please correct a rather attractive misprint on page 90, line 13, and make the 'Ace of Spaces' into the 'Ace of Spades'?"

"It is an unashamed thriller, and its only merit is that it makes no demands on the mind of the reader."

"Dear Ian . . . I have been through it [Moonraker] with minute care and a pencil & have applied both to your punctuation and spelling . . . you have a tendency, as the climax approaches, to increase the strain on the reader's credulity . . . Not pleased with the title. I should like Hell Is Here . . . I think you should be careful about letting your characters grunt, bark, and snarl too freely."

"I am very sad that you will not be in Goldeneye next winter . . . I have little hope of getting out to Los Angeles this year. I was there in November and I have absolutely no excuse for another holiday unless Hollywood decides to film one of my books."

To Michael Howard (who'd just designed the cover for Diamonds Are Forever), February 14, 1956:

"Forgive the tropic scrawl. I am sitting in the shade gazing out across the Caribbean & it is heroic that I am writing at all."

"Dear Ray . . . You after all write novels of suspense--if not sociological studies--whereas my books are straight pillow fantasies of the bang-bang kiss-kiss variety."

From editor Daniel George, regarding From Russia With Love, June 7, 1956: 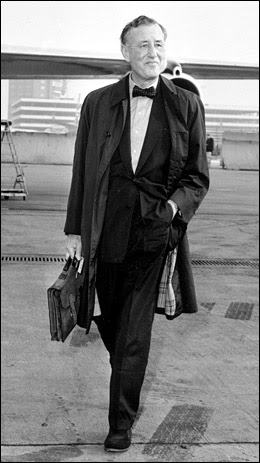 "Similes should be used only when they are helpful . . . in the first chapter . . . you say the man's eyelids twitched suddenly like the ears of a horse. Up to that moment I'd visualized the scene perfectly. You destroyed my illusion by bringing in a horse . . ."

"Your quick eye has missed one grievous error [in From Russia With Love] pointed out by another train enthusiast. I gave the Orient Express hydraulic brakes instead of vacuum."

"My dear Ian, I have just finished Goldfinger, and it stuck to me like a limpet, or limpet-mine . . . I found the tension of the [golf] game tremendous. In fact I believe you could create extreme anxiety out of a cake-judging competition . . ."

"I have just finished a giant Bond, provisionally called Thunderball . . . I have just begun correcting the first chapters. They are not too bad--it is the last twenty chapters that glaze my eyes."

"Thank you very much for your charming note of June 1st . . . Over here we are all watching with fascination your gallant attempts to harass American gangsterism. If James Bond can be any help to you please let me know and I will have a word with M."

To William Plomer, regarding You Only Live Twice, September 11, 1962:

"I have no idea how Bond in Japan will turn out, but I have in mind an absolutely daft story in which Blofeld meets his match."

"I don't think much of Harry Saltzman's new jacket for Goldfinger. The golden girl looks like a man and there is far too much jazz about the film. Why the hell should we advertise Saltzman and Broccoli on one of my books? And on the back I see that Sean Connery gets at least twice the size type as the author."

The book is full of these little glimpses into the world of Fleming and Bond. I loved it. 
And here are the Bond movies, so far: 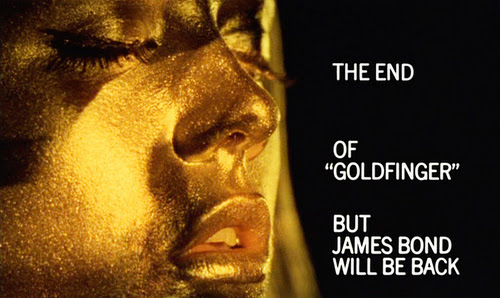 *Casino Royale also appeared in 1954 as an episode of the TV drama series Climax! (Barry Nelson was Bond) and as a spy comedy in 1967.

Most readers know that Fleming picked the name of his hero from a real book called Birds of the West Indies by James Bond, but there are a Bentley-load of other interesting facts about him as well. And Fleming did actually own a gold-plated typewriter--a gift to himself for having completed his first novel.

Part of my interest in all this came from the fact that I had read all the Bond books when I was in high school--my mother made me hide them if the local minister came to visit (because, I guess, of the cover art)--and I've seen all the Bond movies, several times each. Apparently I'm not alone: In the book, Fergus Fleming says it has been estimated that one in five of the world's population has seen a James Bond film.

I now plan to re-read all the novels and re-watch all the movies, in order--I have all of them right here on my shelves--and I'm already halfway through Casino Royale. I don't have any caviar in the house or an Aston-Martin in the garage or any Turkish-and-Balkan-blend cigarettes to smoke while I read, but I do have a tux in the closet if I need it, and I try to imagine that my glass of orange juice is a medium dry martini with a thin twist of lemon peel.

And my OJ was shaken, not stirred.