Brick by Brick (Some Disassembly Required)

Over the last year, my four-year-old son Dashiell and I have been bonding over Lego sets: race cars and motorcycles, a fire station, a police station, a ferry boat, a camper—even the Mystery Machine, complete with Fred, Shaggy, and Scooby, which was a little snow day project that quickly became one of the prides of our growing collection.

While we build these together, my job is technically to supervise, since he's already become a pro at following the directions, finding the right pieces, clicking them together, checking his work, moving ahead. Some of the smaller pieces have indeed proven a challenge for him—a precision he's trying to master—but I'm there to step in as needed. And I'll admit I'm enjoying all of it myself, revisiting one of my own favorite childhood loves and savoring brief getaways from work on the computer, from reading and grading for classes, from the constant struggling against one deadline or another. My wife Tara and some other friends have really gotten into the adult coloring book trend—many benefits to that, I know—but this seems a better fit for me. For my birthday middle of March, Tara and Dash got me a set of my own: the Lego Detective Agency—more than 2200 pieces!—and all of us have slowly been constructing that one together. "Only one level left!" Dash told the teachers at his school, who've been eager to see the finished product, three stories in all, including a pool hall, barber shop, and the detective office itself. Here are a couple of glimpses at highlights so far: 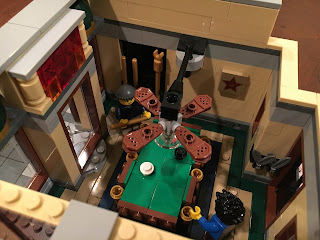 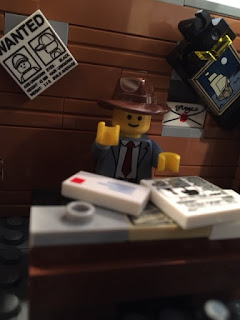 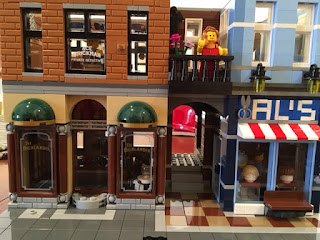 The sets are terrific, not only because of the great attention to detail but also because of the learning opportunities for Dash: those directions I mentioned, but also reinforcement on counting and shapes and sizes and then the longer-term lessons on patience and investment and payoff. But it's also great to see Dash build something out of his own imagination—diving into one of my own old tubs of Lego pieces, stacking up towers or gathering rough walls for a house or just stringing together some bricks, adding a few mismatched sets of wheels, and calling it a racecar.

That car of his own construction may never have the precision of those professionally designed packages, but I think he's just as proud of it—and I know I'm even more proud in many ways of seeing him conjure up something on his own. I wish I had a picture of one of those creations to share here, but I don't. Once we've finished assembling one of the kits we've been collection, it's COMPLETE—not a new project but a new toy and not likely something that he'll ever disassemble. But those made-from-nothing projects are ephemeral, endlessly worked and reworked, taken apart, made new, destroyed, refigured, again and again.

Lego pieces could surely lend themselves to a quick metaphor for writing: "Brick by brick" in the same way many of us repeat Anne Lamott's now-ubiquitous mantra "bird by bird." But I found myself thinking of Lego sets and pieces and writing in a different way while on a panel with Donna Andrews, Jack Bunker, and Meredith Cole during the Virginia Festival of the Book a couple of weekends back. During the q&a section of the panel, another writer friend, Anne DeMarsay, asked a question about what to do when your writing group says that some part of your work-in-progress simply isn't working and, try as you might, you don't know how to fix it (I'm paraphrasing, but that was essentially the question as I took it). My own first response wasn't very helpful, I realize in retrospect—something about keeping at it, about bull-headed determination, about banging your head against the wall until some dent is made (in the wall part of that metaphor, not in the head, I clarified). Donna offered better advice—which was to step away, quite literally, from the troubles; even a short time away from the computer can help to open up the imagination (a walk, a drive, a shower) and longer stretches might offer greater perspectives: I myself have put aside half-finished stories for years before coming back to them with fresh clarity, fresh perspective, forward progress.

And then I thought about my son, building, tearing down, rebuilding—none of it in frustration, but simply letting his imagination play.

Lego, I've recently discovered, comes from the Danish phrase leg godt, which means "play well." And the sense of "play" is something that's easy to forget about writing, which too often feels more like "work" to me and clearly to others. It is work, of course; whether we're writing as our full-time profession or on the edges of day jobs and other responsibilities, most of us who'd call ourselves writers are thinking of it as a career, often one with deadlines real or self-imposed, sometimes one with pay (and never enough). Writing is a business. But from a craft standpoint, in terms of the imaginative work that goes into it, writing should be play—indulgent, liberating, fun....even in those moments when it's tearing things down instead of building things up.

I recognize—no doubt—that there's a difference between a toddler dismantling a Lego tower (timber!) and a writer short on time ripping apart a scene or a story or a chapter that he or she has been toiling on. But the more I think about this as a metaphor, the more I find myself liking it or at least the perspectives it encourages: tearing something down isn't an act of destruction or loss; it's merely the next step toward bringing your vision into reality—and maybe the best approach is just to remind yourself to have fun with it all.

To shift metaphors here at the end: Not only is there light at the end of that tunnel, but maybe even a lighthouse—and an ice cream shop too. 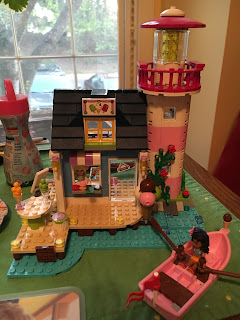