At 6:10 I was up and dressed, slipping out of the room with deliberate movements, careful not to wake either my wife or my son.

We had discussed this scenario the night before. "I hope you do it," she said. "I think it'll make you feel so great."

I was not yet three months old the first time I visited Cannon Beach, Oregon. My mother's family had been vacationing there for years by the time I was born.

My grandmother, born and raised a Nebraska farm girl, was always an early riser, and used to get up and out before the rest of us awoke, and take long, solitary, early morning walks on the beach. This was the subject of no little amusement on the part of the rest of my family.

But she was always finding interesting things on those early morning walks: colorful shells, wave-sculpted pieces of driftwood. Once she found a dead sea lion washed up on the sand. Another time she discovered a forty foot-long lifeboat lost in a storm by one of the luxury liners that plied the waters off the coast. (She got salvage rights on that one, and made the local paper, too.).

Most of all, she just seemed so happy after one of her excursions.

Once I was old enough, I convinced her to let me tag along from time to time.

The memories we made on those mornings are some of my happiest. My grandmother could be close-mouthed and tart-tongued. Standing barely five feet, she was indomitable will personified. Her nick-name growing up was "Serious Dorothy."

That has stayed with me throughout my life.

In fact, when I went into the military, I picked the Navy, partly because of what I considered a life-long love affair with the sea. Turned out it wasn't the sea I loved, so much as the coast.

And in my five decades on the planet, I've seen a lot of different stretches of coastline, on a variety of continents. Wild coast, civilized coast, touristy coast, deserted coast. Hell, I live in Puget Sound, which has some of the loveliest coastline you'll find anywhere.

And yet none of it has the effect on me that Cannon Beach does.

For those of you unfamiliar with the place, it's the "Goonies Beach" (the stretch of coastline featured at the end of the film "The Goonies."). It's rocky and usually windy, and altogether magical. Its most famous feature is Haystack Rock: the largest free-standing monolithic coastal rock in the Northern Hemisphere.

And on this particular Monday morning in April, with the sun not yet up, and the day promising to be both unseasonably warm and unseasonably sunny, I had the entire beach to myself.

It was just God, the Rock, and Me.

I came to Cannon Beach every summer of my youth, only ceasing to make the annual trek with my family when I went into the military at age 19, and couldn't make it home during that part of the year. And then there was college, graduate school, and carving out a career.

And sure, I've been back since, but not for any great length of time, and usually when the weather 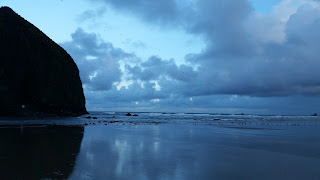 was so bad you'd be hard-pressed to tell where the rain squall you were trudging through ended and where the ocean began. And I've also stayed on the Oregon coast since. But with apologies to Gearheart, and Seaside, Rockaway Beach and Manzanita, none of those trips, all fun, all involving family, has filled me up in quite the same way those childhood romps on Cannon Beach did.

I well recall my final childhood walk on that beach. I'd just turned 18, and had hurt my right knee working for a salvage company that same summer. So during the week my family spent at the beach, I spent the majority of it on a couch with a view of the ocean and my nose stuck in a book.

On our final day there, with everyone, Mom, Dad, Grandma, Grandpa, my brother, aunts, uncles and cousins all out of the house, I decided I'd been cooped up long enough, and started hobbling down the beach, brace and all. By the time I decided to turn around, I'd walked the five miles down to Hug Point!

I can dimly recall what came after. My parents walking down the beach looking for me, looking relieved and happy when they encountered me, tired and happy (and with a throbbing knee!) returning up the beach. That, along with the pleasant stroll we shared up that stretch of sand, past the Rock and to our rental just north of it, that stands out in stark relief. But starting college a month later, feeling rudderless and eventually joining the navy, well, that's all kind of a blur.

But that last walk on the beach?

It was just the thing for me.

And apparently it still is. Because on the first Monday morning in April of this year, I did the same thing. As before, it was our last day of vacation. Only this time my knee wasn't in a brace (still aches when it's gonna rain though, go figure). And this trip it was just myself, my wife, and my not quite four year-old son. And when I'd mentioned I was considering getting up early and walking the mile or so it took to get to Haystack from our hotel room, my late riser wife was all for it. She'd handle our son (no mean feat). I could have the time and the headspace and the experience.

...And the spirit of my grandmother. And my parents walking beside me. And two days before, when I walked that beach for the first time with my own son. (Yep. That mysterious figure...).

We all have our Happy Places, the ones that are a part of us, and of which we are a portion (with apologies to the ghost of John Donne). Up until my most recent trip to mine, I'd been struggling with a couple of long-term writing projects, wondering whether I'd lost the touch that allowed me to write and publish ten books in six years.

I'm married. And a father. And if my latest tax return is to be believed, a home owner. Now don't get me wrong. I love being married. And I love being a father. But these roles don't come with a light load when it comes to responsibilities of the time and headspace-consuming varieties.

And also for me, writing is a part of me. Not being able to get any real traction in a good long while had begun to make me feel I had a cramp in a muscle I couldn't locate. In its own way, my being blocked by lack of headspace/time had become its own variety of distraction.

I'd been feeling for a while like I needed to find some way to reset the mechanism. Too much precious time I'd spent in front of the monitor and keyboard, tapping away and getting nowhere. So when my wife asked where I'd like to go for my birthday this year, the choice popped right into my head. 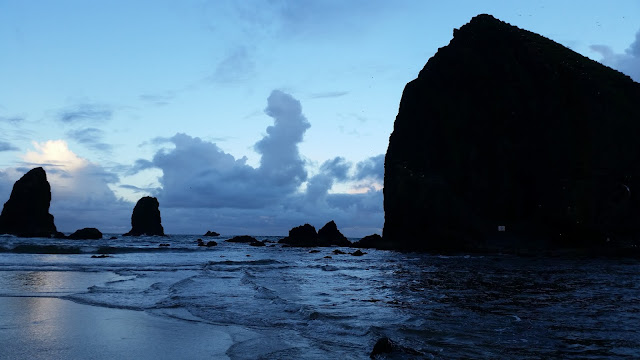 And God love her, she made it happen.

And as I and my personal ghosts communed on that not-so-lonely stretch of beach on that lovely, windy, sunny, gorgeous Monday morning, I felt light, as if relieved of a great weight. And as if the scales before my eyes had dropped, and I could see again.

And once and again, as i sit down to write, I embody wonder. While mentally reliving the youthful gambols of my more tender years, I give voice to glee. And through it all, I am the face of rapture.

The very countenance of joy.

Posted by DoolinDalton at 03:01