It was a great grief to me when, sometime between the late ’50’s and the ’70’s, publishers stopped illustrating adult fiction. Not that illustrations for adults ever rivaled the glories of children’s books. Forget the full color splendors for volumes like Treasure Island created by N.A. Wyeth or the marvelous line of  John Tenniel’s pictures for Alice in Wonderland.

Just the same, quality novels often had line drawings to enliven the blocks of text which too often today are set up tight to save paper or, in the case of certain popular authors, given ludicrous amounts of spacing and giant margins in order to create a “big” book. Would we had pictures with either or both!

For a time in the ’80’s the lack of illustrations was to some extent compensated for by the care and technical skill of cover art. The book jackets Houghton Mifflin supplied for my first four Anna Peters novels, had beautifully wrought and realistic collage paintings, done by hand, mind you, not on the computer. And this for what were definitely ‘mid-list’ novels. Those jackets, too have gone by the board.

I’ve been thinking about illustrations, especially illustrations for mystery novels and stories, because during a dry spell in painting, I did covers and illustrations for two little three-story collections. I wanted to learn how to put up ebooks, and thought that three mystery short stories (originally published in Alfred Hitchcock and Sherlock) and three stories of the uncanny  (two unpublished, one in the old Fantasy Book, would make good test projects. 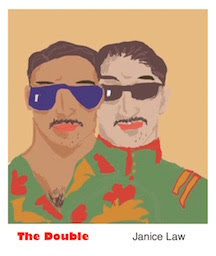 Thanks to the kindness of a very patient techie somewhere in Texas, The Double, (the mysteries) and The Man Who Met the Elf Queen are now available for 99¢ from iBooks. The Elf Queen book has chapter illustrations, too. Thus ends the commercial!

All the illustrations were done freehand on my Wacom drawing slate with an electronic pencil. Not everyone likes the process: basically one holds the pad in one hand and “draws” on the white surface with the pen, producing lines over on the computer screen. A certain ability to disassociate is probably helpful, but I like it a lot, because it is easy to combine line with perfect flat areas of color, flowed in via an icon that looks like a bucket.

The only caveat is that enclosed areas must be perfectly enclosed. Even one pixel missing and the flowed color swamps the entire image. Thankfully, there is an Undo button, and even for someone who is not neat and tidy, the bucket tool enables the creation of perfect flat ‘print like’ areas of color.
So much for technique.

The bigger problem for the non-professional is, I think, consistency of image. It is not too hard to produce an attractive illustration. What is difficult is making a character look recognizably the same in different settings and from different angles. I now appreciate another difficulty. The writer has a notion of what a character, setting, or action should look like and, having suggested that satisfactorily in print, she is sometimes surprised by the changes the illustrator produces. But graphic design has its reasons. When I finished the drawing of the Elf Queen, I thought to check my story. Oh, dear, she was supposedly wearing a sable trimmed cloak! Too bad, the addition of dark brown fur, in addition to being more work, would upset the color balance. 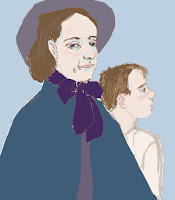 Similarly, the Magus in The Potion of the Empress had dark eyes in print, unsurprising as he was an ancient Roman. However, both an older drawing done in an early Apple graphic program, and my new color version, gave him a chilly light eye, very necessary given the shadows that formed his background.

If nothing else, trying to devise pictures for these little web books has given me sympathy for the illustrators at AHMM who have been illustrating my Madame Selina stories. Do they fit my ideas of the medium and her assistant? Usually not, or not entirely, but they are none the worse for that, being appropriate in size and pattern and style for the magazine and all different, too, which is really interesting.

Just the same, I thought I’d try my hand at both her and Nip and was pleased with the results, but I know better than to attempt a series of panels where I need to keep their features and expressions consistent. Amateur drawings can be lovely but the graphic novel – or even illustrations for a series – are best left to the pros.
Posted by Janice Law at 00:00