Lost and Found—and Tasty Too!


by Art Taylor
I've mentioned before—and often—how I was a big fan of the Nancy Drew books as a child, and while I respect and understand my colleague B.K. Stevens' frustration with them, I never experienced any of those feelings myself. I stayed—and still remain—enamored of both the character and the series. (I've even taught a Nancy Drew book in my classes at George Mason and plan on doing so again in the fall. Plenty to talk about there, which I'll likely revisit here when the time comes.)
So much of a fan was I that sometime in the late 1970s (or was it early 1980s?), I ordered a copy of The Nancy Drew Cookbook: Clues to Good Cooking, and while I can't remember the year, I do remember distinctly the moment of picking up that special order from The Book Cellar in Jacksonville, NC, and more specifically several layers of mixed emotions about it: excitement about the possibilities the book offered, since I also loved to cook (and still do); amazement at this joining together of two things I enjoyed so much; and—admittedly—a little self-consciousness about both those enthusiasms, there on the eve of my adolescence and clearly aware of how strongly each of them leaned toward "girl" stuff.

No matter. It was mine and, hesitations be damned, I loved it.

Fast forward to more recent years and to my wife Tara and I collating our respective editions of Nancy Drew on a shared shelf after we got married. Whose copy of each title was nicer? Which ones were we still missing? What to do with duplicates, and how to track down the ones we still needed?

And then: where was that cookbook that I know I had?

Despite my best efforts to go through the boxes of books I'd relocated from my parents' house to my own home, it never turned up—until a couple of weekends ago during a visit to North Carolina when I discovered some other boxes up in the attic, boxes of younger children's books, picture books, etc. Pulling those down to explore for my own son (who's now 4), I found that tucked in among that stash of books the title I thought had been lost for good. 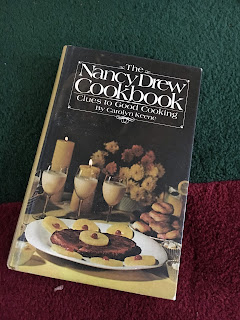 Memory is a fickle thing, of course. Looking through the book now, I can't remember which recipes I might have made all those years ago. But I did immediately begin noting which recipes I wanted to try today. Many of them are fairly standard recipes, as you can imagine, the kind of thing I imagine might have been taught in Home Ec classes around that time; as the introduction from Carolyn Keense states, "Nancy's friends have helped with her cookbook and Hannah Gruen has lent advice. Bess likes rich foods, George the slimming ones. The boys are experts on barbecues, picnics and beach parties." Of course, all of the recipes come with clever names tying into the world of Nancy Drew. Among the ones I've got my sights on now: Hollow Oak Nest Eggs, Ski Jump Hot Chocolate, the Mapleton Milk Shake, A Keene Soup, and Missing Map Cheese Wafers. And we've already made one, which turned out simply delicious and which I decided might be worth sharing here. 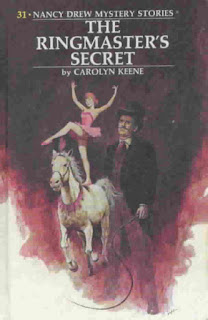 Wash the chicken and dry with paper towels. Mix together sour cream, Worcestershire sauce, hot sauce, garlic salt, paprika, and salt. Place the chicken breasts in this mixture and leave in the refrigerator overnight to marinate.

Take the chicken out of the mixture and roll each breast in the bread crumbs. Put them in a large baking dish, arranging them in a single layer. Cover the dish and place in the refrigerator for at least 1 1/2 hours.

Heat the oven to 325°. Uncover the dish and bake the chicken for 1 hour and 15 minutes.

EXPERIMENT
Make your own bread crumbs: crush stale bread or crackers with your fingers, then sift them until you have a cup of fine crumbs.

Two weeks from today, Malice Domestic will already be underway, as Barb Goffman previewed a couple of days ago in her own post—and congrats to her and to B.K. Stevens for being Agatha Award finalist in the short story category and to B.K. for also being a finalist for her YA novel Fighting Chance. I'm pleased that my book On the Road with Del & Louise: A Novel in Stories has been named an Agatha finalist for best first novel (the full list of finalists in all categories is here), and I'm thrilled to be appearing at several events throughout the weekend. Here's my schedule for the convention—busy busy each day!
Looking forward to seeing old friends in a couple of weeks—and to making new ones too!
Posted by Art Taylor at 00:00